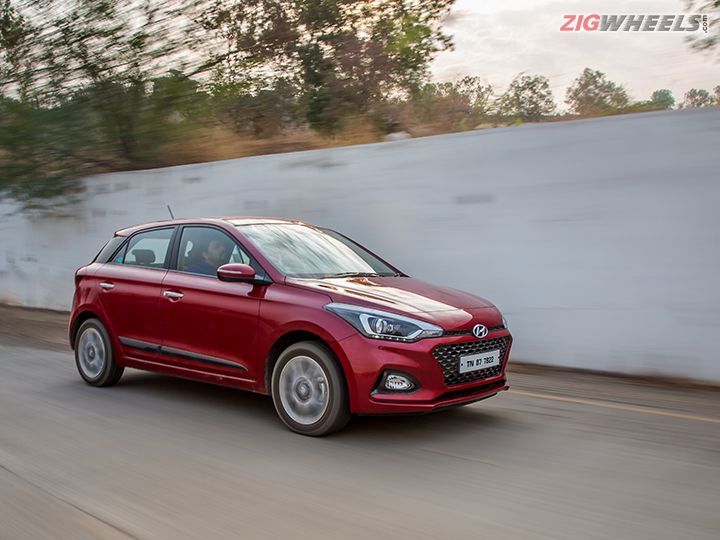 The Hyundai Elite i20 looks as sharp today as it did when it was launched. Over the past few years, Hyundai’s given it a few updates to make sure it didn’t fall behind any of its competitors, primarily the Maruti Suzuki Baleno, Honda Jazz, VW Polo and even the new Maruti Suzuki Swift.

And now, the Elite i20 has received its first official facelift. But first, some honesty - the reasons to buy the new Elite i20 remain pretty much the same as before. However, there are five primary aspects in which this version is different. Here they are.

There haven’t been any major revisions under the bonnet. So you still get the same 1.2-litre petrol (83PS/115Nm) and 1.4-litre diesel (90PS/220Nm) engines, paired with 5-speed and 6-speed manual transmissions respectively. However, Hyundai claims the fuel efficiency of the engines has been improved by up to 9 per cent.

The diesel engine’s tuning has been revised too and even though the output figures are unchanged, throttle response is smoother and driveability has improved noticeably. We tested the diesel and managed to extract 15.32kmpl in the city and 21.29kmpl on the highway. That aside, the ride quality feels plusher with slightly improved damping, rebound management and reduced body-roll while cornering.

On the flipside, the fuel tank capacity has dropped, down from 45 litres to 40 and we haven’t been able to get a reason why.

As you’d expect of a facelift, the most significant changes are cosmetic. Up front, the Elite i20 sports the new Hyundai family grille, which essentially gives the old grille a shot of botox. That aside, the front bumper looks sharper and gets smaller front fog lamp enclosures. A cool touch here is that they include slim air curtains to reduce drag.

The only noticeable changes on the sides are the restyled 16-inch alloy wheels of the Asta dual-tone and Asta (O) variants. They’re a direct lift off the European-spec i20 and look quite sporty.

It’s the rear end where the changes are easier to spot. The number plate has been moved from the bumper to the boot; the bumper itself gets an Xcent-esque black insert and the tail lights get revised internal detailing (they still aren’t LEDs but do look the part).

Also, no more ‘VTVT’ or ‘CRDi’ badging at the rear and you’ve now got two new colour options - ‘Fiery Red’ and ‘Passion Orange’. Our test car sports the prior and for the life of us, we can’t tell the new red apart from the old ‘Red Passion’.

No drastic changes to the features list. You still get the same 7.0-inch touchscreen infotainment system, but with a revised user interface and the Arkamys sound tuner. Hyundai has also added the Auto Link telematics app, which lets you access information like your travel time and distance travelled, and even gives you instances of hard braking or acceleration and more, remotely.

The central armrest not only gets storage but also slides. For some odd reason, however, the 60:40 split rear bench is no longer available. Also, a miss here is that ISOFIX, like side and curtain airbags, has been limited to the Asta (O) variant when it should’ve been offered as standard. That said, ABS and dual airbags still come as standard, irrespective of the fuel type or variant chosen (you hear that, Honda?).

Inside, the changes are of a blink-and-you’ll-miss variety. The buttons between the central AC vents, for example, no longer sit flush and one of the 12V power sockets ahead of the gear lever has been replaced by a USB port. The MID is a little more comprehensive as well, as the all important distance-to-empty and average fuel efficiency readouts can now be seen here. There’s also some nice attention to detail as the parking sensors display/door ajar warning show you the new Elite i20 in the advanced Supervision cluster (Hyundai talk for multi-information display).

The dual-tone paint option is only available with the Asta variant and unlike the standard Asta, it gets adjustable rear headrests and the aforementioned 16-inch alloy wheels. The added cost is Rs 25,000 over the standard Elite i20 Asta.

Speaking of which, the standard Asta isn’t any cheaper than before but loses features like the smart key, leather steering/gear lever and no longer has readouts like the service reminder or parking sensors shown in the MID. The diamond-cut 16-inch alloy wheels have also been ditched in favour of a set of 15-inch gunmetal finish alloys.

Finally, the 1.4-litre petrol Magna AT variant has been discontinued. To that, we say good riddance. The engine’s size meant that the Elite i20 wasn’t eligible for the excise duty benefits sub-4 metre cars get and to top it off, it employed an outdated 4-speed automatic transmission. Don’t fret though. Hyundai will be offering a CVT with the 1.2-litre petrol around May 2018, much like the Honda Jazz and the Maruti Baleno, which we’re certain will be more competitively priced and fuel efficient.

That’s how the new Elite i20’s been updated. Hyundai’s done just enough to make it fresher. Some changes are for the better, while some aren’t. Quite simply, it is a distinction without really being all that different. Overall, we’d say it's a job pretty well done.