We finally get our hands on the long awaited Ford Figo Aspire compact sedan. So does it have what it takes to take on the likes the Maruti Suzuki Swift Dzire, Honda Amaze and the Hyundai Xcent? Read on to find out. 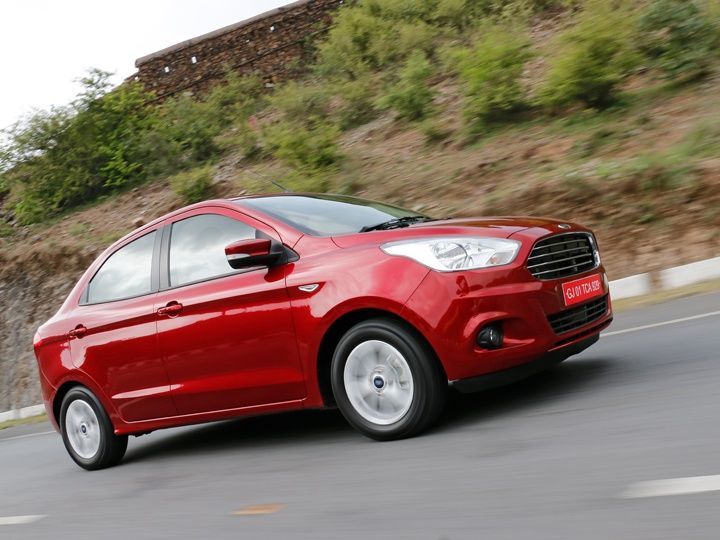 Every time the government decides to throw a curve ball and add yet another automotive regulation, the automotive manufacturers come up with yet another ingenious solution to their problems. In India we have the misfortune (or fortune, depending on how you look at it) of the government issuing excise duty relief to cars that are under the 4-meter mark to reduce congestion in crowded cities. This rule has resulted in India specific cars like the Honda Amaze, Hyundai Xcent and of course, one of the best selling cars in India, the Maruti Suzuki Swift Dzire. So does the new Ford Figo Aspire have enough potential to take these on?

The original Ford Aspire (available only in America) from the 1990s was essentially a basic stripped out car for the entry level buyer and it looked like one. This new namesake thankfully does not. In fact, the new Aspire is one of the more handsome looking cars in its class especially when viewed from the front. With its large ‘Aston Martin’ inspired grille festooned in chrome in typical Ford design language. The large headlamps are not as well detailed as we would have like them to be but aren’t bad looking either. That said, although not immediately evident too, is the fact that the lower half of the front bumper does look a little abrupt and stubby which might not appeal to few. Although we expected a daytime running light option, there isn’t one and neither is there a projector headlamp setup, which is a bit of a disappointment.

The side profile of the Ford Figo Aspire is nicely sculpted and makes the most use of a well defined waistline to break up the mass of the car. The slightly flared wheel arches too look right in place. In fact, the Aspire is a genuinely well designed car that looks like it was intended to take the form that is currently is in as compared to some of the other cars in the category that look like a cut and paste job.

The simple and elegant design continues around the back with considerably flat and yet well layered bootlid and bumper combination. The large chrome strip on the boot though will certainly attract the typical Indian customer. That said, the rear end does look a tad bit too plain-jane and could have certainly been tarted up a little bit more. The wheels, a set of 14-inch alloy wheels too look inspired from the older Fiesta sedan and are not as exciting as some of Ford’s other products.

The Ford Figo Aspire gets a dashboard that follows Ford’s recent design philosophy to the T. The Aspire gets a prominent V design dashboard that houses an infotainment screen and an array of buttons which control the phone and media controls. Essentially, the insides of the Ford Aspire looks very similar to the likes of the Ford Ecosport and the Ford Fiesta. We also like the well sculpted steering wheel and instrument cluster binnacles. We particularly like the actual speedometer and tachometer console too which is both clear to read and displays all relevant information.

Where the Figo Aspire does score extremely high is when it comes to storage spaces….of which there are 20 of them! In fact, there was clearly a lot of thought that was put into general storage options for this new car.  Out favorite is a small cubbyhole on the side of your dashboard that you could put your phone in if you decide to leave it behind in your car. Talking about storage spaces, the large 359 litre boot and the huge glovebox which incidentally is large enough to fit a laptop into.

Just like its bigger brother, the Aspire has a set of comfortable and yet sporty front seats that offer a good level of comfort. We particularly like how the seats offer a good overall level of lumbar support which could be really helpful while traversing long distances. The rear seats in particular are the some of the best in its class and offer a considerable amount of space mainly due to the well sculpted front seats.  Shoulder room and head room too is great considering this is still a sub 4-meter sedan! And not to forget, the top of the line Ford Figo Aspire does come with a beige leather interior option which is a first in class feature.

The Ford Figo Aspire as expected comes loaded with all the possible gadgets that one might expect from a car in this category and then some. You obviously get Bluetooth telephony, an integrated audio infotainment system with phone controls and steering mounted audio controls. You also get a height adjustable steering wheel and driver’s seat along with electronically adjustable outside rear view mirrors with an electric folding option.

Ford has also taken an interesting approach to a smartphone mounting dock and integrated it well into the central dashboard architecture. You also get what Ford calls a MyKey which is essentially is like a central control over system settings like the speed limiter, seatbelt reminder and the infotainment volume limiter.  The Ford Figo Aspire also comes with an automatic climate control and Ford’s SYNC applink that integrates your smart phone or tablet with the infotainment system.

What really does impress us the most though are the safety features that the Ford Figo Aspire comes with. All versions of the Aspire come standard with ABS and two airbags. The top of the line Aspire on the other hand comes with a staggering six airbags which is a first for a car in this segment. The Figo also comes with additional features like hill start control, which too is a first in its class.

The Figo Aspire does not however come with a start-stop button which is available in both the Hyundai Xcent and the Maruti Suzuki Swift Dzire. The Aspire also does not get a set of rear parking sensors or a reversing camera as a part of standard equipment but is an official integrated accessory for the Aspire that buyers can ask for when they buy the car. Other accessories include ambient lighting at startup and an illuminated scuff plate.

Having driven the 1.2-litre petrol and 1.5-litre diesel, both of which come with a manual gearbox, the diesel is obviously the one you should go for. Not only does it pull really well in almost any gear from way down in the rev range, it also feels great higher up in the rev range. That said, it is a tad bit noisy both on the outside and on the inside. We also like the way the gearbox is laid and although shifts are not as crisp as the likes of the Dzire, they aren’t all that bad either. On the flipside, the petrol does feel very underpowered and slow to respond to any sort of enthusiastic driving. The 1.2-litre petrol may have 88PS on paper but it does struggle to get up to speed. And strangely, the petrol does feel a little rougher and noisier than it should too. All in all, the diesel is certainly a winner between the two.

Ride and ease of driving  rating_4.0_rating

Ford has always tuned their car’s suspension to be stiffer than its competition and the Figo Aspire is no exception. That said, we are surprised how well the boffins in Sanand and Chennai have managed to get the balance between ride comfort and suspension stiffness just right. There is no real bounciness or bottoming out of the struts and the Aspire holds its ground over rough terrain with great finesse. Is it the best riding car in the segment? Possibly.

The Figo Aspire’s height adjustable drivers seat can literally suit any driver no matter how tall or short. In fact, we don’t remember the last time we encountered a seat with this much travel. The Aspire is an easy car to drive to due to its compact proportions and large windscreen that offers a great view outside the car. Even the A-pillars do not obstruct vision as much as some of the other cars in its segment.

True to every single Ford we have driven in the recent past, the new Ford Figo Aspire showcases good driving dynamics. Although we would have preferred to see a set of 15-inch wheels and tyres that the Fiesta gets, the Asprie gets a set of 14-inch wheels with 175/65 R14 tyres. That said, the smaller wheels and tyres seem to have been well tuned and balanced for the Aspire platform.

Bigger cars like the Fiesta have always felt a little tiring to drive inside the city due to its heavier steering feel. The Aspire, although not as heavy as the Fiesta does return great feel especially when combined with the chunky steering wheel that we spoke about earlier. The Aspire is also much easier to drive in start-stop traffic and much easier to maneuver into tight parking spots due to this steering feel.

Just like the Ford Ecosport before it, expect the new Ford Figo Aspire compact sedan to be priced extremely competitively. We predict prices for the petrol starting at a smudge over Rs 5 lakhs and ranging to about Rs 7 lakhs for the top of the line variant. The diesel on the other hand should be priced between Rs 6-8 lakhs if it realistically wants to take on the likes of the Maruti Suzuki Swift Dzire and Hyundai Xcent. In terms of fuel efficiency or mileage, the Figo Aspire 1.2-litre petrol manual offers 18.61kmpl while the 1.5-litre petrol automatic offers 17kmpl. The diesel motor on the other hand offers 25.83kmpl which is quite an impressive figure.

On the whole, the Ford Figo Aspire is a very good proposition. It isn’t run of the mill like its competition and certainly offers an angle of fun and excitement that some cars in the segment. It looks handsome, has well made interiors and drives well too. And on top of that it, it does have a set of features that not many other cars in India have. And did we mention how safe it is? All in all, as a culminated package, the Aspire might just have what it takes to repeat for Ford what the Ecosport did a few years ago. In our opinion, the Ford Figo Aspire is certainly a car to consider if you looking to buy a sub 4-meter compact sedan in the near future.

Recommended Variant : Figo Aspire 1.5 TDCi Trend
Was this article helpful Yes No
Sorry about that