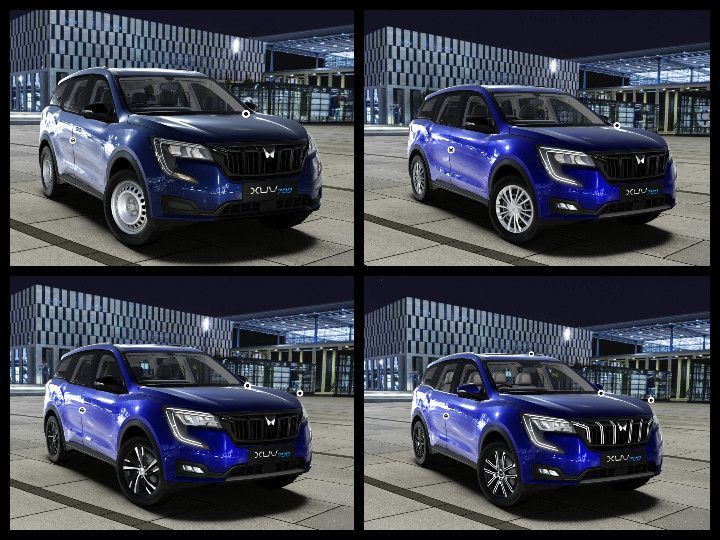 The just launched Mahindra XUV700, priced from Rs 11.99 lakh (ex-showroom), comes in two broad trims: MX (entry-level) and AdrenoX (AX3, AX5, and AX7). In this report, we will be explaining about all the variants in detailed images.

As evident from the image above, the halogen headlamps and lack of plastic wheel covers and fog lamps make it quite evident that the MX is the base variant. However, LED tail lamps are standard on all variants.

The XUV700 MX will be offered as a 5-seater only. It relies on analogue dials but it has a large 7-inch multi-info colour display like the Kia Sletos and Hyundai Creta. It has a smaller 8-inch infotainment system compared to the 10.25-inch in AX variants. Features include Apple CarPlay and Android Auto, manual air-con, steering mounted audio controls, dual airbags, ABS with EBD, and rear parking sensors.

Powering the XUV700 MX is a 200PS 2-litre turbo-petrol and 155PS 2.2-litre diesel engine, paired with a 6-speed manual transmission only. The automatic option is limited to the AX trims only. Also, the diesel engine is 30PS low on power to the AX variants.

The AX3 is the entry-level variant in the AdrenoX (AX) lineup. This variant relies on steel wheels as well, however, it gets plastic wheel covers. It still doesn’t get LED headlamps, but fog lamps are offered as standard from here onwards.

All powertrain options in the AX3 are offered as a 5-seater. However, you can opt for the 7-seater in the diesel-manual by paying a Rs 60,000 premium. The cabin also looks much posher, thanks to the twin 10.25-inch screens comprising the infotainment and digital driver’s display. That said, you still have to rely on manual air-conditioning.

Other notable features in this variant include Alexa connected car tech, wireless Android Auto and Apple CarPlay, and a 6-speaker sound system.

The specification of the 2-litre turbo-petrol engine remains unchanged. However, the diesel engine develops 185PS and up to 450Nm in the AX. Both engines are offered with manual and automatic transmissions.

The main visual difference here is the presence of 17-inch alloy wheels and LED headlamps. The LED tail lamps also feature sequential turn indicators that impart a much more premium experience. Apart from that, there are no major visual changes.

This is the entry-level trim if you want a petrol-powered XUV700 7-seater. Even the cabin design is very much similar to the AX3. Also, this being one step below the top, it only gets manual air-conditioning instead of climate control. Other notable features onboard include cornering lamps, panoramic sunroof, electronic stability control, and curtain airbags.

The specifications of the powertrain are exactly the same as the AX3.

The AX7 is the top-spec variant in the XUV700 lineup. It can be easily differentiated with the larger 18-inch alloy wheels and the contrasting (read: tastefully done) chrome elements on the grille.

This variant can be had only as a 7-seater. It also sees a major jump in features, thanks to the addition of dual-zone climate control, powered driver’s seat with memory function, leatherette upholstery, and most importantly, autonomous driving aid features. The last one bundles adaptive cruise control, lane departure warning, autonomous braking assist, and forward collision warning.

Even the engine specifications are similar to the AX5 and AX3. However, the AX diesel-AT model offers an optional all-wheel drivetrain. Nope, you can’t get AWD in the diesel manual or petrol engine options.

L is the abbreviation for the optional Luxury pack in the AX7 automatic variants for a Rs 1.8 lakh premium. For the extra dough, you get these additional features:

Sadly, you can’t bundle the optional all-wheel drivetrain and luxury pack together in the diesel-AT model.

To know our impressions on the Mahindra XUV700, read our in-depth first drive review. The attractive pricing of Mahindra’s midsize SUV puts it in contention with the Hyundai Creta, Kia Seltos, Skoda Kushaq, VW Taigun, Tata Harrier/Safari, MG Hector/Hector Plus, and Hyundai Alcazar.