Ford Figo: What’s New In The Facelift? Old vs New

It looks new-ish, it gets new features and all-new engines too. Let’s take a closer look at what’s new in the 2019 Ford Figo 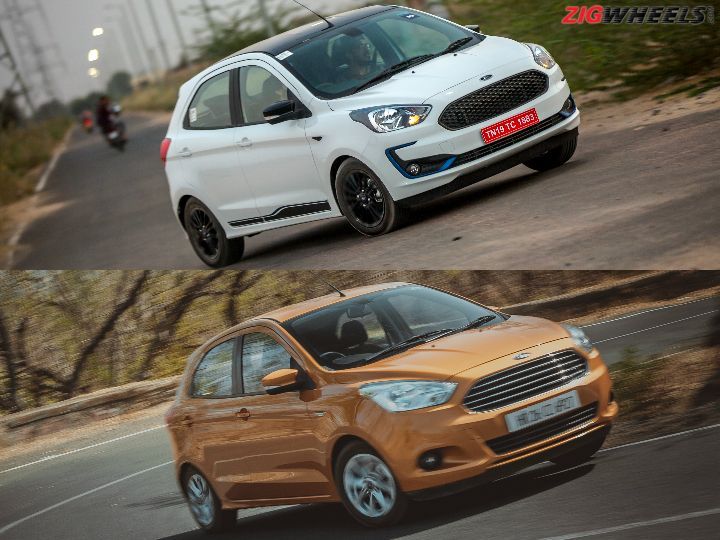 The Ford Figo has been given a facelift four years after the car made its debut in the Indian market. With the update, Ford has brought the Figo up to speed with the rest of the competition, but we are not pitting it against the competition today - we are pitting it against its former self to see what’s new, and if that has made it better on paper.

The Ford Figo facelift, as all facelifts go, is nothing more than a nip-and-tuck job. It’s not revolutionarily different but looks fresh enough to be called new.

Up front, the new front bumper gets a slimmer but wider air dam, which seems connected to the fog lamps by a black coloured trim which curls up and inwards at the corners. This is a similar design to what was first introduced on the Ford Freestyle and later on the Aspire, but the Figo has a unique look. The headlights have been given a subtle revision and on the top-of-the-line ‘Blu’ variant (of which we have photographs), the headlamps are darkened for that sporty look. The grille design has been changed, it gets a mesh design instead of slats.

From the side, the new Figo looks no different from the older car. While the Blu does get new graphics on the door panels and new 15-inch wheels, you could get these on the earlier ‘Sports’ variant too. Like the pre-facelift car, the new Figo is still offered with 14-inch wheels in the lower spec variants.

At the rear, the only difference is the new bumper, which mimics the design seen on the front unit.

Inside, the Figo’s design remains the same except for one big detail - the new Figo now gets a 7.0-inch touchscreen in the Titanium variants, instead of the primitive looking dot-matrix display/’Dock’ system on the older car.

The diesel engine has been left untouched, it remains one of the more powerful engines in its segment. What has changed, and what the numbers won’t show you, is that the Figo now gets a new 5-speed Getrag-sourced 5-speed manual transmission which is better to operate.

The petrol engines, on the other hand, are all new. The displacement numbers may look the same, but the new Figo now uses 3-cylinder ‘Dragon’ series engines like the rest of the Ford lineup in India, instead of the 4-cylinder units used before. Despite being one cylinder down, both the petrol engines develop more power than before.

The petrol variant also gets 3-cylinder power, along with a new 6-speed torque converter. The older car’s surprisingly lethargic dual-clutch transmission has been given the boot, the new Figo automatic should be better to drive.

The 2019 Ford Figo now gets rear parking sensors and day-night IRVMs as standard, unlike the model it replaces.

The new top-of-the-line Titanium Blu variant gets automatic headlamps, rain-sensing wipers and a leather steering, which were not available on any variant of the older Figo.

Also new are rear adjustable headrests, a rear parking camera display on the central touchscreen and passenger seatbelt reminder. While limited to the Titanium models, these are features previously not offered on the Figo.

The Figo remains the only hatchback in the segment to offer 6 airbags, through dual front airbags, ABS and EBD are offered as standard. The petrol-AT also gets ESP, traction control and hill launch assist - though these are not unique to the segment.

This is where things get interesting, discounting the fact that the Figo loses out on a top-of-the-line Sporty variant with revised suspension, steering setup etc., the new Figo is more affordable than the outgoing model - variant to variant. This is commendable, considering the fact that the new Figo does offer a refreshed design, a modern interior and better petrol powertrains. Here’s how the prices compare.

Do you think the new Figo is now better than before? Could Ford have done better? Let us know in the comments section below.