With the most powerful engine in the Figo range and a dual-clutch automatic transmission, is this the affordable performance hatchback you've always wanted? 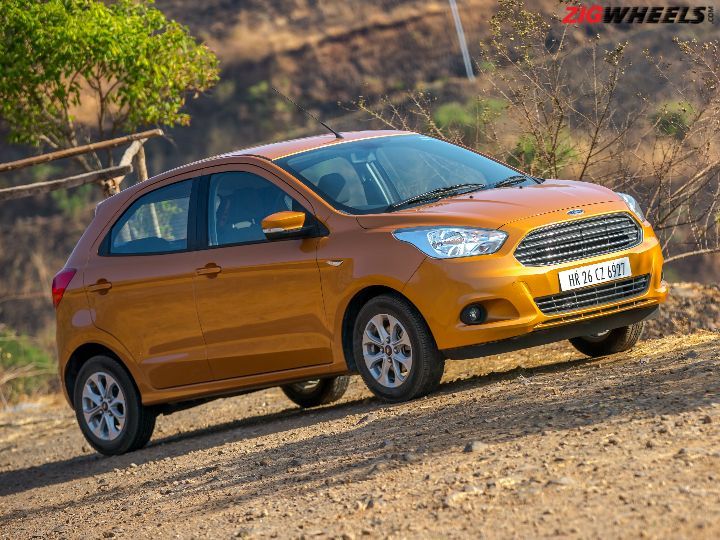 If there was one consistent complaint about the previous generation Ford Figo, it was that both its engines lacked outright grunt. This was more evident in the petrol-powered hatchback where the 1.2-litre, 4-cylinder motor developed only 71PS of maximum power and 102Nm of peak torque. With the launch of the new Figo, Ford finally answered the prayers of many enthusiasts. You can now buy a Figo powered by a 1.5-litre, 4-cylinder, naturally-aspirated petrol motor developing 100+PS (112PS to be precise) of power! However, there is a slight twist in the story - it is only available with a 6-speed dual-clutch transmission. But, that's even better, right?

The Sparkling Gold (yellowish orange, I think - or is it orangish yellow?) paint on the test unit I was driving was the only thing that made most people take notice. The rest of the design is not as captivating, till you take the time to notice the tiny details peppered all around. From the front, the Figo looks understatedly good. The large swept-back headlamp units, sculpted bonnet, gaping chrome-lined grille (a design inspiration from Aston Martin?) with horizontal chrome slats, blacked-out air dam, body-coloured lower lip and recessed fog lamps are the highlights here.

Look at it from the side, and the Figo loses out on design flair. While there are strong creases on the car, like the one that flows from the headlamp all the way to the tail lamp, or the one that starts above the front wheel arch and goes through the door handles, the Figo tends to look a bit heavy and the small alloy wheels add some blandness. The large ORVMs with integrated indicators, blackened B-pillar, large windows and gently sloping roof line are the highlights here.

At the rear too, the understated but smart looks continue. The short roof-mounted spoiler with the integrated stop lamp, wraparound rear windshield, large taillamps, and the large bumper make up the rear. A noticeable bulge in the hatch door which forms a line connecting the two tail lamps makes the rear look less bland. There are only three badges on the boot lid - Ford's blue oval, the Figo nameplate and a badge denoting the variant. So there really isn’t anything that makes the automatic look more desirable or spicier from the manual variant.

Inside, the Figo gets an all-black theme with dulled silver inserts. The 1.5 petrol AT variant is only available in the Titanium trim and thus loses out on many important features which the top-of-the-line manual transmission-equipped Titanium+ trim gets, and also happens to be cheaper than the auto. Some of the glaring omissions include Ford’s SYNC communication and multimedia system and a 4.2-inch display, rear parking sensors and an option to add side airbags (which is available on the Titanium MT trim).

Ford does offer an innovative 'MyFord Dock' in place of the multimedia screen, which allows you to place your smartphone horizontally and use its inbuilt features instead of a dedicated multimedia screen. For those who own large-screen smartphones, this does open up more possibilities - they can use any media and live navigation app they want.

Connecting the phone to the car's multimedia system is not straightforward, the two-line MFD screen is not easy to read and the menus are not intuitive to use. The plethora of buttons around the small multimedia screen could have been designed better to work around its shortcomings. However, once you do manage to connect a media device, what you will appreciate is the sound of the stock 4-speaker system - meaning speaker upgrades are only necessary if you are an audiophile.

It feels like Ford has designed the Figo keeping in mind that many owners of the car will travel with their family/friends - there are plenty of storage spaces around the car. In total, there are three bottle holders (one each on the front doors and one on the floor-mounted centre console), four cup holders (one each in the front door pads and two on the centre console) and nifty spaces to keep all small but important things you may have.

Amidst all this poking around there is one thing that stands out - everything feels built to a price. The doors open and close with a clunk, the plastics on the dashboard and door pads are hard and sound hollow when tapped, the seats could do with better contouring, there is no keyless entry-and-go system on offer and a bit of leather/faux leather covers around the cabin could also have helped make it feel better. Getting into a comfortable driving position will be easy though. The steering wheel is tilt-adjustable, the driver’s seat is six-way adjustable including for height and, most importantly, the seatbelt height is adjustable too.

The large raked front windshield, along with the large side windows, gives you a good view of your surroundings. However, depending on how you adjust your seat, you may face some blind spots due to the combination of the thick A-pillar, bulky ORVMs and the B-pillar. The view out back is not great. The ORVMs may look bulky from the outside but the mirrors are not large enough horizontally. Reversing the car is tedious because of the lack of a reverse parking sensor system or a reverse camera.

Plug the slim key into the keyhole on the right side of the steering column, press the brake and twist it to start the car up and the engine wakes up with a small bark from the exhaust.  The gearstick is a simple looking unit with a straight gate with Park, Reverse, Neutral, Drive and Sport positions. Two buttons marked '+/-' on the side of the gear knob allow you to manually operate the gears, but only when the gearstick is in the Sport position.

Press the brake, slot the gear into 'D' and release the brake - the Figo creeps forward smoothly. The accelerator is very responsive to inputs and as when manoeuvring at low speeds the suddenness with which it can jump ahead can be a bit unnerving at times and can make you seem like a bit of a novice in stop-go traffic. It’s better to let the creep function push you forward until you get used to the accelerator. The Figo AT is also offered with a hill-start-assist system to prevent the car from rolling back when driving off on an incline.

Drive in a more sedate fashion and you’ll find that the gearbox also loves to shift up the gears as quickly as possible in 'D', and this too adds to the feeling that the car is not accelerating as fast as the engine note suggests it is. Downshifts feel lazily done, trying to coax it to downshift with a stomp on the accelerator pedal provides responses that aren’t very prompt.

Overall the 1.5-litre engine and the 6-speed dual-clutch transmission are tuned for efficiency and durability. Ford offers an impressive one lakh kilometre or two-year warranty on the transmission! What this means is that the transmission shifts aren’t as quick as we have come expect from dual-clutch gearboxes. Also, when you mash the accelerator pedal the 1.5-litre motor suddenly roars to life, but the change in pace isn’t as dramatic or satisfying. All this is not to say that the Figo 1.5 petrol AT is slow. From a standing start, the Ford hits 100kmph in less than 10 seconds, 9.96 seconds to be precise.

Slotting the gearstick into 'S' only changes the upshift point of the transmission, with the transmission waiting till the revs rise to around 6200rpm before upshifting. While you do have the option of upshifting or downshifting using the buttons on the gear knob, this feels unnatural. The system also tries to stop you from downshifting too aggressively, which can be frustrating if you choose to don your pace mode.

How the tables have turned! The Ford Figo is not the driver’s delight as its predecessor used to be. While the complaint with the older car was that its brilliant chassis could do with a lot more power, this Figo AT now has the power but it just doesn’t feel as composed, connected or thrilling. The steering unit is now electrically-assisted instead of being hydraulically-assisted like the older car; every small adjustment is rewarded with the desired directional change, but the level of feedback is nowhere close to that of the older car.

The Figo was known for its handling capabilities, with the car encouraging you to take every corner harder than before. You can feel that Ford engineers have walked the road less travelled by opting to focus on comfort rather than outright handling. As a result, the Figo AT smoothes out most of the rough edges on the road but rolls noticeably while taking corners. But, a surprising sense of brittleness and harshness keeps it from being outright pleasing.  The flat seats at the front also prevent you from taking the corners too hard, holding onto the steering while taking a corner is neither fun nor safe. Why so much flak for the suspension on the Figo AT? We know that Ford can do better and has, look at how good the Figo S is! Thankfully, the softer suspension setup does not make this a bouncy car over bumpy roads.

The Ford Figo AT then is not the fast corner carver that you have been craving for, but it is close to being a great highway cruiser. The 6-speed transmission is also in its element at highway speeds, keeping the engine ticking along nicely at low RPMs for a relatively quiet experience.

The Figo gets dual airbags, ABS (Anti-lock Braking System) and EBD (Electronic Brake Distribution) to keep you safe. This AT version is offered with safety enhancing features such as ESP (Electronic Stability Program), TCS (Traction Control System, which can be turned off) and HLA (Hill Launch Assist).

At Rs 7.70 lakh, ex-showroom Delhi, the Ford Figo 1.5 petrol AT is the most expensive variant of the car available. With an in-city mileage of 12.14kmpl and highway mileage of 18.02kmpl, the Figo AT is going to be expensive to run unless driven sedately.

The takeaway is that the Figo automatic is a car that won’t thrill the traditional Ford enthusiast. For those looking for a convenient option, the Figo will require some adapting, especially in bumper-to-bumper traffic, which we feel is something not expected from a high-tech dual-clutch solution. The Figo then fits a narrow niche, apt for the extremely relaxed driver looking for an automatic car from Ford and who does not mind spending a bit more for it.