Volkswagen India Drives In The Taigun At Rs 10.49 Lakh 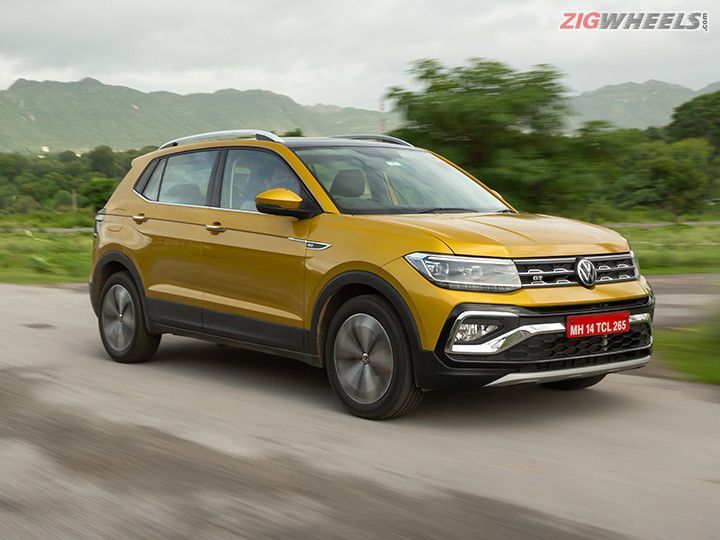 Volkswagen India has launched the Taigun compact SUV at Rs 10.49 lakh. Based on the same underpinnings as the Kushaq, the Taigun is VW’s answer to the Hyundai Creta and Kia Seltos. It’s offered in two broad trims: Dynamic Line (1-litre TSI) and GT (1.5-litre TSI). The latter is available in multiple variants to make the ‘GT’ badge more accessible.

Take a look at the variant-wise prices:

With plenty of straight lines and creases, the Taigun’s exterior design is out-and-out Volkswagen. The fascia features the carmaker’s twin-slat chrome grille flanked by a pair of LED headlamps. Thanks to India’s love for bling, there’s a thick chrome strip on the bumper.

Take a look at the side profile, and you find the silhouette is identical to the Kushaq, except for the different set of alloys. At the back, the highlight has to be the connected LED tail lamps, a spiffy little element that’s certain to get all the attention, especially at night.

The cabin has ‘Volkswagen’ written all over it. First up is the clean and straightforward dashboard design. The Taigun one-ups the Kushaq by offering an 8-inch digital driver’s display, however, the top-spec GT+ doesn’t get ventilated seats -- a feature reserved for the 1-litre TSI variants. Things like the 10.1-inch touchscreen infotainment, gear lever (on the AT variants), and touch-based climate control knobs are shared with the Kushaq.

The Taigun gets two turbo-petrol engine options: a 115PS 1-litre three-cylinder and a 150PS 1.5-litre four-cylinder. The latter packs the cylinder deactivation tech, which shuts down two cylinders under light load for optimum fuel economy. Both units get manual and automatic transmission options.

To know what we think of the Taigun, read our exclusive first drive review. VW’s compact SUV has racked up over 12,221 pre-launch bookings in the country. It goes up against the Kia Seltos, Hyundai Creta, Skoda Kushaq, Tata Harrier, and the upcoming MG Astor.