Will arrive in European markets by 2021 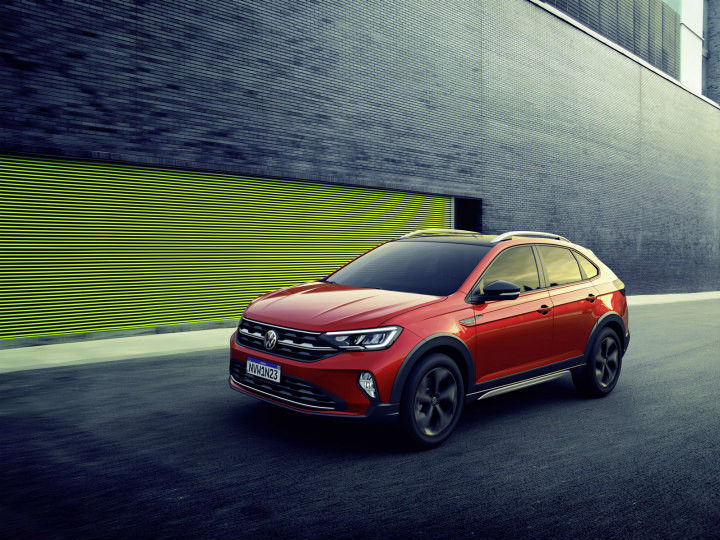 A little over a month ago, Volkswagen had teased two SUV coupes, namely the Nivus and Tayron X R-Line, for two different markets. And now, the carmaker has officially taken the wraps off the Nivus in Brazil. While this is a near production-spec model, it is built on the MQB A0 platform that also underpins the India-bound 2021 Taigun compact SUV from the Auto Expo 2020.

The Nivus is an SUV-coupe that measures 4266mm long, 1757mm wide, 1493mm tall, making it as long as the Taigun. However, the Nivus’ wheelbase is shorter by 90mm, at 2566mm.Design highlights include LED headlights with LED DRLs, LED fog lamps, 17-inch alloy wheels, and trendy LED tail lamps. Boot space rated at 415 litres.

On the inside, the Nivus is packed with a variety of equipment. Notable ones include a 10.25-inch fully digital instrument cluster that joins a 10-inch touchscreen that debuts VW Play infotainment system. Developed in Brazil, it gets features like Android Auto and Apple CarPlay connectivity, an app store and built-in WiFi. Other features include adaptive cruise control, front and rear parking sensors, as well as a multi-function steering wheel.

Under the hood, the Nivus is powered by a 1.0-litre 3-cylinder TSI petrol engine that develops 128PS of power and 200Nm of torque. Transmission duties are taken care of by a sole 6-speed automatic gearbox. This engine is also available in the Polo, T-Cross and Virtus in Brazil and was recently introduced in India with the BS6 Vento/Rapid and Polo range.

The Nivus is expected to go on sale in Brazil in a few weeks while European markets are set to receive the Nivus by 2021. While it is unlikely to make it to India, the Taigun is slated for a launch later this year or by early 2021. Expect it to be priced between Rs 10 lakh and Rs 15 lakh (ex-showroom India). Post launch, It will take on the likes of the Hyundai Creta, Kia Seltos and MG Hector.