Toyota's first badge-engineered car in India is almost here. Spied at a dealership in two colours, the Glanza is set to be launched next month 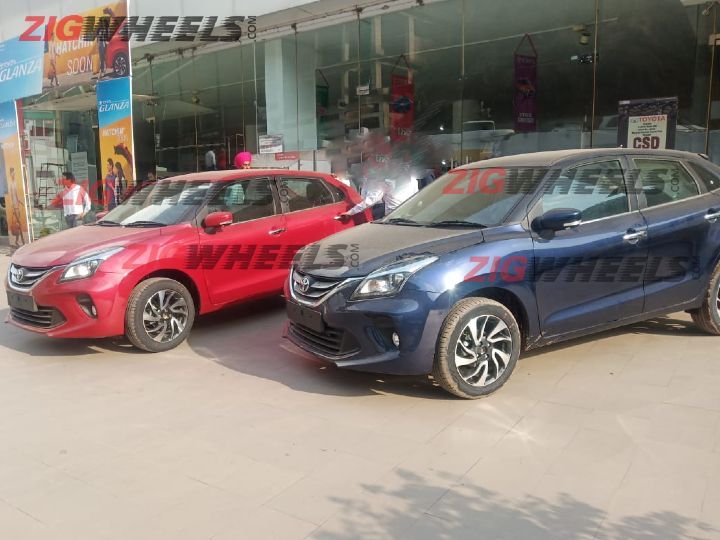 Toyota’s first rebadged Maruti, the Glanza has started reaching dealerships ahead of its unveil slated for later this month. Based on the Maruti Suzuki Baleno, the top-spec variant of the Glanza has been spied in a new shade of red at a dealership this time around.

The Glanza spied here is the top-end V variant. It gets minimal cosmetic updates compared to the Baleno. Changes are limited to a new twin slat chrome grille. The headlights, front bumper, side profile and the rear remain exactly the same as its Maruti cousin. Even the dual-tone alloys and the tail lamps are the same.

The interiors of the Glanza have not been spotted yet. But given the similarity shared in the exteriors, we don’t expect much to change on the inside too. One can expect a slightly redesigned steering wheel and a different colour scheme which might be the only differences in the cabin. Yes, the Glanza will be feature loaded like its Maruti cousin. So expect features like the infotainment system with Android Auto and Apple CarPlay, climate control, coloured MID screen and LED headlamps to be carried over to the Glanza.

While the Baleno has two BSVI petrol engine options in the form of the 1.2-litre K Series motor and the 1.2-litre DualJet motor, we expect the latter to make its way under the hood of the Toyota. The 1.2-litre DualJet motor churns out 90PS of power and 113Nm of torque and comes equipped with SHVS tech for better fuel efficiency. The ace up the Toyota’s sleeve though is the CVT automatic gearbox which will be mated to the DualJet motor. This will give the Glanza a significant advantage compared to its Maruti cousin as the Baleno Dualjet is available with a manual only. Apart from the CVT auto, the 5-speed MT will also be available for those who want a stick shift.

The Glanza is expected to be unveiled in the middle of May. With an expected launch next month, it is likely to be priced at a premium compared to the Baleno. Prices are expected to start from around Rs 7.20 lakh and go up to Rs 9.20 lakh. When the Glanza hits the roads, it will rival the Maruti Suzuki Baleno, Hyundai Elite i20, Honda Jazz and the upcoming Altroz.

For the uninitiated, the Glanza is a result of the MoU signed by Toyota and Suzuki in February 2017. The Glanza will be the first of the rebadged products that both the Japanese giants will exchange. After the Glanza, the Ciaz and the Vitara Brezza will be going through the same treatment next. Soon, Maruti will once again be present in the D-segment sedan space thanks to the rebadged Corolla Altis.