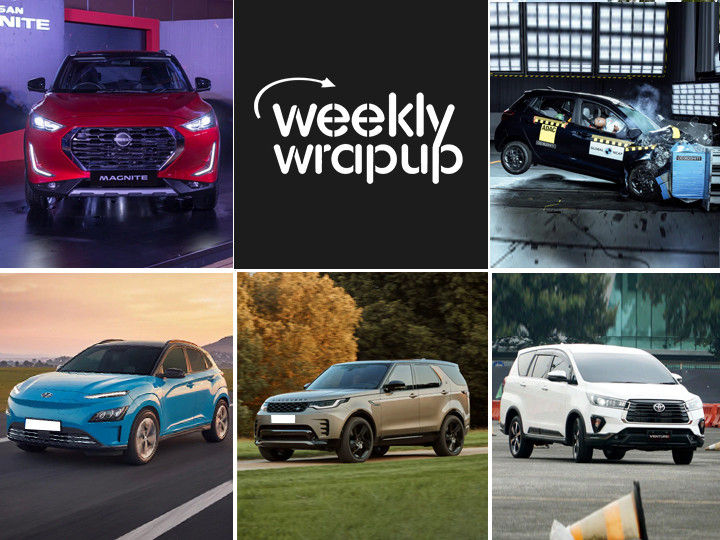 This has been an action-packed week. From facelift reveals to upcoming launch dates and failed crash tests, the past week has kept us entertained. Let’s dive into all that took place in the second week of November:

Will the Magnite be Nissan’s golden egg or will the Japanese carmaker’s fortunes continue to be worrying? We might just find out soon enough as our sources have revealed that Nissan's debut offering in the sub-4m SUV segment could be launched on November 26. Multiple dealers have already started accepting pre-launch bookings at a token amount of Rs 11,000. Read more about this here.

The facelifted Innova Crysta could just be looking at an early-December launch date. The MPV is already up for unofficial pre-launch bookings, with dealers hinting at a price hike of Rs 50,000 over the current model. Check out all the news on the facelifted version’s expected launch here.

Land Rover has revealed the facelifted Discovery which looks completely unchanged. A deeper dive into the specifics, however, will reveal updated features, new engines and new technology. To top it all, it will most likely arrive in India by early-2021. Get all the details here.

Several cars sold in India were crash-tested by Global NCAP as part of its #SaferCarsForIndia campaign. It will be sufficient to say that the results were somewhat disappointing, especially from cars that are somewhat fan favourites (hint: Hyundai Grand i10 Nios, Kia Seltos). Oh, and if you think that’s it, Maruti Suzuki’s result will surely surprise you.

Hyundai Kona Electric Gets An Update

Hyundai has revealed the facelifted Kona Electric after doing the same for its internal combustion engine counterpart. The EV is 40mm longer than its predecessor and gets significant updates to its design (closed grille) and its interiors (bigger instrument cluster). Check it out here.