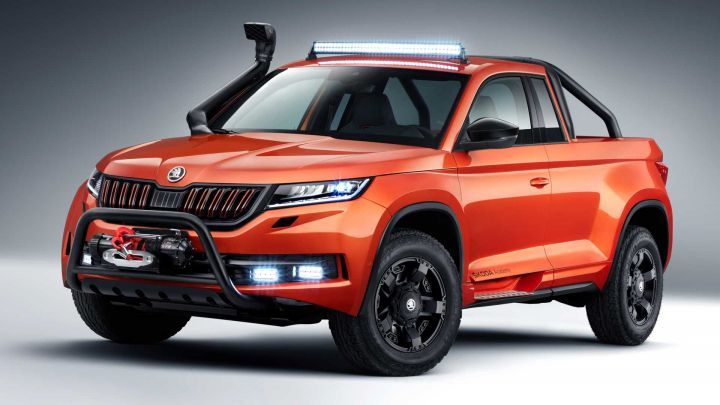 Czech carmaker Skoda has displayed a one-off pick-up truck based on its flagship SUV, the Kodiaq. Called the Mountainq, the pick-up was built by 35 students at Skoda’s vocational school in Mlada Boleslav over 2000 hours. Sadly, being a one-off project, you won’t be able to buy the Mountainq from your nearest Skoda showroom in the future. But it’s an interesting vehicle nonetheless.

The Mountainq gets major changes at the side and the rear to accommodate a pick-up bed. The front doors are also shorter compared to the Kodiaq and are more chunky in terms of design. Sitting on 17-inch, high profile, off-road spec tyres and complemented by squared-off wheel arches, the Mountainq has quite a muscular stance. The pick-up uses the same tail lamps as seen on the Kodiaq, while a chunky tailgate completes the muscular look. The front half of the Mountainq looks almost the same as the SUV. The fog lamps are now quad units housed lower in the bumper instead of just under the headlamps. It also gets off-road equipment like a bull bar, winch, snorkel and an LED light bar.

On the inside, the Mountainq gets the all-black dashboard from the Kodiaq RS SUV. While it gets plenty of faux carbon fibre elements, the Mountainq also gets orange inserts to differentiate it from the sporty SUV.

The Mountainq has also grown in size compared to the regular Kodiaq. Here’s how it compares to the standard SUV.

The Mountainq is powered by a 2.0-litre TSI petrol engine. Churning out 190PS of power, this engine might make its way to the Indian-spec Kodiaq soon. To know more about Skoda’s plan for the petrol Kodiaq, click here. Currently, the India-spec Kodiaq is available only with a 2.0-litre TDI diesel engine that produces 148PS of power.

The Mountainq is the sixth concept vehicle built by students at the Skoda Academy. Previously, students from the academy had also built an one-off pick-up called the Sunroq (based on the Karoq SUV). While it is sad that the Mountainq is an one-off project vehicle, it’d be interesting to see if Skoda incorporates lessons learnt from it in a future production-spec vehicle. This could spawn a whole new pick-up truck too, if there is enough demand. Fingers Crossed!