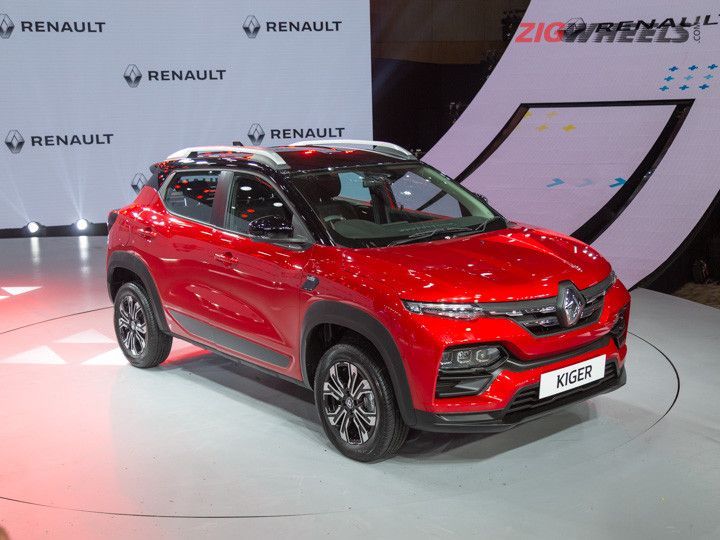 UPDATE: Renault India has launched the Kiger at Rs 5.45 lakh.

Renault India is all set to launch the Kiger on February 15. The Kiger will mark Renault’s entry into the hotly contested sub-4 metre SUV segment which comprises stalwarts such as the Maruti Suzuki Vitara Brezza, Tata Nexon, Kia Sonet, Nissan Magnite, and the Hyundai Venue among others. The Kiger won’t have it easy but Renault is looking to price it aggressively to draw more buyers. Here are five things you should know if you’ve had your eyes set on one:

The Kiger’s exterior design, which looks like a larger Kwid, is familiar. Renault, though, has spruced it up with multibeam LED headlamps with LED DRLs. The familiar Renault grille also looks bold and adds to the design. In profile, the sloping roofline looks more crossover rather than SUV. However, the body cladding and 16-inch alloy wheels add some muscle. The C-shaped tail lamps are a direct lift from the concept.

The Kiger’s basic dashboard layout is reminiscent of the Tata Nexon. A few parts such as the climate control knobs and infotainment system have been borrowed from the Magnite. While quality levels are satisfactory, they aren’t up to the benchmark set by the Hyundai Venue, Mahindra XUV300 or the Kia Sonet.

That said, the Kiger’s cabin scores high on practicality. It has decent space for five occupants with 29.1-litre of in-car storage.

First, let’s talk about what’s missing. The Kiger doesn’t come with cruise control and a sunroof. Even the wireless phone charger and PM 2.5 AC filter are offered as optional extras.

The Kiger will be offered with two petrol engines: 72PS/96Nm 1.0-litre naturally aspirated and 100PS/160Nm 1.0-litre turbo-petrol units. While a 5-speed manual gearbox is offered as standard, the automatic transmission differs depending on the powertrain. The naturally aspirated unit will be offered with a 5-speed AMT while the turbo-petrol engine will come with a CVT.

At an expected starting price of Rs 5 lakh (ex-showroom), the Kiger is likely to be the most affordable sub-4 metre SUV, undercutting all its rivals except the Nissan Magnite. The Kiger takes on the Kia Sonet, Nissan Magnite, Maruti Suzuki Vitara Brezza, Ford EcoSport, Tata Nexon, and the Hyundai Venue.