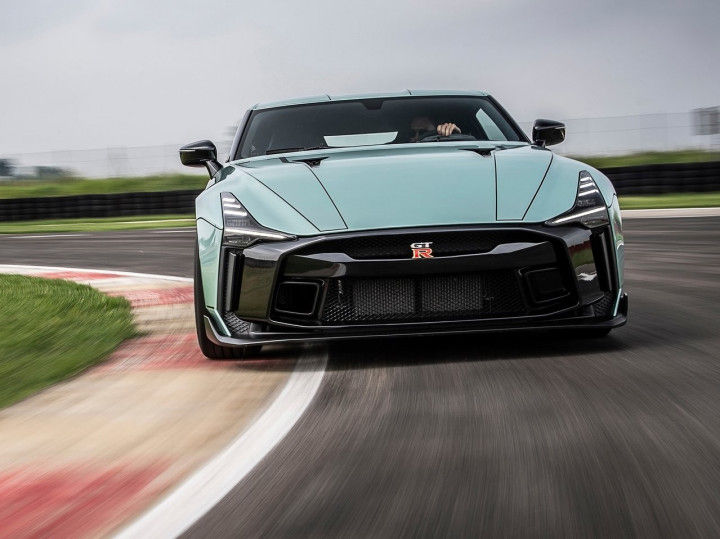 We first got a glimpse of the Nissan GTR 50 at the Goodwood Festival of Speed back in 2018. But that was a concept version and what we have here is the very first production version of the million dollar Nissan GTR 50. This hand-built, limited-production supercar is designed by Nissan but development and production is taken care of by Italdesign, an Italian design house.

Although it's a Nissan GT-R Nismo underneath, the whole design has been tweaked and looks sleeker than the standard GT-R.  The supercar gets a sharper design which is more muscular and futuristic. Basically, it looks like a reimagined version of the GTR from the future. That said, the design might not be to everyone’s taste. You can love it or hate it but you just can’t ignore the GTR 50. The cabin features the same layout but it now gets a heavy dose of carbon-fibre, alcantara, and black leather.

Although the styling is the biggest change, the GTR 50 is anything but a cosmetic job. Under the hood is the same tried-and-tested 3.8-litre V6 engine from NISMO. But thanks to some improvements to the internals and a bigger turbochargers from the GT3 race car, the output figures now stand at 720PS and 780Nm. Well, now you know why we’ve been referring to the GTR 50 as a supercar instead of a sports car. In contrast, these figures are a huge jump from standard GT-R’s 577PS and 637Nm. These figures put the GTR 50 along with big supercars such as the McLaren 720S.

The changes under the skin don't end there as Nissan has also thrown in an expensive set of adjustable coilovers from Bilstein. It also features six-piston front and four-piston rear Brembo brakes and Michelin Pilot Super Sport tyres. The dual-clutch sequential 6-speed gearbox has been reinforced along with  stronger differentials and drive shafts in place.

The GTR 50 exists to commemorate 50 years of the Godzilla. All of this and the exclusivity comes at a price. All 50 units will retail for USD 1.1 million ( around Rs 8 crore) and owners can also customize the car with historic liveries. But, most of them have already been accounted for.