This Is How You Celebrate 50 Years Of Nissan GT-R! 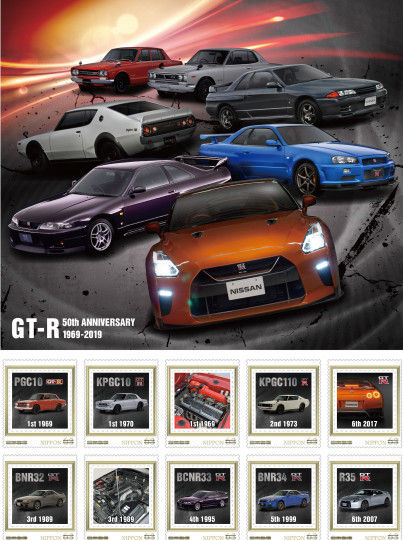 If you go by the numbers, the 50th anniversary of the Nissan GT-R actually took place last year. But that didn't stop Nissan and Japanese Postal Service from celebrating the occasion with a rather special set of stamps. Yes, the stamp set of all generations of GT-R itself is sensory overload but you’re absolutely wrong if you think that it is just the stamps. The Japanese, being the kings of cool, you also get a scale model of the Hakosuka and portraits of the legendary RB26 and the S20! Oh boy, what I would trade to have been born in some part of Japan!

To be more geeky, the exact contents inside the box that you see here are:

Now, all of this comes in a rather fancy box which depicts the journey of the Nissan GT-R. It all started in the 1970s with the KPGC10 Skyline 2000 GT-R Hakosuka with 2.0-litre inline-six S20 mill with a stratospheric 7000rpm (for that time) redline. Following the footsteps was the ultra rare Kenmeri KPGC110 in 1973. The GT-R badge was then put to rest for the years to follow until 1989 with the R32 GT-R which earned it the Godzilla nickname.

The R33 and R34 further cemented its cult status by obliterating the competition and giving nightmares to all the supercars out there. After a brief hiatus, Nissan came out with the R35 GT-R in 2007, which makes it exactly 13 years old today. It was light years ahead of its time that it is only lately that the competition could catch up and surpass the ‘zilla. Then again, the hardcore Nismo versions can still be found sticking on to the tail of some rather expensive and entrenched supercars.

Let’s say you are a GT-R fanatic and you want one of these stamp boxes. All it takes is a ticket to Japan. We hate to break it, but in order to grab one, you have to go to a post office in Kanagawa and Yamanashi prefecture (950 post offices) or other post offices across Japan. Provided you are a nutcase and you reach there, get ready to shell out ¥4,600 (approx Rs 3000). And act fast because it is limited to 5,000 units.

PS: Anyone up for this, please do get one box for me as well.