50 Years Of Godzilla: The Journey Of The Nissan GT-R 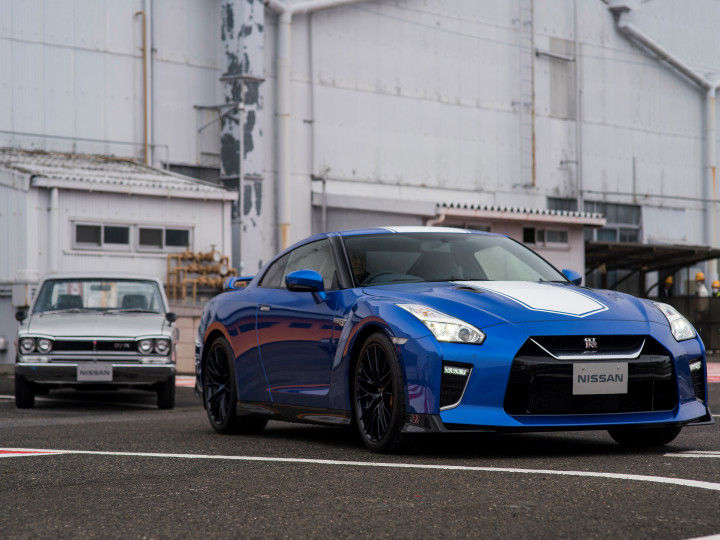 The Nissan GT-R is aptly nicknamed Godzilla. Like the Japanese mythical creature, the humble sports car from Nissan was enough to obliterate any supercar you point at it while also embarrassing a few hypercars. It’s been 50 years since the GT-R has been giving its peers nightmares. While Nissan is celebrating it with a spanking new R35 Nissan GT-R Anniversary Edition and a heartwarming video, we at Zigwheels decided to hitch a ride back to the past to see where it all started and how it evolved over time.

The Skyline started its life as a Prince sedan, which later went through many iterations. It was in 1969 that the three words first graced a Skyline version. Short for Gran Turismo Racer, this boxy-looking sedan got the first ever GT-R treatment with an S20 inline-six engine that produced 162PS at 7000 rpm and 176Nm at 5600 rpm. It was in 1971 that the KPGC10 coupe bodystyle debuted. Apart from using a high revving engine, the car also featured a 5-speed manual gearbox, racing bucket seats, triple Solex carburettors, and a limited-slip differential. With only 800+ cars sold, the Hakosuka is currently a collectible item with soaring prices.

The KPGC110 is arguably the rarest generation of GT-R. Why? Only 197 units were ever made due to the 70’s gasoline crisis. If you’re wondering, the Kenmeri name actually came from a popular advertisement of the car, which featured a couple called Ken and Mary. It carried over the S20 mill from its predecessor with the inclusion of disc brakes on all four corners. The biggest change, however, was the styling where the Skyline GT-R transformed from a three-box sedan/coupe to a fastback coupe. The KPGC110 was also the last car to use the GT-R name plaque until the R32 came out 16 years later.

In the meantime, Nissan came out with the C210, R30 and the R31 Skylines. Although there were some go-fast version likes the R30 2000RS and the R31 GTS-R, none got the revered three letters for 16 years.

The first car to feature the gem of an engine, RB26DETT, the R32 GT-R was much ahead of the game featuring ATTESSA all-wheel-drive system with HICAS 4-wheel steering. Restricted to 280PS due to Japanese Gentleman’s agreement, the RB26 engine was built for racing applications and output figures north of 500PS. It dominated the Japanese Touring Car Championship and went on to dominate the Australian Touring Car Championship as well. This is where the name ‘Godzilla’ was adopted, thanks to the Australian press who referred to it as the monster from Japan.

The same monster from Japan didn't stop there and came out in 1995 with a host of improvements to the formula. It gained around 100kg, but improved on all the areas where the R32 suffered with reliability issues. The car also got various versions such as the V-Spec, LM, N1 and the holy grail of all R33s and maybe even the Skylines - The 400R. Basically a Nismo version of the R33, it featured a bored-out 2.8-litre inline-six called RB-X GT2. Now, find an engine name cooler than that. Only 44 units of this 400PS unicorn were ever made and even finding pictures of one seems hard let alone the real deal.

The bruiser of the GT-R lot, the R34 was the most successful and popular version of the GT-R, thanks to its movie outings and blistering performance numbers. It was also a computer on wheels with all sorts of electronic wizardry. The 2.6-litre RB26 developed more than 330PS, although, like every other version, it was advertised to have only 270PS. The R34 was available in countless number of special versions like the V-Spec, V-Spec II, V-Spec II Nur, V-Spec II N1, M-Spec, and M-Spec Nur. Towards the end of the line in 2005, though, Nismo converted 19 units of the low mileage R34 V-Spec to Z-Tune. The engine was bored out to 2.8-litres and developed around 500PS with a top speed of over 327kmph. All the cars were stripped out, worked upon for more chassis rigidity, and re-built from the ground up. They were also finished in a special Z-Tune silver shade (except for two of them in the beautiful and drool-inducing Midnight Purple II shade).

2007 Tokyo Motor witnessed the resurrection of the GT-R badge although Skyline was omitted from it. No complaints there as the car took right off from where its predecessor left. It was a completely new base with a brand new front-midship platform and a 3.8-litre VR38DETT V6 engine. Although mocked as a computer on wheels by many, the GT-R is to this day revered as one of the best driver’s car that money can buy. The fact that this very car is in production even after 13 years is a testament to its mind-blowing abilities. The R35 was also ahead of its time, and came with enough tech to defy physics and make you question science. The car was basically a technological marvel on wheels, but it never stayed aloof from its special traits and bullet-proof reliability. Yes, it’s 13 years old now, but there still isn’t a car that can match the GT-R for its sheer levels of performance and affordability.