MG Gloster: A Closer Look At The Fortuner Rival In Detailed Images 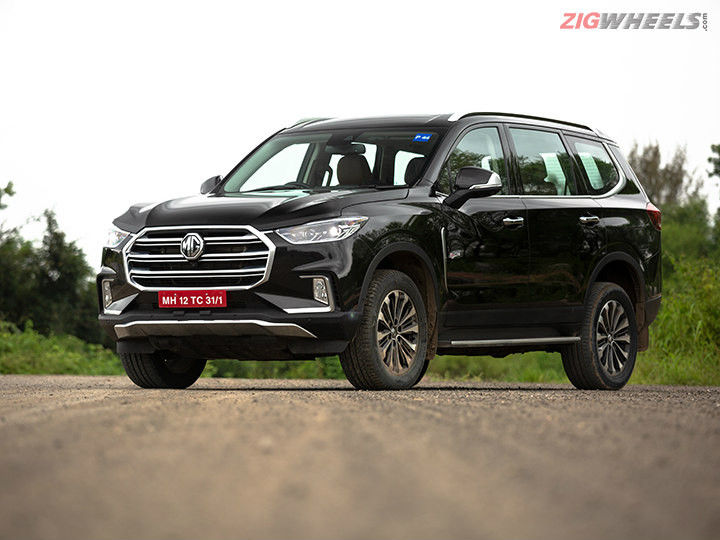 MG Motor India has launched its latest flagship SUV, the Gloster, at prices ranging from Rs 28.98 lakh to Rs 35.38 lakh (ex-showroom). It’s offered in four variants: Super, Smart, Sharp, and Savvy. It also takes inspiration from some of its rivals like a brick-like design for a strong presence. Here’s a closer look at MG’s new SUV in detailed images:

Up front you get LED headlamps, coupled with LED DRLs, front fog lamps and a large front grille that’s finished in Satin. We’re sure the Gloster looks dominating especially when viewed from your rear view mirror.

Dual-tone 19-inch alloy wheels fill the large wheel arches and round off the overall silhouette.

Towards the rear, you’re treated to LED tail lamps, rear fog lamps, as well as dual barrel chrome exhaust tips, which are there for show only  The most striking bit? A big Gloster badging above the bumper. Check

Heading inside, the Gloster’s cabin is inspired from BMW models. The landscape orientated 12.3-inch infotainment screen, aircon vents, gear shift lever and even the switches for the aircon are inspired from the Bavarian carmaker.

The Gloster’s four-spoke steering wheel looks fairly busy with a variety of controls for controlling the infotainment system, audio levels, calls and more.

The colour 8-inch digital driver’s display gives you all the necessary vehicle information like tyre pressures and the ADAS (Advanced Driver Assistance System) warnings and settings.

The Gloster is the perfect SUV if you’re being driven in as it comes with captain seats for the middle row occupants. Yes, there’s also a more practical 7-seater option, but that’s limited to the base-spec Super or Sharp variants.

Out back, there’s no compromise on space when it comes to the third-row. Six-footers should have enough headroom and knee room to sit fairly comfortably. You also get bits like seatback pockets, cupholders and one 12V socket and a USB socket.

There’s also some notable bits for the second and third row such as roof-mounted aircon vents and  tri-zone climate control, cup holders and phone storage pockets.

The Gloster is offered with two 2.0-litre diesel engine options.  The first one is a 163PS/375Nm single-turbo unit while the second one e is a twin-turbo 218PS/480Nm unit. Both engines are paired to an 8-speed automatic transmission.

But it’s the twin-turbo unit that features a full-time four-wheel drive system. The lower-spec unit drives its rear wheels only.

The Gloster’s rivals include the Ford Endeavour, Toyota Fortuner and Mahindra Alturas G4.