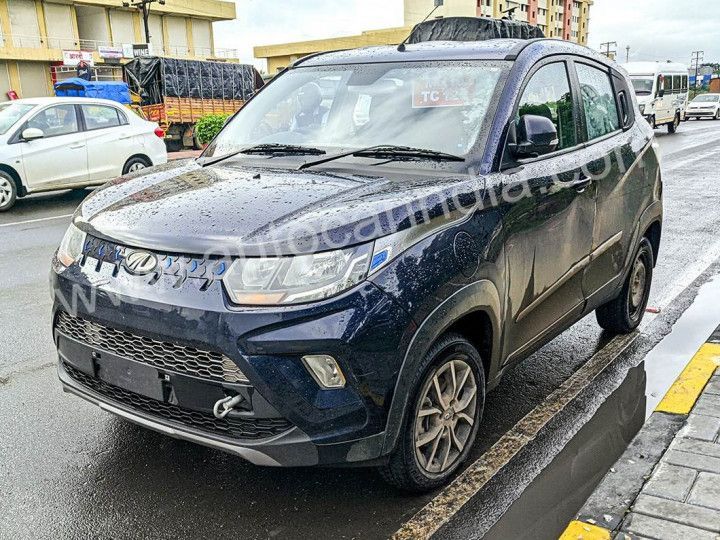 The eKUV100 has been spotted undisguised for the first time and it appears to be almost production-ready. The KUV100-based EV debuted at Auto Expo 2020, where it was launched for use in commercial fleets. The EV’s design sees a few changes over its ICE counterpart as well as a few updates over the concept showcased at the Expo.

Compared to the regular KUV100, the eKUV gets a closed front grille, as is the norm with EVs for aerodynamic purposes. It also gets blue inserts on design elements, such as arrow-shaped inserts on the grille, headlights, and tail lamps. There’s also a ‘+’ and ‘-’ sign on the number plate housing at the rear for those that still needed some help distinguishing between the two models.

As for the model showcased at the Expo, it had a different set of alloy wheels with blue inserts and ME (Mahindra Electric) badging on the charging port flaps. The model spotted here gets the same alloys as its ICE counterpart.

Running on Mahindra’s all-electric powertrain, the EV is claimed to offer a range of around 140km. The model showcased at the Expo used a 15.9kWh battery pack with the motor producing 54PS and 120Nm. It took just 50 minutes to charge from 0-80 percent.

We have word from the Indian carmaker that both the eKUV100 and eXUV300 will go on sale between 2021 and 2022. In the case of the eKUV100, the launch date is likely to be sometime before the end of this year. Mahindra could price the eKUV100, which will rival the upcoming WagonR-based EV, around Rs 10 lakh (ex-showroom).