Here is your first look at the India-bound SP Concept SUV without any camouflage. Spied at a commercial shoot outside India with the Seltos nameplate, it retains most design elements from the SP Concept 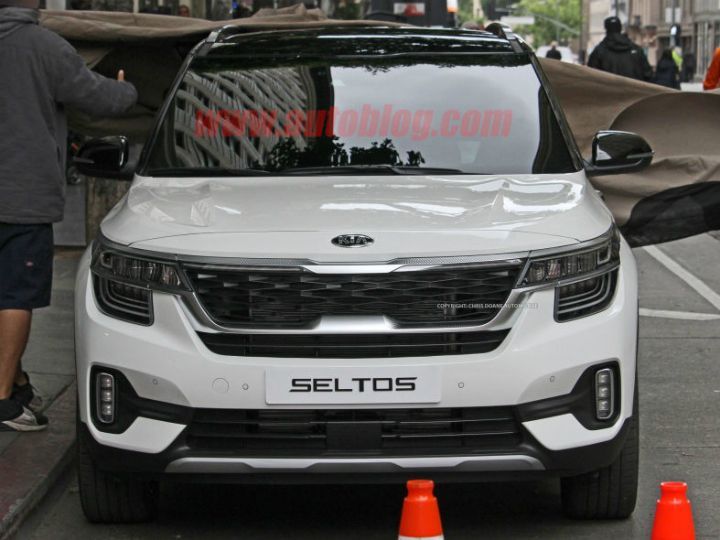 Kia is all set to kickstart its India innings soon with an all-new SUV codenamed the SP2i. While we have had a few glimpses of the compact SUV through official teasers and spy images, there has been a lot of curiosity surrounding it. Now though, the all new SUV has been spotted without camouflage for the first time and we like what we see!

Spotted outside India at what looks like an official photoshoot, the upcoming SUV was sporting a nice shade of white and a nameplate which reads “Seltos.” Yes, that is what the SP2i will be called in the international markets. It looks like the name Tusker or Trailster will be reserved for it only in India. The SUV seen in the images gets a contrasting black roof just like the original SP concept, and that is not where the similarities end. Kia has managed to keep the production version of the SUV as close to the concept as possible.

Up front, it features the trademark Kia Tiger nose grille with a sleek and futuristic looking headlamp setup, with LED DRLs which have a unique signature. Apart from these, the production version also gets the muscular looking front bumper, which also houses a skid plate to give it a more rugged appeal. Come to the sides and you can see a similar set of dual-tone machine-finished alloys as seen on the SP Signature Concept and the production model spotted testing in India.

You can also notice the rising window line here, which gives the SUV an edgy character. At the rear, it gets strikingly recognisable LED tail lamps which have been designed in conjunction with the urban appeal of the SUV. These are connected with a chrome band housing the “Kia” moniker sitting flush at the centre. Look closely and you can also spot the T-GDi and 4WD badges, which hint that the SUV will be offered with a turbo petrol motor and a four-wheel drive system in international markets.

Speaking of the powertrain options for India, the Kia SUV will be powered by 1.5-litre diesel and petrol motors here, along with the choice of both manual and automatic gearboxes. Kia has already said that these engines will be BS6-ready at launch and will be compliant once the new norms kick in the country.

Expected to be launched here by September this year, the all new Kia SUV will take on other compact SUVs such as the Hyundai Creta, Nissan Kicks and the Renault Duster facelift. From the looks of it, the Kia offering does seem to have got the design right. And with its premium urban SUV appeal it could shake up the segment, which at the moment is just a one-horse race. We expect the SUV to be priced in the Rs 10 lakh and Rs 16 lakh range (ex-showroom), which is a slight premium over its Hyundai cousin. But before that we will get a closer look at the compact SUV at its global unveil on June 20, so stay tuned.