We expect the brand to showcase a bobber and a scrambler, besides the production-spec version of the recently spotted test mule 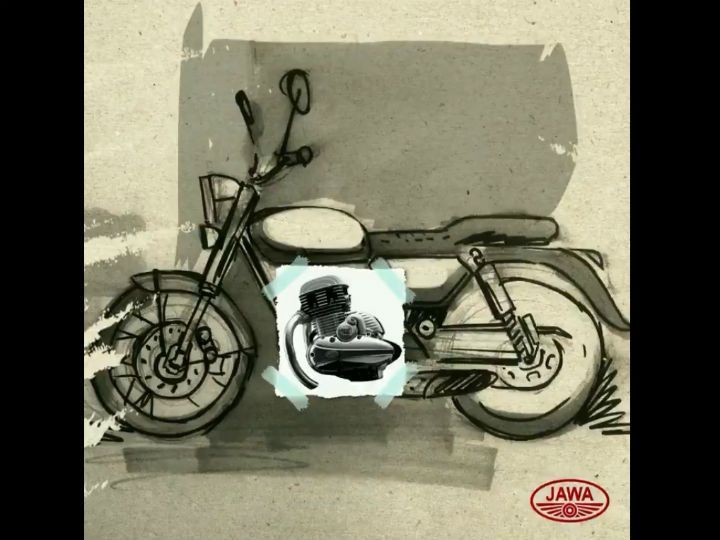 Jawa Motorcycles has been on a roll of late. Last month, after unveiling its new-gen engine, the brand announced that its first motorcycle will be revealed on 15 November. The motorcycle was recently spied testing too! And while we believed that the company will be unveiling just one motorcycle, it all changed when Jawa Motorcycles' released a video regarding a Q&A contest, answering one question a day from prospective buyers and fans alike. Amongst them, 10 lucky winners will be attending the unveil.

The video shows the new Jawa engine crudely placed on rough sketches of a classic-looking bike which is very similar to the test mule, along with a scrambler and a bobber as well. The first bike in the video looks like a precursor to the test mule, while the second bike looks quite identical to the test mule spotted recently. Besides it, we expect the brand to launch the scrambler and the bobber seen in the illustrations too.

Going by the image, the scrambler looks properly off-road friendly, thanks to the long-travel inverted front forks and rear monoshock setup. The exhaust is also high-set, thus enhancing its water-wading capabilities. You also get a large windshield and a bench seat with ergonomics that are seemingly upright.

The bobber, on the other hand, looks quite low-slung. The seat and monoshock combo bears an uncanny resemblance with the Triumph Bonneville Bobber. Even the rear fender looks similar! But we’re definitely not complaining as it looks absolutely sweet.

It does make business sense to make a modular platform to manufacture different types of motorcycles. Moreover, the mid-capacity segment is witnessing a major boom lately, with multiple brands fighting for market share. Making a 300cc scrambler and a bobber would also give customers a variety of choices, depending on their needs. Dial in Jawa’s history in India and the brand could have a marketing edge too, if done right.

In India, Jawa’s main rival is Royal Enfield. Going by Jawa’s output figures of 27PS/28Nm as opposed to Royal Enfield’s 20PS/28Nm, the bike should outperform Royal Enfield’s 346cc single, while offering an equally history-rich retro alternative with better performance to boot. However, we believe the bikes will be priced at a premium over their British counterpart.

Jawa Motorcycles will be sold through separate Jawa dealerships, under the brand name “Classic Legends”, which is a subsidiary of Mahindra and Mahindra Ltd. What remains to be seen, however, is how they price the motorcycles and what their expansion plans in India would be like.