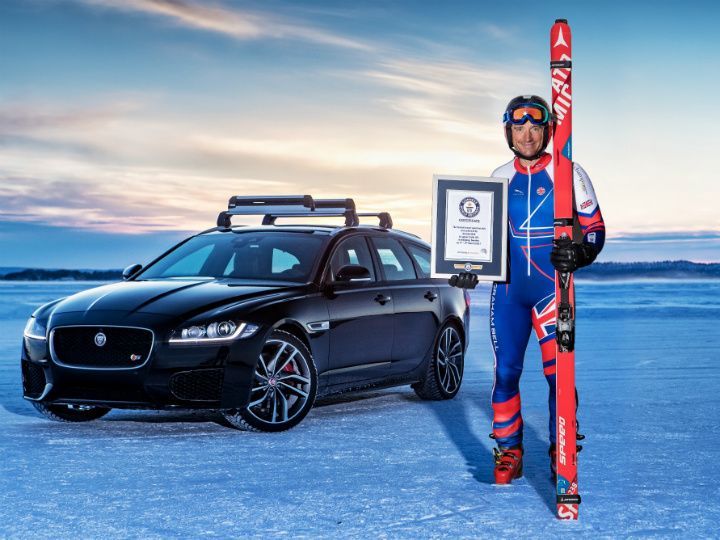 Jaguar’s marketing team seems to have a wager going on in the department on who can come up with wackiest of ideas to promote their new vehicles. It was only recently that the company flew high-speed drones through the backseat of the XJ lineup. Now, the team and engineers at JLR seem to have shifted their focus on the XF Sportbrake by towing a skier at 189kmph to enter the Guinness Book Of World Records!

This historic feat was achieved by former British Olympic skier Graham Bell. The 51-year old broke the previous record of 112kmph by a margin of 77kmph. The record was completed at Jaguar Land Rover’s Arctic Revi Test Centre in Sweden. Despite the (d)icy conditions and a chilling temperature of -28 degree Celsius, it only took Graham a couple of practice attempts to break the record for good.

Speaking on the historic occasion, Graham Bell said, “I’m really proud to have achieved this Guinness World Record title, but it was a real team effort with the engineers at Jaguar supporting me every step of the way. The XF Sportbrake stayed perfectly composed throughout and gave me the confidence to not only beat the target but smash it by a great margin!”

Under the bonnet of the XF Sportbrake sits a 3.0-litre, supercharged V6 engine that produces a mammoth 380PS of power. The estate can hit 100kmph from a standstill in a mere 5.3 seconds! According to  the company, the car’s Adaptive Surface Response (AdSR) and All Surface Progress Control systems help in achieving good grip even in unsavoury conditions.

As for Graham, it is safe to say that he will never have a problem breaking the ice again.