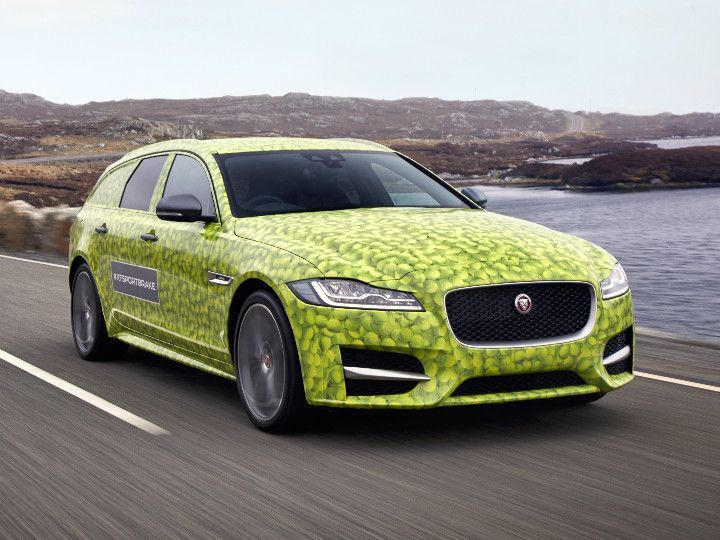 Jaguar has officially revealed the upcoming XF Sportbrake for the first time. Draped in a tennis-ball ridden camouflage, the XF Sportbrake is on a journey to the All England Lawn Tennis Club which hosts the annual Wimbledon tournament. The car will be unveiled on June 14, 2017, by current world number one tennis player and defending Wimbledon champion, Andy Murray.

The Jaguar XF Sportbrake will be 'the most dynamic premium estate car in the world', claims the company, and that it will be 'combining traditional Jaguar design and agility with a spacious and practical interior'. The XF sedan has been appreciated for its beautiful design and the Sportbrake, designed under the leadership of Ian Callum, is expected to be no different. Jaguar has revealed some images of the car, but there are no shots of the rear for now.

Apart from the estate design, the XF Sportbrake is not expected to look too different from the sedan; The front fascia looks no different than the sedan in the preview photos - though this could change once the camouflage comes off. The window line swoops aggressively as it moves to the rear, while the roof stretches on straight for longer to free up more luggage space. The design looks more 'dynamic' than the pre-facelift XF Sportbrake. As stated earlier, we have no idea how the rear of the Sportbrake will look like, but it is expected to have a version of Jaguar's signature taillight design inspired by the F-Type.

Jaguar has not confirmed any powertrain options for the XF Sportbrake as of now, but we expect them to be no different from the ones on the sedan. In India, the XF sedan is powered by either a 2.0-litre, 4-cylinder turbocharged diesel developing 172PS/430Nm or a 2.0-litre, 4-cylinder turbocharged petrol developing 241PS/340Nm. Both the engines are paired to an 8-speed automatic transmission with power sent to the rear wheels. The pre-facelift XF Sportbrake used to share all its powertrains with the sedan, and that is expected to continue with the new estate too.

In international markets, the variants of the XF Sportbrake with an AWD system will be more popular. It is not known if Jaguar will bring the new XF Sportbrake to India, the previous generation of the car was never offered here. Of its traditional rivals including the BMW 5-Series Touring, Mercedes-Benz E-Class Estate, Audi A6 Avant and the Volvo V90, only the Audi is available in India but in the ultra-powerful RS6 Performance avatar. Volvo is planning to launch the V90 in India, in the Cross Country guise, later this year - which may be some incentive for Jaguar to offer the new XF Sportbrake too. Jaguar may, in all probability, use the services of its SVO (Special Vehicles Operations) division to create a powerful XF Sportbrake SVR version - which could be a good alternative to the Audi RS6 Avant Performance. If you are reading this Jaguar, may we please have that in India?