Would You Rather: Buy A New Triumph Street Triple RS Or A Used Jaguar XF?

Both British models come with fun performance bits and tech. Question is, which Brit to go for? 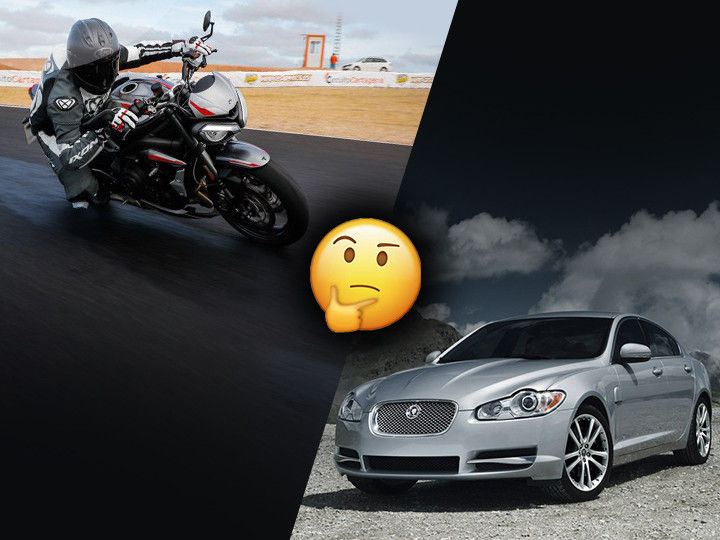 In our previous episode of ‘Would You Rather’ series, we pitched a new Honda Africa Twin CRF1100L DCT against a used Audi Q5 SUV-- two vehicles with rugged looks and the hardware to take you off road.

In this week’s edition we focus on two vehicles of British heritage that boast a mix of performance and creature comforts. We’ve decided to put a brand new Triumph Street Triple RS against a used 2010 Jaguar XF. Both cost roughly around Rs 12 lakh. Question is, which one of the Brits would you put your money on?

Starting with the Triumph Street Triple RS, under its fuel tank resides a 765cc, liquid-cooled, in-line 3-cylinder petrol mill that pushes 123PS of power at 11,750rpm and 79Nm of torque at 9,350rpm. The motor is paired with a 6-speed transmission aided by a bi-directional quickshifter as standard. All this gives it a 0-100kmph sprint time of 3.6 seconds (that’s only a couple of tenths shy of the Ferrari 458 Italia!).

On the other side of the garage, the Jaguar XF is powered by a massive 5.0-litre V8 petrol engine. Essentially the same engine as the supercharged XF-R. This motor is known to have serious mod potential. In stock form, it makes 380PS of power and 515Nm of torque, and comes paired to a 6-speed automatic transmission. All this gives the sedan a 0-100kmph sprint time of 5.7 seconds, which is not bad for a ‘family car’ that’s nearly a decade old! Stage one modifications on the XF push it comfortably beyond 400 horsepower! Not to mention, a straight-pipe exhaust on a V8 is nothing short of a concert. So, while it might be slower than the Triumph off the line, it’s definitely going to score more brownie points for drama.

The Triple RS is equipped with quite the tools to throw it around a racetrack. It gets some solid stopping power courtesy of Brembo M50s, and it gets proper suspension hardware courtesy fully-adjustable Showa USD fork paired with Ohlins monoshock. To harness the brilliant dynamics of the frame, the RS runs on super-sticky Pirelli Supercorsa SP v3s which means you can head to the track straight from the showroom. In addition to this, you get to play with five rider modes that allow you to customise throttle response, traction control and ABS.

In comparison, the main talking point for the Jaguar XF is the presence of Adaptive Dynamic suspension. This system analyses acceleration, cornering, throttle and brake pedal activity, as well as kick-down activation from the automatic transmission to adapt from one set of road conditions to another. Essentially giving you optimal response in any condition. Something akin to the active suspension setup from the Williams FW14B Formula One car. Sure, the race track is not home for a luxo-barge like the XF, but it’s definitely going to make the drive there (and back) a whole lot comfier.

The Triple RS with a seat height of 825mm remains a user-friendly bike even for shorter riders. Even the pillion seat has been redesigned for more comfort. Other notable features include a 5-inch TFT display with four colour options, Bluetooth connectivity and GoPro settings on the move via a joystick. The riding position isn’t super committed which means you can commute, munch miles and slay superbikes on the track in absolute comfort.

As is the case with Jaguars of today, the XF features automatic climate control, front and rear heated seats, a sunroof, a 7-inch infotainment system with USB, AUX/IN, as well as Bluetooth and navigation features.  It also doesn't compromise on safety with four airbags , ABS, traction control, and brake assist. But the nifty GoPro Bluetooth control on the Triple RS gives the two-wheeler an edge.

The highlight of the Triple RS is surely the bug-eyed LED headlamps, coupled with an aggressive naked bike look. While the new LED DRLs give it a modern look, it doesn’t really make the bug-eyed front end any prettier. It’s a love it or hate it kind of an affair, but the styling doesn’t matter when you’re sitting behind the bars and enjoying the triple-cylinder symphony.

On the other hand, the Jaguar XF’s sedan design would still continue to turn heads after a decade. Some notable bits include an oval mesh grille that is a throwback to the original XJ of 1968, 18-inch alloy wheels, and a coupe-like roofline.

At the end of the day, both vehicles score points for their x-factor as well as creature comforts. This makes it a rather difficult choice, but if you can ignore the bug eyes for the modern performance bits, the Triumph Triple RS is the one to pick. On the other hand, if you're looking for a car that not only has the potential to be fun to drive around a racetrack but also features some premium creature comforts, the Jaguar XF is the one for you. Although you should note that maintaining the Jag is going to be an expensive affair if anything goes kaput, while the Triple RS comes with the reassurance of warranty.

What Would I Pick?

I’m a car guy. While two-wheelers are cool, I’ve never really had that the confidence to push them to the limit as compared to four-wheelers. when it comes to pushing them to the limit. So, for the same kind of money, I’d rather get the Jaguar XF home with athat roaring V8. I’d feel a little safer pushing it around a racetrack with the safety kit on offer. Not to mention the bragging rights of having a V8 under the hood!