Hyundai Grand i10 Nios : The New Hatchback In Detailed Images

The third-gen Grand i10 Nios is bigger and and more premium compared to the older model. Let’s take a detailed look at it in pictures 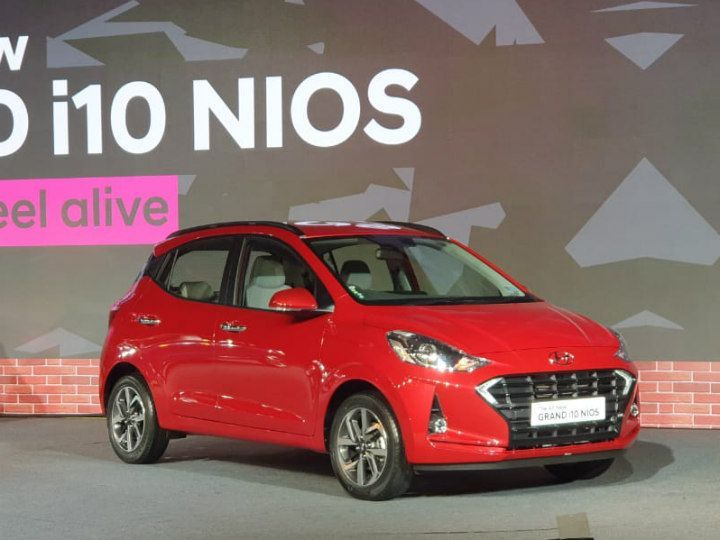 Hyundai has finally launched the much-awaited next generation version of its compact hatchback in India. Called the Grand i10 Nios, the new model will be sold alongside the Grand i10. It is offered in four variants - Era, Magna, Sportz and Asta - and here’s a closer look at it.

On the outside, it is clear that the Grand i10 Nios gets a host of cosmetic changes. Starting from the front, the changes include a new set of projector headlamps, a revised front bumper as well as a more aggressive bonnet.

The Nios sports a larger cascading grille which follows Hyundai’s ‘Sensual Sportiness’ design language. The Nios also receives a set of boomerang-shaped DRLs on either side of the grille, which gives it a sporty look. Also, it is the only car in the segment to sport projector fog lamps. As for the projector headlamps, they use halogen units instead of the LED ones seen on its rival, the Maruti Suzuki Swift.

Going towards the side, the Grand i10 Nios retains its tall-boy stance. However, the new hatchback is longer by 40mm, wider by 20mm and has had its wheelbase extended by 25mm. The Nios adds to its funky look with chrome inserts on the door handles.

The Grand i10 Nios has certainly seen a step up from Hyundai in wheel design. It now features a swanky set of 15-inch diamond-cut alloy wheels.

Going towards the rear of the Nios, it has undergone a revision along with a new set of tail lamps as well as a shark-fin antenna.

A closer look at the rear reveals that the chrome inserts that were present on the door handles are also present at the bottom of the bootlid.

With the Grand i10 Nios being wider and longer than the current Grand i10, its boot space capacity has increased to 260 litres compared to the older model’s 256 litres.

Inside, the Nios packs a variety of creature comforts that include a height adjustable driver seat, tilt steering along with a USB charger and a wireless phone charger. The interior also gets inserts at various places like the AC vents finished in either Aqua Teal or red.

One of the main highlights of the hatchback is the presence of a 8-inch infotainment system with Apple CarPlay and Android Auto. Unfortunately, it misses out on Hyundai’s BlueLink connected car tech that made its debut in the Venue.

Another interesting tidbit in the Nios is that it features a 5.0-inch multi-info display that provides information like live speed, fuel consumption, trip meter, average fuel consumption, service reminder, and average vehicle speed. Other highlights include a premium sound system from Arkamys.

Hyundai has made sure that the Grand i10 Nios keeps its occupants as cool as possible with features such as automatic climate control, rear AC vents and Eco Coating Technology which works as an air purifier.

Under the bonnet, the Nios retains the same 1.2-litre petrol motor and the 1.2-litre CRDi diesel from the Grand i10. However, the petrol motor is now BS6 compliant and delivers 83PS of power and 114Nm of torque. It is offered in a total of seven variants. The diesel motor, on the other hand, produces 75PS of power and 190Nm of torque and is available in three variants.

The Grand i10 Nios is priced from Rs 4.99 lakh to Rs 7.99 lakh (ex-showroom Delhi) which makes it slightly more expensive than the Grand i10 (Rs 4.97 lakh - 7.62 lakh, ex-showroom Delhi). The new hatchback will take on the likes of the Maruti Suzuki Swift and the Ford Figo in the Indian market.