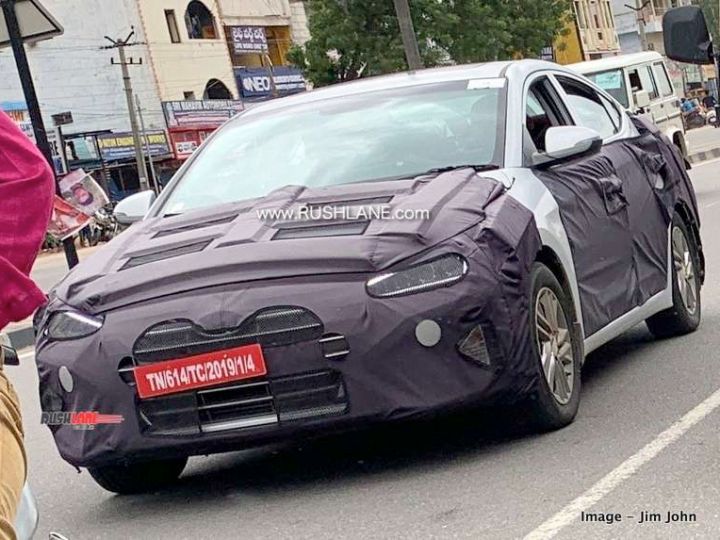 After launching India’s first connected-SUV, the Venue, and India’s first long-range EV, the Kona Electric, Hyundai is now hard at work with the Elantra. The facelifted model has been spied and this is the first update for the sedan since its Indian launch in 2016. It must be mentioned that the facelifted model is already on sale in international markets.

Though the sedan was under wraps, we could make out that it gets a bigger single-piece air dam. It is flanked by sleek triangle-shaped LED headlamps that are likely to be all-LED units. It is also expected to come with redesigned bumpers to complement its aggressive front. Apart from a set of new alloy wheels, the side profile looks almost the same.

Major changes are at the back, where it will get a new set of LED tail lamps. The number plate housing has been shifted from the boot lid to the bumper. Expect Hyundai to retain plenty of styling cues from the international-spec model.

While the interiors of the Indian-spec model haven’t been spied, based on the international-spec model, you can expect an almost identical design albeit with new elements. This includes a revamped instrument cluster that’s likely to feature a coloured MID, spruced up AC vents and controls, and a steering wheel that’s a direct lift from the recently launched Kona EV.

The Elantra facelift is also expected to be loaded with features like a touchscreen infotainment system with Android Auto and Apple CarPlay, dual-zone climate control, ventilated and powered front seats, electric sunroof, wireless charging, push button start/stop, hands-free smart boot, cruise control and more. It is also expected to get the Blue Link connected-car tech from the Venue.

The sedan is also expected to boast safety features like six airbags, ABS with EBD, ESC and hill start assist.

Under the hood, the Elantra facelift is expected to come with the BS6-compliant 1.5-litre diesel unit from the Kia Seltos. It produces 115PS and 250Nm, which does fall short compared to its current 1.6-litre iteration that produces 128PS and 260Nm -- so Hyundai might retune the engine to make more power. On the other hand, the petrol Elantra is likely to chug on with the 2.0-litre unit, albeit upgraded to meet BS6-emission norms. It puts out 152PS and 192Nm. Both the engine options are expected to come mated with a 6-speed MT and 6-speed torque converter AT transmissions.

The Elantra facelift is expected to launch by the fag end of this year and prices are expected to remain unchanged. Prices of the current-gen sedan start from Rs 13.82 lakh and go up to Rs 20.04 lakh (ex-showroom Delhi).

The Elantra currently falls behind the competition from the Skoda Octavia and Honda Civic. Will the facelift prove to be a much needed shot in the arm for the sedan? We certainly hope so.