This Honda Scooter Has MotoGP Dreams 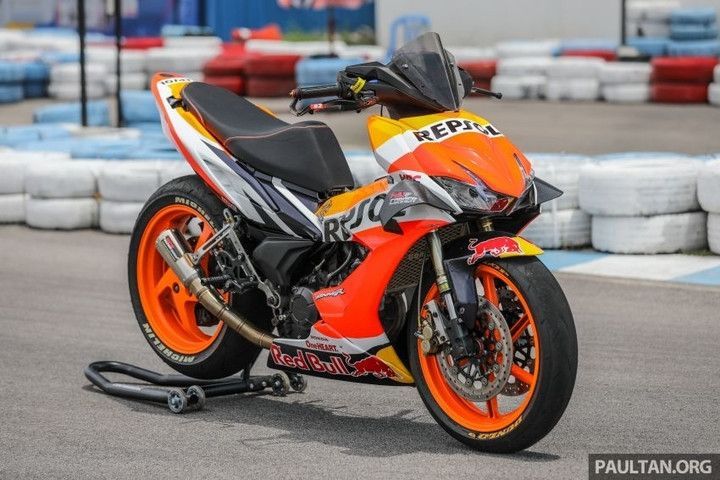 If there’s one scooter that could be a worthy grocery-getterfor Marc Marquez, this is it. After all, this Honda RS150R customised by Malaysian GTB or ‘Big Wheel Gang’ dared to ape the Spaniard’s championship-winning weapon. But if you thought this is just a regular scooter playing dress-up, you are thoroughly mistaken.

GTB is known to pull off crazy builds using mundane commuters and with this build, they have left no stone unturned to make the V4-powered MotoGP machine proud. The most obvious change is the wheel setup. Replacing the skinny tyres on the stock scooter are fancy, superbike-spec beefy rubber, complete with a single-sided swingarm borrowed from a Honda VFR800.

Complementing the tyres are the Brembo brakes as well as the suspension setup from Ohlins. GTB has even gone out to redo the seat and an aftermarket exhaust. Lastly, and the most important bit is the additional aerodynamic aid that comes in the form of wings attached to the sides, much like the original track scorcher.

The engine and the frame remain untouched. So, underneath all the fancy clothing, it still has the liquid-cooled 149cc motor developing 15.6Ps at 9,000rpm and 13.6Nm at 6,500rpm. But that didn’t deter the creators from taking it to a track and exploring the beauty of what they had created.

Though GTB hasn’t mentioned the cost of the build, Rudy Norman of GTB says a build like this can set you back by anything between RM10,000 (Rs 1.78 lakh) to RM50,000 (Rs 8.89 lakh). Though this is likely to remain a one-off build, we can’t help but think what a badass paddock scooter this Honda RS1250R could be.