Hero electric had launched its Optima and Photon scooters back in 2014 to provide a zero emission solution to urban mobility. Today they have unveiled their lithium ion versions 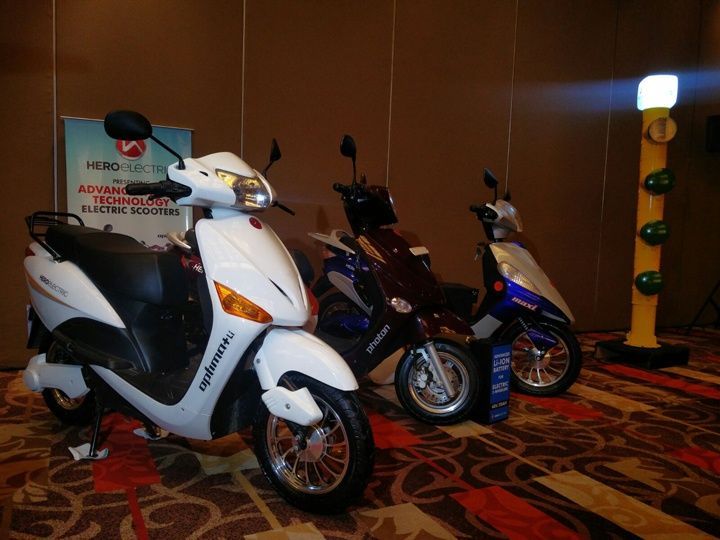 Hero Electric today unveiled its new high-speed electric scooter with Lithium-ion batteries compared to the AGM VRLA batteries which did duty on the older bikes. The Photon Li is the high-speed scooter and boasts of a top speed of 45kmph and promises to run for 60km on a single charge. Hero claims that the motor and battery packs have been specifically developed for the Indian weather and road conditions. In addition, the motor boasts of a peak power of 1500W, a multi stage heavy duty charger that regulates the charge depending on the battery condition and an electronic controller for optimum torque delivery. It also boasts of telescopic suspension up front and a disc brake mounted on 10-inch rims. Other features include an anti-theft alarm and dual mode of power and economy.

The Optima+ on the other hand is the low speed scooter and has a speed of 25kmph only. The battery pack at 20AH is half the size of the one on the photon which sports a 40AH battery. Though Hero claims its battery is good for 1500 cycles. The suspension are trailing link and comes with drum brakes only. The range stands at 65km on a full charge whereas the peak motor output is 250W.  The company is offering a 3 year warranty on the batteries and a life of 5 years. Both scooters will be launched on the 1st April 2016

Hero Electric has also introduced a first of its kind Electric Tipper waste management vehicle. The Tipper is priced at Rs 1.45 ;lakh ex-showroom Delhi without the battery, while the Electric Tipper with the battery carries a sticker price of Rs 1.75 lakh ex-showroom Delhi. It promises a range of 80km on a full charge and a top speed of 25kmph. It also comes with a 100AH lithium ion battery which requires 12 hours for a full charge. The Tipper also boasts of a pay load capability of 300kg and a peak power figure of 2000W.

Hero Electric has also launched its charging stations to improve the electric vehicle charging infrastructure in India and is in talks with various agencies and state governments to get them installed in various locations.