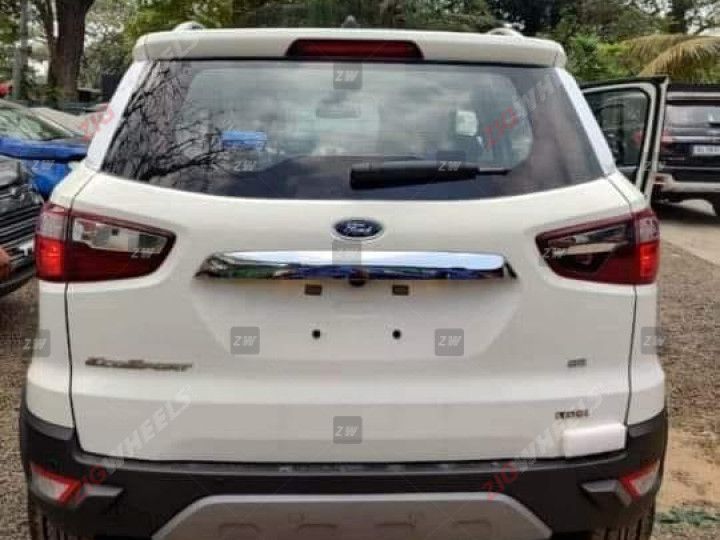 A Ford EcoSport without the tailgate-mounted spare tyre has been spotted at a dealership, raising speculation that it could soon launch in India. Ford manufactures the EcoSport with the tail-mounted spare tyre for select markets, including India. But the latest shots suggest that Ford may just be ready to finally ditch its distinctive styling element here.

Our dealership sources hinted that Ford is preparing two updates -- possibly two new variants -- that could be launched on March 10. A closer look at the tailgate reveals the new SE variant badging, similar to the one used in the international model. The tail-mounted tyre having done away with, there are two changes now:

That aside, the rest of it remains the same. If Ford decides to remove the spare, that would mean the EcoSport losing one of its unique traits. Also, this could be one of the last updates for the SUV before its successor arrives.

The EcoSport seen in this picture is the diesel variant with a 100PS 1.5-litre TDCI motor. We also expect the 122PS 1.5-litre petrol motor to power this model. Both the engines come with a standard 5-speed manual transmission, while the petrol engine can be paired to an optional 6-speed torque converter.

The updated EcoSport could be launched in India on March 10. Chances are it would be priced much like the current model, that is between Rs 7.99 lakh and Rs 11.49 lakh. It will rival the Nissan Magnite, Renault Kiger, Kia Sonet, Hyundai Venue, Tata Nexon, and the Maruti Suzuki Vitara Brezza.