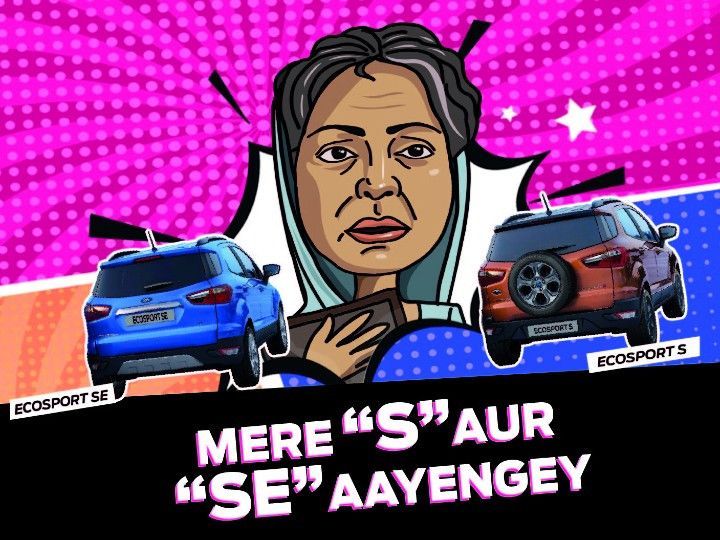 It looks like the Ford EcoSport SE variant may make its way to India soon, as the carmaker has dropped a teaser image of it alongside the S variant. In addition to this, more details have emerged about what to expect from the EcoSport SE.

The teaser image confirms that one of EcoSport's most distinctive traits, the tail-mounted spare wheel will be axed for this new variant. In place of that, there’ll be a number plate, with chrome slat above it and a faux rear skid plate. Aside from this, the SE variant looks pretty similar to the ‘S’. It is important to note that regular variants will continue to offer the tail-mounted spare wheel.

A fresh set of spy shots reveal a dual-tone black and beige upholstery. The ‘SE’ also looks fairly loaded with steering mounted controls, electric sunroof, as well as what looks like an 8-inch touchscreen infotainment system running SYNC 3 like the range topping S variant. Further details have emerged that the ‘SE’ is likely to offer a puncture repair kit as the spare wheel is missing, among other subtle additions.

Under the hood, it will most likely retain the 1.5-litre petrol and diesel engines from the standard model. The former produces 122PS of power, with the latter delivering 100PS. Both engines are paired to a 5-speed manual gearbox as standard, with the petrol mill getting the option of a 6-speed torque converter automatic.

As for where the SE variant may be placed in the EcoSport’s lineup, it may be between the Titanium and S trims. It will continue to rival the Renault Kiger, Nissan Magnite, Kia Sonet, Hyundai Venue, Mahindra XUV300, Tata Nexon, and the Maruti Vitara Brezza.