Batman And His Wheels Of Justice

With great money comes great toys. In his 80 years of crime-busting, the Caped Crusader has had an array of vehicles crafted by the legendary Lucius Fox to aid him in his nocturnal pursuits. We take a look at the best of them 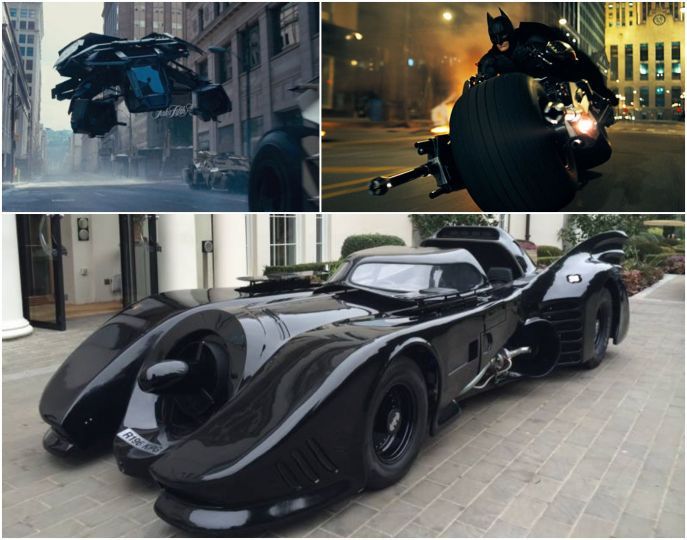 Special powers and superhuman strength are not what makes a superhero. No one knows that better than fictional billionaire Bruce Wayne, for his alter ego - Batman - is easily one of the most celebrated superhero figures in the universe. Yes, he’s rich and has got the resources to put villains in their place. But what gives the caped crusader who only operates in the shadows his acclaimed status is his unflinching determination to curb evil and make the world a better place. Maybe that's why Batman has such a humongous cult following despite the fact that there is no dearth of superheroes in this day and age.

Batman is one picky guy when it comes to his mode of transportation. Be it a car, a motorbike, or even an aircraft. Stealth is his second name and the same can be seen in the way he moves around. So considering that its Batman’s 80th anniversary, we at the Zigwheels HQ thought we’d geek out on the various types of vehicles that he’s used in the past.

Obviously, we’ll begin with Batmobile, right? It’s not only the most popular Bat vehicle but also one of the most recognisable superhero vehicles. The fictional car first featured in comics dating back to 1939 where it was a sober looking red car. Red? Not exactly the go-to shade for stealth operations. Batman’s Gotham runabout evolved over the years but the essentials remained the same -- it was black, stealthy, carried enough firepower and was way ahead of its time.

Of the numerous batmobiles that featured in comics and movies over the last 80 years, the ones that stand out are Adam West’s Lincoln Futura, Christian Bale’s Tumbler and Micheal Keaton’s Batmobile.

The Tumbler is a bonkers tank for the road which can obliterate anything in its path. Oh, and if Batman is in the mood for some ‘two wheels move the soul’, a part of the Tumbler can transform itself into a Batpod!

Meanwhile, Micheal Keaton’s Batmobile was the sleekest batmobile ever made. The massive wings, jet-turbine engine and the mad body work was so radical that even today, it is considered the best Batmobile ever. Various Batmobiles have been customised and used over time and it remains as our hero’s first choice to fight the baddies.

The Batcycle/ Batblade/ Batpod, whatever floats your boat, is the fictional motorcycle that featured in various Batman movies and comic book universe. The Batcycle debuted with the 1960s TV series featuring an Harley-Davidson with a sidecar for you know who. It was replaced by another Batcycle that was based on a 250cc Yamaha. The Batblade is a special motorcycle used by Batgirl in 1997’s Batman & Robin. It featured a body work similar to a  drag racer with a rear tyre straight out of a car.

The Batpod moniker though is exclusively used to refer to the motorcycle used in Nolan’s masterpiece The Dark Knight Trilogy. Featuring massive 20-inch wheels and a water-cooled single-cylinder engine, it was fast! (in the movies). The Batpod featured a unique steering design where it was steered with the shoulders instead of hands. And as we mentioned, it was part of the massive Tumbler and could be ejected when necessary. What about weapons then? The Batpod was armed with grappling hooks, cannons, and machine guns. More than enough for a quick crime fighting stint, right?

However, the coolest feature of the Batpod was its ability to rotate its chassis and change its orientation when it approached a wall. The chassis could also extend, lowering the motorcycle and helping Batman pass low objects. Not just Batman, Catwoman also found the Batpod to be practical as it can be seen ridden by Anne Hathaway in Dark Knight Rises.

A Batmobile might be the coolest thing on the road, but Batman’s highly civilised operations required him to use various modes of transportation. A Batcopter was the next best choice from his Batcave. It was first featured in 1966’s Batman and due to budget constraints, it was omitted from the 1960s TV series starring the charismatic Adam West. The specific Batcopter was actually based on a Bell 47 single-rotor single-engine light helicopter. To make it look the part and go in hand with our superhero’s flair, it was modified with canvas-covered tubular frames and painted red (Yeah, the old Batman apparently had a thing for red). The Batcopter came with huge wings and had the Bat logo embossed on its sides. Although the wings look cool and intune with Batman’s style, it actually reduced the lift by 50 per cent making it dangerous. But we highly doubt it was an issue for Batman.

The Whirly-Bat is a rather peculiar single occupant copter which was used by Batman. Batman and Robin developed the Whirly-Bat for aerial advantage over their enemies. But better equipped enemies meant that the single-seater copter was destroyed during its very first outing. But it was refurbished and used by Batman again when his legs were injured. The Whirly-Bat’s lightweight construction meant that it couldn't carry any gadgetry. It was again rendered useless during another outing to capture the notorious criminal, Mister Zero. It was later modified and made portable so that it could fit into the Batmobile. The Whirly-Bat was later updated with minor revisions and a grapple cable to grab objects below. The Whirly-Bat has only made its appearance in comic books to date.

The Batplane was  Bruce Wayne’s most prized possession that was reserved for those special and intimate occasions with enemies. It was first introduced in Batman Versus The Vampire comic series. It featured some cool tech and allowed our hero to park it mid-air. Batplanes were basically altered fighter jets from Wayne Enterprises. The Batplane II was a modified Wayne Aerospace W4 Wraith fighter used by Batman and Robin to fend enemies. The Batplane II could also transform itself into a submarine or a helicopter when needed. The aircraft underwent constant revision since its inception in the comic universe.

The movies, on the other hand, used the Batwing acronym and was first featured in Tim Burton’s 1989 movie. It featured two side-mounted mini-guns, lasers and four wing-mounted missile launchers. A completely novel version of the Batwing appeared in The Dark Knight Trilogy. It was referred to as the ‘Bat’ and was a  lightweight aircraft with a centrally mounted rotor.

The Bat's autopilot function was a rather interesting addition even though it wasn't working as intended(?). The Bat took design inspirations from the Harrier Jump Jet, Bell Boeing V-22 Osprey and the Boeing AH-64 Apache. The 2016 Batman V Superman: Dawn of Justice movie also features an eccentric looking Batplane which was remotely controlled by Alfred. The Batplane has also made its appearance in the animated series and the The Lego Batman Movie.

So which one of these Bat-vehicles is your favourite and brings back your fondest childhood memories of the Caped Crusader? Do let us know in the comments section!