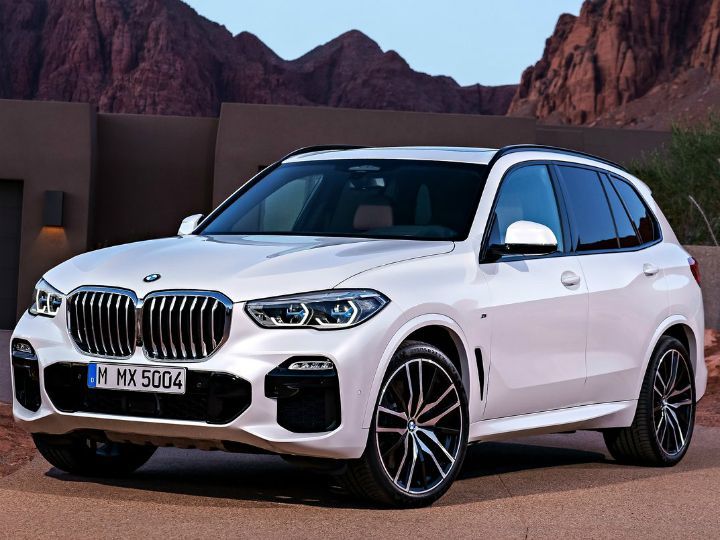 BMW is set to bring the latest iteration of the X5 to India on May 16. The fourth-gen BMW X5 is expected to be launched in two variants - Luxury Line and M-Sport. Based on BMW’s Cluster Architecture (CLAR) platform, which also underpins the 7 Series and 5 Series, the X5 features plenty of aluminium in its construction to make it lighter than its predecessor. It will also feature air suspension on all four corners, with height adjustment and four wheel drive steering which are absent in the current SUV.  The X5 has also grown up in size compared to the outgoing SUV. Check the the dimensions in the table below:

The new BMW X5’s design is more evolutionary than revolutionary. Yes, the kidney grille on the 2019 iteration has grown bigger. BMW’s matrix LED headlights flank the grille and do not merge into it unlike the previous-gen SUV. Gone are the round fog lights below the headlamps and in place of it comes a sleek LED fog light setup housed in aggressively designed air dams. At the side, the new X5 has more subtle creases running through its body. No aggressive wheel arches up here anymore. This hints that the new X5 will be a more road-biased offering than its predecessor. At the rear, the split LED tail lamps have grown in size and feature a new design. The size of the black cladding and dual exhausts have also gone up, making the rear look more sporty and aggressive.

Open the door and the evolution continues inside as well. It gets the latest dashboard design that’s seen on recent BMWs. The twin 12.3" driver and infotainment display are now connected to each other. The infotainment display features the latest iteration of BMW’s i-Drive system where you can control the screen either by touch inputs or via the swivel wheel on the centre console. Below the infotainment screen are a set of sleek AC vents with the climate control buttons located just below them. Depending on the variant you pick, the interiors will feature different trims and colour choices. BMW will also offer plenty of customisation options for the interiors with different colours, trims and feature additions. The new X5 gets plenty of tech and some of them include gesture control for the infotainment, wireless Apple CarPlay, wireless charging, touchscreen remote keyfob, remote parking, remote start, and more. Safety features on the X5 include seven airbags, ABS, traction control, and more. Internationally, the X5 comes with driver assist features like autonomous driving, adaptive cruise control and radar-based safety features, which aren’t likely to make it to the Indian car.

On the engine front, the X5 for India is expected to be equipped with the same 3.0-litre diesel engine as the current SUV, albeit with a few updates to make it comply with upcoming BSVI emission norms. The engine produces 265PS of power and 620Nm of torque in the new SUV which is higher than the current SUV's 261PS and 560Nm. BMW might also plonk in a petrol motor with a hybrid option at a later stage considering the shift to cleaner fuels for lesser emissions. The X5 will also feature BMW’s xDrive all-wheel drive system which shifts power to the front or rear on demand. BMW’s driving modes will also be available in the X5, which alters various parameters of the car based on the mode selected.

The fourth-gen BMW X5 will take on the likes of the Mercedes GLE, Audi Q7 and Volvo XC90. Prices are expected to start in the range of Rs 70 lakh for the base variant and go up to Rs 85 lakh for the top-spec M-Sport variant.