Ford Mustang Concepts That Made The Pony Car Iconic

As Ford celebrates producing 1 crore Mustangs, we take a look at the concept cars that contributed to the development of the iconic car through the years 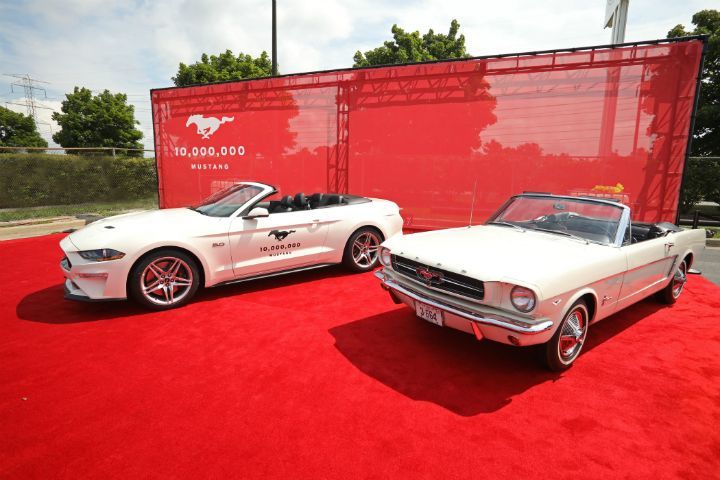 The 10 millionth (or 1 crore) Ford Mustang has rolled out of its plant at Flat Rock, Michigan, marking another milestone for the iconic pony car which has been in continuous production since 1964.

The Mustang, through the years, has been the result of Ford visionaries coming up with various ideas in terms of design and engineering, resulting in many concept cars over the years. Here’s a look at 13 of them, which helped shape the current form of the Mustang over the years.

One of the first concepts created in the endeavour of making a ‘sporty’ car with capabilities to give the Europeans some competition, the Avventura concept not only introduced the fastback-like design seen on the 1964 production model, but also some other elements like the shark-like nose and the cuts on the fender. It also incorporated a unique seating solution to make the coupe accommodate four people, with rear-facing seats at the back.

The Allegro concept followed the Avventura concept and was the first time the Mustang was seen in the flesh, albeit as a concept. The rear-facing seats were replaced by normal front-facing ones with a taller roof to give it sufficient headroom. The long hood, short passenger compartment became staple design elements on the Mustang ever since.

While not directly related to the 1964 production model, the Mustang I concept did lend its name and some design features to it. Basically a mid-engined, low nose, two-seat open-top sportscar, the concept inspired the cosmetic scoops on the rear fender in the production model and also its iconic name.

The final concept developed before the production model was finalised, the Mustang II concept featured a 2+2 seating and a small block V8 under the hood. The lack of the mandatory bumpers made it look weird, but other styling elements did make their way to the production model. The roof had a unique ‘chopped’ look, and was actually a removable fibreglass unit, with the concept being usually showcased without the top on most occasions.

The precursor to the 1969 Mustang Mach I, this design study showcased a larger coupe with a slammed roof, a huge fuel-filler cap, racecar-like ORVMs on the fixed plexiglass side windows and squicircle (square+circular) headlights. It featured a notchback-like design, where the rear windshield was part of the boot (like the Skoda Octavia). Early sketches also imagined a boot lid-mounted air-brake!

The biggest indication of how the second-gen Mustang would look, the Allegro II looked almost comical to some. Especially the low windscreen and the buttress that extended behind it, made the car look ill-proportioned. This also marked the trend of the Mustang growing in proportions, from a pony car to a muscle car.

Future generations of the Mustang (after 1973) could have been mid-engined if this concept was green-flagged for production. Despite having a 4.7-litre, V8 engine plonked behind the driver and passenger, the concept still featured a long bonnet and scoops behind the front wheel arches to feed air to the engine. Cost and handling concerns shelved the idea, though the rear design did make it to some of the later models.

One of the most radical concepts, based on the production version of the Mustang, the Milano concept paid homage to pro-touring vehicles which raced around the northern Italian city by the same name at the time. The large fascia and NACA ducts on the hood were supposed to help cram in more air into the engine. The wheels may look like classic wired ones but were made of cast aluminium!

A T-top (removal roof panel which left a T-shaped opening) with a smoother body showcased what the second-generation Mustang would look like. The second-gen Mustang was short lived though, with the car not being able to garner as much attention as the first model.

A Mustang rally car? Well, that’s what the Ghia designed Mustang RSX was supposed to look like. Short for Rallye Sport Experimental, the Mustang RSX was powered by a stock 2.3-litre, 4-cylinder engine (yeah, not a V8), but featured a shortened wheelbase, very wide front and rear track, and an aggressive squarish coupe design.

The guys at Ford went to town with this one. In anticipation of the launch of the fourth-generation model, the company used an iconic name to promote the new car. The Mach III was the one model, apart from the Mustang I, to not look anything like the production model. It was a roadster with a low windshield, had a bulbous carbon-fibre body and 19-inch five-spoke wheels. The 1995 production model, on the other hand was as boxy as any Mustang ever made.

The modern era of the Mustang began with the introduction of the 2003 Mustang concept. It bridged the gap between three generations of the Mustang’s past and the future. The round headlamps, shark-like nose, scoops behind the window and on the doors were modified for a modern look. Under the hood, was nestled a 4.6-litre supercharged V8 sending power to the rear 20-inch wheels.

A 5.0-litre V8 is the staple of any ‘sporty’ Mustang and the GT-R concept takes this to a new level. Made for Ford Performance by American sportscar manufacturer Saleen, the GT-R featured carbon fibre parts including the hood. The grille and front apron too were as less intrusive as possible to help let the air pass through to large cooling fans, the brakes and the intake. The side exhausts, 17-inch wheels and the large wing were other sporty additions.

One of the last Mustang concepts to be shown to the world was the amalgamation of ‘30,000 hours of blood, sweat and tears’ by famed designer Giorgetto Giugiaro and his son Fabrizio. The sloping hood and the fascia have had their influences on the latest generation of the Mustang. It featured a supercharged 4.6-litre V8 from the GT, completely reworked body panels, scissor doors with cameras for mirrors.