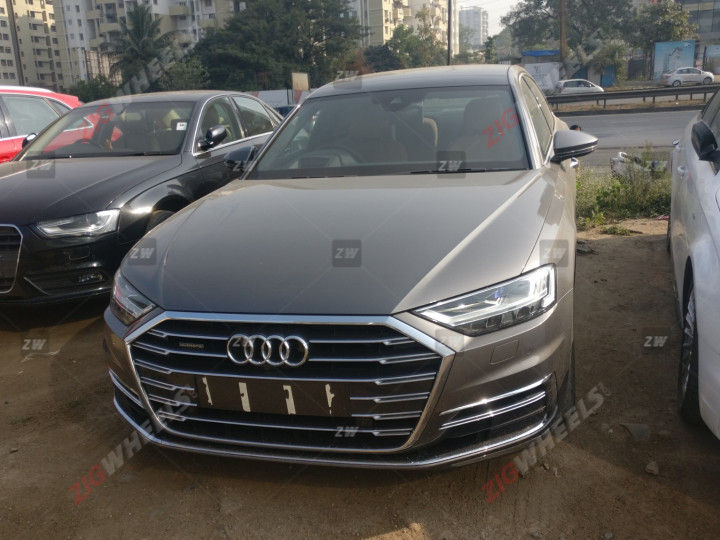 Audi’s upcoming A8L luxury sedan has been spotted in India. The flagship sedan from Ingolstadt will be launched on February 3 at Skoda Auto Volkswagen India’s media night ahead of Auto Expo 2020 in February. The event will also give us a glimpse of other upcoming cars from the Volkswagen Group.

The A8L is typically Audi with its sleek edges and curves. The front end comes with a slatted single-piece grille, the largest ever fitted on an Audi sedan, which are flanked by sleek LED headlamps. In profile, a prominent shoulder line runs through the side and the model seen here was sitting on 5-spoke alloy wheels. Moving on to the rear, the A8L comes with connected LED tail lamps, a first for an Audi sedan in India.

Inside, the A8L comes with Audi’s typical twin screen infotainment set up. While the design might be familiar (read our A6 road test here), there are a host of elements that differentiate it from its siblings. The AC vents and the tweeters pop up from the dashboard to welcome you while starting the ignition. Really cool! Then there is Audi’s Virtual Cockpit, one of the best digital driver’s displays in the business.

But the Audi A8L is all about the rear seat experience. Just like its predecessor, we expect it to come with the business class twin seat set up. Rear seat passengers could also get features like entertainment screens, individual climate controls, massaging seats, ventilated and heated seats, streaks of ambient lighting as well as a refrigerator to keep their champagne chilled!

Other features that could be offered in the India-spec A8L include Audi’s MMI infotainment system with connected car technology, Android Auto and Apple CarPlay, a Bang & Olufsen sound system, cruise control as well as powered seats with ventilated functions for the front two seats. Expected safety features such as a minimum of 8 airbags, ABS with EBD, front and rear parking sensors, a 360 degree camera as well as lane departure warning.

Going by its 55 TFSI nomenclature, the India-spec Audi A8L will come with a BS6-compliant 3.0-litre TFSI engine that develops 340PS of power and 500Nm of torque. This engine will be paired with a 48V mild-hybrid system for additional torque assistance. Power will be sent to all four wheels via an 8-speed automatic gearbox and Audi’s quattro all-wheel drive system. There won’t be a diesel A8 in the near future as Audi India is planning to choose the electric/petrol-only route in the BS6 era.

The 2020 Audi A8L is expected to be priced above Rs 1 crore (ex-showroom). As ever, Audi’s flagship sedan will lock horns with the Mercedes-Benz S-Class, the BMW 7 Series and Lexus LS500h!!!.