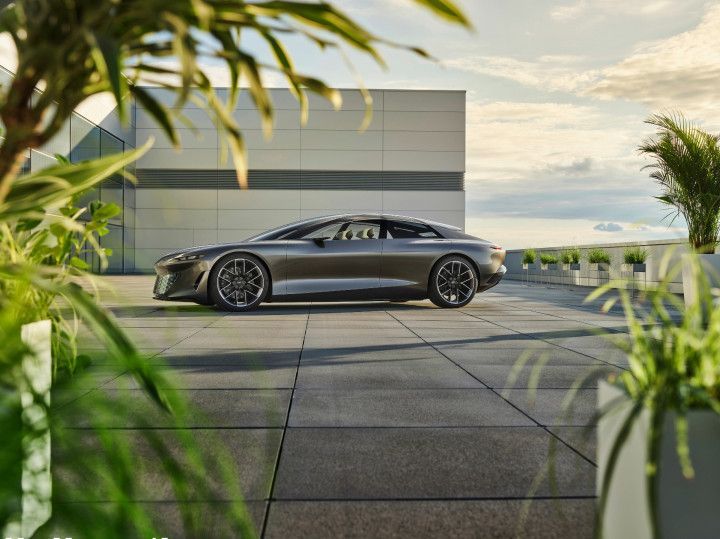 Audi has unveiled the Grand Sphere Concept, its second Sphere concept that previews the possibility of the all-electric next-gen A8. Set to debut at the upcoming IAA2021 in September, this concept pushes the pinnacle of luxury and autonomous driving technology. You can consider it Audi’s rival to the Mercedes EQS.

Let’s start this report with the Grand Sphere’s opulent interior. The doors open in a suicide style a la the Rolls Royce Ghost and welcome to you a cabin that would beat many top-class lounges. And as seen in these images, it’s finished in premium wood, leather, and aluminium. The seats push back and adjust to your preset position so ingress and egress can be easier.

And once you’re seated in front, the cabin design is extremely minimalistic due to the lack of screens. Rather, Audi has integrated them behind the wood that projects to you in the cabin. It’s a full width MMI system that displays all the info from your digital driver’s display to the infotainment.

The Grand Sphere concept also boasts of another cool technology: level-4 autonomous driving capabilities. Once you select it, the pedals and steering wheels retract inside so that you can relax and enjoy the ride. You can also use those screens to watch your favourite movie or attend a video conference call. The experience is further topped by a cooler in the centre console with champagne glasses!

Coming to its exterior design, the Grand Sphere concept’s silhouette is quite unique. The large single-piece grille is the only design similarity with current Audi cars. The short front overhang leads to the sleek headlamps and flowing silhouette that finishes in a fastback-like silhouette. The rear end, like current Audis, also gets a sleek LED light bar.

Propelling this concept are two electric motors that develop 710PS and 960Nm. They draw their power from a 120kWh battery pack and are capable of a claimed range of around 750km. It also can support charging speeds up to 270kW, by which it can recover 300km in 10 minutes. The Grand Sphere is no slouch when it comes to acceleration, with a 0-100kmph time in a bit over four seconds.

Audi has also fitted it with adaptive air suspension to ensure that you have a wafty ride as you’re being driven around. It can also control the pitch and body roll of the vehicle by scanning the road ahead. And last but not least, the rear wheel steering wheel should help maneuvering this 5.35 metre vehicle a piece of cake.

The Audi Grand Sphere clearly pushes the pinnacle when it comes to luxury and technology. The Ingolstadt carmaker says it’s a private jet on wheels. And you can have a closer look at it at the IAA 2021 slated between September 6 and September 12.