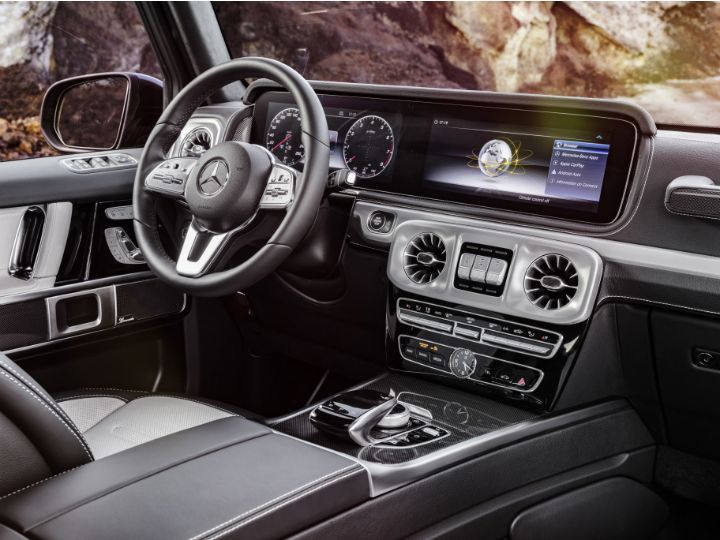 Mercedes-Benz has done it again. The three-pointed star has several new products in the pipeline, including new generations of its popular marques. One of the latter ones is the all-new G-Class, which is slated to break cover in Detroit at the 2018 North American International Auto Show (NAIAS). But, just like for the next-gen A-Class, the German carmaker has given us a preview of what the interiors of the 2019 G-Class will look like.

First up - the ergonomics. The slightly larger dimensions of the rugged SUV have translated to a bigger accommodation area for passengers. The front seats gain 38mm of legroom and shoulder room, while the elbow room has gone up by nearly 69mm. The rear passengers will find better ingress/egress space, thanks primarily to the larger doors. They can also enjoy the expanded legroom, which has gone up by nearly 150mm. Figures have also improved for the shoulder room and elbow room by 28mm and 56mm respectively. The rear bench also enjoys the third climate control and a multiple reclining functionality.

However, creating extra room in the cabin has eaten into the boot. Mercedes hasn’t revealed the official gulping capacity of the box-type luggage space, but it shouldn’t be a deal breaker. The designing team has been busy carving out more storage space for knick-knacks. By moving the transmission shifter to the steering column and opting for an electronic parking brake has freed up enough space for a larger centre armrest and cupholders. Even the top-load glovebox can gobble more stuff.

The new cockpit design, with its turbine-inspired AC vents and the 12.3-inch touchscreen display, is refreshing. The dash-mounted grab handle for the front passenger and the three buttons for differential locks housed between the central AC vents reminds us of what this SUV is all about. The analogue instrument cluster goes well with the car’s character too but Merc will install a second 12.3-inch screen to replace it in the fancier variants. The sporty three-spoke steering wheel is a busy place, with buttons to control the infotainment, a central touchpad and a rotating wheel.

In terms of features, the G-Class will flaunt heated, cooled and massaging front seats, draped in leather. Additionally, depending on the driving conditions, the active air bolsters will adjust automatically to keep the front occupants comfortable. The standard open-pore wood-trim accentuates the leather lining in the cabin. If that’s not your style, Mercedes will offer metal and carbon fibre inserts as optional extras. To literally top it all, the G-Class will boast a massive moonroof too.

For the sound system, a 7-speaker setup comes as standard. For an additional fee, Mercedes will fit a 16-speaker Burmester surround-sound system with a 590-watt amplifier. The infotainment will offer support for both Android Auto and Apple CarPlay.

While official specs of the entire package will be available in a few weeks’ time, the G-Class will still have the iconic bootlid-mounted spare wheel and the thumb-activated exterior door latches. We can’t wait for it come to India. However, that won’t happen anytime soon as Mercedes-Benz is expected to launch it as the 2019 model, with dealers in the US receiving their lot sometime later next year.

Also Read: Why Is Mercedes Counting On A Four-Door AMG GT?