The interiors of the new A-Class, with features like ventilated seats, dual-screen cockpit and turbine-like AC vents, will appeal to younger buyers 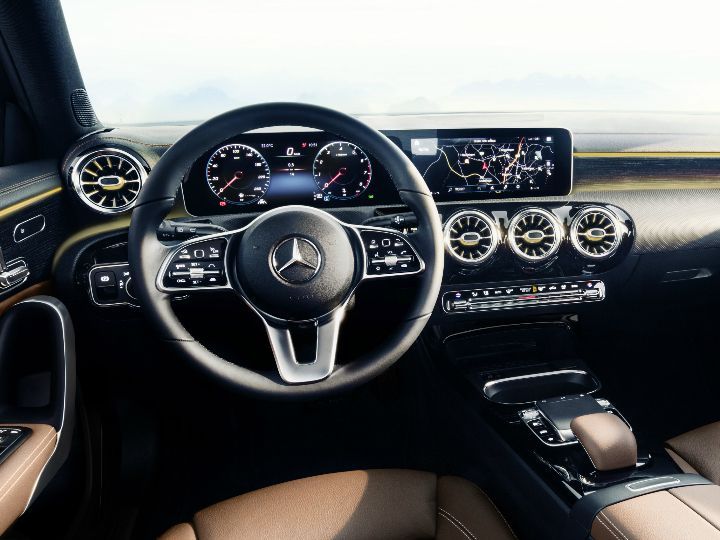 Ahead of showcasing the new A-Class at the 2018 Geneva Motor Show, Mercedes-Benz has revealed the interiors of the fourth-gen model. The new cabin is a big leap forward from the existing one and feels more premium, and upmarket.

The interiors of the new A-Class draw inspiration from the bigger E-Class and the S-Class. It gets a familiar two-screen cockpit setup on the top half, while the lower half get circular AC vents and a sleek automatic climate control unit. The two-screen setup is offered in three different options- two 7-inch displays, two 10.25-inch units and a combination of a 7-inch and a 10.25-inch screen. The first screen, of the two, acts as an instrument cluster, while the second screen (centre) will work as a normal infotainment system. The air conditioning system display has also been merged into the centre screen.

With the omission of the cockpit cowl due to the dual screen, the dashboard now runs seamlessly from one door to another. The AC vents have a new turbine-like design which is claimed to be inspired by a jet aircraft turbine. They also get coloured lighting in and around them, adding sportiness to their design. The steering wheel has also been replaced by a new 3-spoke unit borrowed from the Mercedes S-Class.

To make you feel more at home, the new A-Class is now equipped with a new ambient LED lighting system which offers 64 different colours and 10 different mood options. The seats get climate control and also offer massage function, adding to the driver’s comfort while on the move. In addition to the standard, two other types of front seats are also available with the new A-Class. It includes a comfort seat with 20 adjustment options and a sporty one.

Talking numbers, let's see how the new A-Class has grown over its predecessor. When it comes to the front seats, elbow room, shoulder room and headroom have gone up by 35mm, 9mm and 7mm respectively. Room in the second row has been bumped up by 22mm, 36mm and 8mm for shoulder room, elbow room and headroom respectively. With the new model, boot space has also gone up to 370 litres.

This exhibition of interiors by the German brand has left us more excited than ever to see the new A-Class break cover.