This is the third generation of the CLS to drop curtains 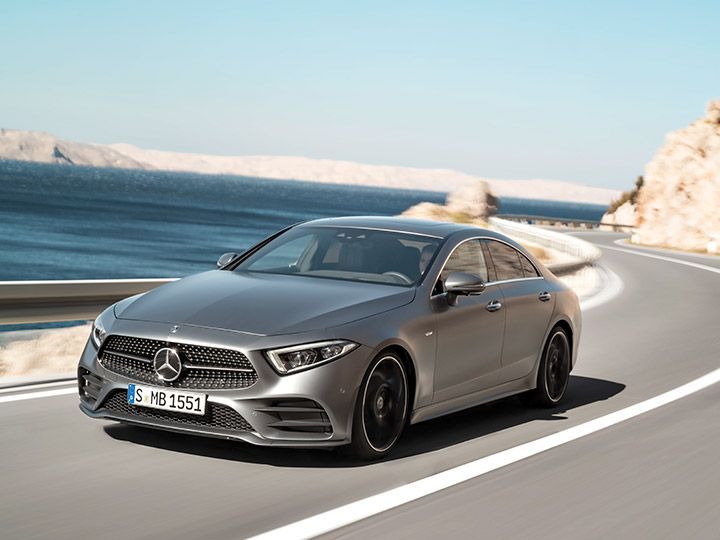 After dropping a teaser earlier this month, Mercedes-Benz has finally unveiled the third-gen CLS at the LA Auto Show. The new car builds on its predecessors when it comes to styling as it carries forward the German manufacturer’s new design language.

Upfront, it gets a new diamond grill which widens at the bottom, resembling the AMG GTR. New headlamps clusters are in place, flanking the wide grill and lending the car an aggressive look. The side profile is what we expect from a CLS -- it gets frameless doors, high waistline and lower roofline. The forward-slanting nose adds to its aggressive character. At the back, the CLS is coupe-ish as the roofline blends smoothly with the tail. The split LED tail lamps housed in a large bumper along with air vents on the sides give it a sporty look.

Coming to the interiors, the CLS’ cabin looks quite similar to that of the E-Class we have in India. It gets two 12.3-inch displays covered in single glass replacing the instrument cluster and the infotainment screen. The central console, as usual, house controls for the automatic climate control and the infotainment system. It also gets a 64-colour ambient lighting system. As we all know, the CLS has always been a four-seater but this time it's different. Now it can seat five people, and to accommodate the extra luggage of the fifth the rear seats can be folded down in the ratio of 40:20:40, giving access to 520 litres of boot space.

To keep its passengers comfortable, the new CLS also gets an 'ENERGIZING' comfort control system. This links various comfort systems like climate control, ventilated seats, ambient light and music system in order to set up a tailored ambience to suit the passenger’s mood. This system comes with six different modes - Freshness, Warmth, Vitality, Joy, Comfort and a Training mode.

Under the bonnet, the new CLS is being offered with three new engines: two diesels and one petrol though all three have the same 3.0-litre V6 configuration. Starting with diesel -- first in the lineup is the CLS350d, producing 286PS of power and 600Nm of torque. Second is the CLS400d, making a higher 340PS of power and 700Nm of torque. The V6 petrol on the CLS 450 on the other hand boasts the highest power rating of 367PS and 500Nm of torque. Adding to the petrol engine’s capability, Mercedes-Benz has thrown in a 48 volt ‘EQ boost’ electric system which provides extra 22PS and 250Nm. When launched in India we expect it to get the CLS350d motor which also powered the older CLS.

We expect the CLS to enter the Indian market in the later half of 2018 and as a CBU; however, there is no word about its India launch from the manufacturer yet. When launched it will slot between the E-Class and the S-Class like its previous generation which was launched in India back in 2014.