Skoda Kodiaq Is Available For Delivery By April 2023

It’s the exact same model but with prices hiked by Rs 1.5 lakh Skoda has re-opened bookings for the Kodiaq SUV for the first batch due to arrive in 2023. This year’s allotment of SUVs had already been sold out as early as February; if you book now, the SUV will be delivered by April 2023.

Skoda imports the Kodiaq in small batches in the form of complete knock-down kits (CKD) that are locally assembled. It rivals the Jeep Meridian and MG Gloster.

The new Kodiaq has revised pricing for all three variants, Style, Sportline and Lauren and Klement.

All prices are ex-showroom pan-India

Prices are up by a uniform Rs 1.5 lakh across variants. Skoda has set the booking amount at Rs 50,000, but you can only order the SUV at an authorised dealership, not online. There’s no word on the size of the first 2023 batch, but expect it to be limited to a few hundred SUVs.

Which features and engines are offered on the Kodiaq?

For the extra money, the Kodiaq doesn’t get any new features or equipment. It’s still a commodious, feature-packed 7-seater SUV with creature comforts such as a panoramic sunroof, three-zone climate control, 12-speaker Canton sound system and heated and ventilated front seats.

Its safety package includes features such as 9 airbags, ESC, a 360-degree camera and Park Assist System.

The Kodiaq has a 190PS/320-Nm 2-litre turbo petrol engine under the bonnet. It’s paired with a 7-speed dual-clutch automatic transmission and all-wheel-drive (AWD) system as standard.

Booking timelines for the subsequent batches of the Kodiaq will be announced at a later date. If you really want one, the clock’s ticking. 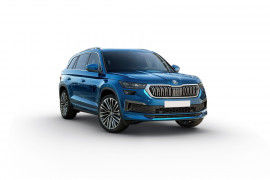