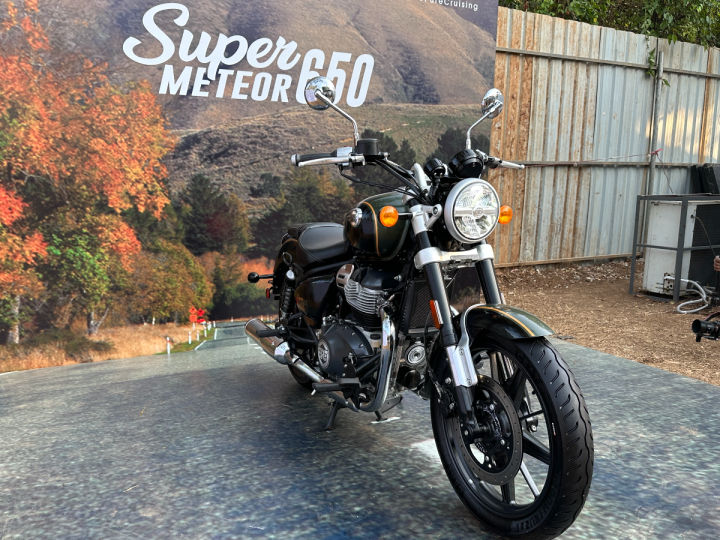 After years of spotting countless test mules of the Royal Enfield Super Meteor 650 on Indian roads, the big cruiser has finally been showcased in India amidst a sea of Enfield fans at Rider Mania 2022. Now that we see this bike in its flesh, here’s a closer look at what it packs:

A glance at the new Super Meteor 650 and its cruiser stance is very evident. It has a laid-back rider triangle sporting forward-set footpegs, a scooped seat, and an easy to reach handlebar.

The Super Meteor 650 carries a retro theme all-around and features a round LED headlight (a first for a Royal Enfield), beefy metal fenders (with aluminium bracket for the front unit), chrome-laden parts and a teardrop-shaped 13.7-litre fuel tank as well. Even the aluminium cover on the rotary-style switchgear and monza fuel cap accentuate its retro styling.

The Super Meteor 650 also gets adjustable levers, another first for a Royal Enfield, along with a USB charger on the left side panel. You’ll have to open the side panel, connect your phone, and there’s a notch through which the wire can come out. You can either connect it directly to your phone or get an extended USB cable and route it to the handlebar, to be used with a smartphone holder. The aluminium cover on the switchgear oozes premiumness, not to mention the powder coating on the frame and other parts.

The Super Meteor 650 is powered by a 648cc, parallel twin, air-oil-cooled motor making 47PS and 52.3Nm, which is 0.3Nm more when compared to its 650cc siblings. Even the six-speed gearbox is shared with the Interceptor 650 and Continental GT 650. The finish on the engine casing is premium and we think it is a nice touch.

The monopod instrument console on the Super Meteor 650 is the same as the Meteor 350. This semi-digital instrument console has basic telltale information along with bits like clock and a gear position indicator, something that its siblings do not have. The console is complemented by a Tripper navigation pod, offered as standard fitment on both variants.

The Super Meteor 650 gets a new tubular chassis and features a 43mm Showa USD fork (another first for Royal Enfield) with 120mm travel and twin shocks with 101mm travel. For braking, the Indian marque has employed a new braking hardware consisting of a 320mm front and 300mm rear disc setup.

Just like every Royal Enfield bike, the Super Meteor 650 too comes with a range of accessories for buyers to choose from. Click here to see the entire list.

Royal Enfield is offering the Super Meteor 650 in two variants: touring and standard, amongst which there are a total of seven colour options to choose from – Astral Black, Astral Blue, Astral Green, Interstellar Gray, Interstellar Green, Celestial Red and Celestial Blue. It will be launched early next year with an expected asking price of Rs 3.35 lakh (ex-showroom Delhi).