The new Yamaha Saluto 125 replaces the YBR 125 and will pose an alternative to the Honda Shine in the growing commuter motorcycle segment. For more prices, specifications and pictures of the Yamaha Saluto 125 log on to ZigWheels.com 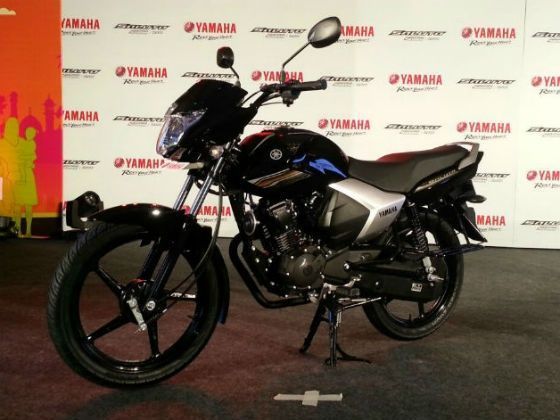 Yamaha Motor India wants to follow a top down approach. So, after having established itself as a maker of sporty, good looking and desirable motorcycles even in the 150cc class with the YZF R15 and the ever popular FZ series, it is now training its guns towards the high volume commuter segment. But, instead of entering the crowded 100-110cc segment, Yamaha has decided to tackle the 125cc segment first.

The Yamaha Saluto 125 isn't the Japanese bike maker's first attempt at the segment ether; it has had the Gladiator, the SS125 and the YBR 125 in the past, but none of these models sold well. Reason? Relatively lower fuel economy and dated styling compared to its competitors.

Styling
The Yamaha Saluto 125 has tried to address the styling bit and it is a completely new design from the ground up. New front faring, new fuel tank and better looking side panels help give the Saluto that much needed new bike aura. But, it is a conservative design; it almost borders at the boring. And the instrumentation - again all new - fails to impress with its design or read out.

But, giving credit where it is due, the Yamaha Saluto scores high on quality; the paint finish - at least on the launch bikes - looks rich; and the finish overall, be it for the engine, the switchgear or even the clocks and the mild stickering, is spot on. The Saluto also gets alloy wheels, electric start and an alloy grab handle as standard.

Engine
The engine powering the Yamaha Saluto might be a 125cc, single cylinder, air cooled unit but it isn't borrowed from previous 125cc bikes from Yamaha India's stable. It is a brand new unit developed with the sole idea of delivering high fuel economy. Employing Yamaha's BlueCore philosophy, this engine too uses lighter parts and friction reducing components and manages to return 78kmpl in the ARAI test cycle. In the real world we can expect this efficiency to drop to 60s.

The new engine which is down on capacity compared to the older 125cc engines from Yamaha, develops 8.3PS of max power and around 10Nm of peak torque. Now these figures are relatively low for a 125cc motorcycle but because they arrive earlier in the rev range Yamaha claims the Saluto won't prove to be a dud on the road, even with a pillion on board. What we can also expect, is class leading NVH and refinement levels says Yamaha. The engine is mated to a 4-speed gearbox.

Ride and Handling
The Yamaha Saluto is a brand new motorcycle from the ground up. So apart from the fresh styling and the new engine, the Saluto also gets new cycle parts. The single downtube diamond frame that uses the engine as a stressed member is lighter than before. The swingarm is new too and even though the suspension follows the same basic layout as older 125s - telescopic forks upfront and twin coil over dampers at the rear, these have been tuned differently to return a more comfortable ride; claims, we can only verify once we get to ride the motorcycle. But, yes, one thing is for certain, the Yamaha Saluto does have good seating ergonomics. Its commuter friendly tall and pulled back handlebar, forward set footpegs and a well padded seat that leads into a well shaped tank, do make for comfortable seating.

Price
At Rs 52,000 the Yamaha Saluto is well priced for a 125cc motorcycle. But, when one starts looking deeper, the lack of a disc brake option, the low power figure and the lack of any particular USP, do take away from that pricing advantage. As we see it then, the Yamaha Saluto must now prove its worth with the riding experience it delivers for it to be considered as a worthy alternative to the likes of the highly popular Honda Shine.