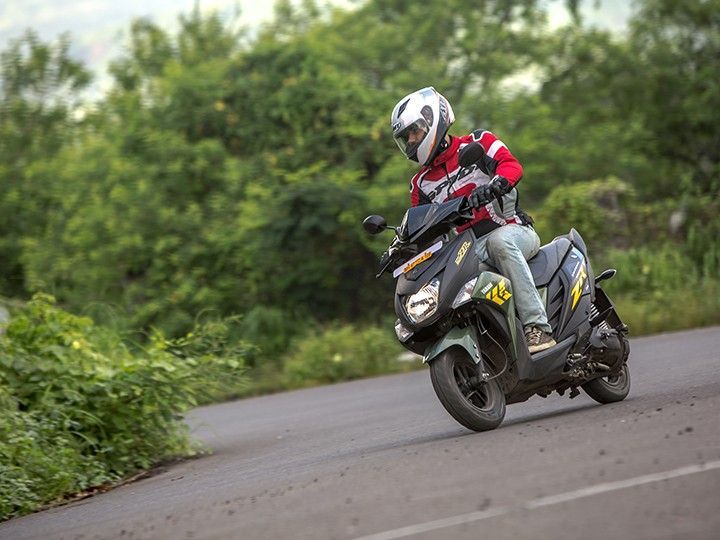 After suffering rather disappointing returns in the previous financial year, India Yamaha Motor has bounced back in style over the past few months. The Japanese manufacturer continued on its upward trajectory last month as well, having sold close to 75,000 units in the country and posting sizeable growth numbers too.

The company has fittingly attributed this success to its ‘impeccable line up of scooters’ that has most recently seen the addition of the Cygnus Ray-ZR, which was first showcased at the 2016 Auto Expo in Delhi earlier this year. After having appealed to younger ladies with the Ray scooter not too long ago, Yamaha quickly made it known that with the Ray-ZR, it is now aiming to lure ‘real boys.’

The manufacturer has taken this branding so seriously that the scooter even has its own #RayZRMeraSwag anthem, sung by Indian rap sensation, Badshah. The video even had its usual share of... ahem skimpily dressed women and sunglass-clad gentlemen to appeal to the target audience.

But the big news is that we got hold of the scooter in Mumbai last week. And being the highly responsible automobile journalists that we are, we opened the Ray-ZR’s throttle on the highway, manoeuvred it through city traffic and pushed it up on some fairly hilly terrains to bring you the best and the worst of this exciting new product from Yamaha.

So, does the Yamaha Cygnus Ray-ZR actually live up to all the ‘swagger’ in its promotional video? Read on to find out…

When I first saw the Ray-ZR’s images from the Auto Expo, the design looked a little overcooked, in all honesty. However, upon laying my hands on it in flesh, the scooter took me by pleasant surprise with its sporty appeal. In fact, it is so muscular that you could easily fit a mightier engine under its fairing.

The aesthetics are a sort of a radical departure from its Ray cousin, thanks to the funky bits of plastic. The cat face shaped headlamps are mounted on the deeply sculpted front mask while the front turn indicators are also astride on the side. They further extend into dual-tone side body panels that seem to be slightly inspired from the Yamaha Fazer.

The mat is integrated on the footboard as you can also see the four screws that keep things together. The handlebar cowl has been straight lifted off from the Ray Z, and so are the rear view mirrors. The hook features along the keyhole that gets a Yamaha-first shutter lock while the quality of the switch gear, borrowed from other Yamaha scooters, is also quite tidy.

The sides sport grooves that run along the seat while the motorcycle-like turn indicators, mounted on the rear fender, are not integrated on the edgy tail lamp – a first for any scooter in India. The ‘rising air tail’ design of the grab rail reminds you of Batman’s mask and combines well with the comfortable seat cushion for the pillion riding experience.

Talking of features, the optional 170 mm front disc brake, which is the first for any Yamaha scooter, steals the show. This comes with new black alloys, a large 21-litre underseat storage and a pair of front pockets that are spacious enough to store a water bottle or even your riding gloves.

The instrument cluster, comprising a spider web-shaped analogue needle-type console, looks well thought out. Light guides are positioned to illuminate the main dial, but some digital bits are missed. Downsides remain the absence of a passing light switch and a brake lock lever. Also, being targeted at the youth, the Ray-ZR does miss features like a USB charging port, unlike some of its contemporaries.

At the heart of things is the same air-cooled 4-stroke, SOHC, 2-valve 113cc engine that also does duties on other Yamaha scooters. Good for 7.1PS at 7,500rpm and 8.1Nm at 5,500rpm, the engine is equipped with Blue Core technology that enhances combustion efficiency, according to the oriental manufacturer.

The Ray-ZR tips the scale at a paltry 103kg but it still feels slow off the blocks as the continuously variable transmission (CVT) takes time to kick in initially. Once off the mark, the engine then flaunts high levels of refinement in the mid-range. Upon opening the throttle further, power is available at the drop of the hat as the Yamaha engineers have done a good job to minimise losses.

The economy range, like many other scooters, lies between the 40kmph and 50kmph range. The sweet spot on the Ray-ZR though can be found between the speeds of 50kmph and 60kmph as it cruises comfortably till 65kmph. For adrenaline junkies, the scooter was also able to attain maximum speeds of past 80kmph on an empty highway stretch.

Speaking of torque, the Ray-ZR barely broke a sweat while tackling hilly terrains. Moreover, the NVH levels are also on the lower side. One of the most remarkable features on the scooter though, was its fuel efficiency. The company claims a figure of 66kmpl and to my own surprise, our mileage run results didn’t vary too much at around 58kmpl.

The fuel tank capacity is also sufficiently large at 5.2 litres. The electric start worked perfectly well even in early morning mist on our test mule, while the main stand needs to be affected whenever you have to crank the engine with the kickstart, as opposed to the TVS Jupiter.

Like all other Yamaha products, the Cygnus Ray-ZR also makes no qualms about its ride quality. The telescopic fork on the front, which is a notch higher than the trailing link type on the likes of the Honda Activa, makes for a hard enough suspension for decelerating in tough traffic conditions. The swingarm on the rear complements the hold-up characteristics of the scooter equally well.

Ergonomically, the Ray-ZR feels tall enough for an average youngster with the seat positioned at 1,115mm; touching the feet on the round is relatively easy for shorter people too. Also, there is enough space for lanky people to rest their feet on the footboard and even turn the handle without all the inappropriate elbow-thigh contact. The cushion on the seat feels a bit narrow for the rider but is firm enough for longer rides.

With the tried and tested underbone chassis, the handling on the new Yamaha scooter is pretty crisp as well. With a hint of caution, one can have some fun on corners and bends too, given the nimble handling of the Ray-ZR and the firm road grip provided by the 90/100-10 53J tubeless tyres. Additionally, the set of 10-inch alloys make the Ray-ZR an agile and easy-to-manoeuvre scooter in Indian tarmac conditions. While tackling bigger speedbumps and the post-monsoon potholes though, the 130mm ground clearance is somewhat found wanting.

Coming to the biggest talking point in this section, the Ray-ZR mule that we were testing was equipped with the optional hydraulic single disc brake, which is the first for any Yamaha scooter. The disc comes in as a handy feature for young riders, who at times tend to get carried away on the accelerator, and is totally worth the extra premium that it commands. The mechanical leading trailing drum brake plays second fiddle on the rear as you get the same stoppers on the front if you go for the cheaper version of the scooter.

With Badshah as the face of the scooter, a youthful design and well-engineered mechanicals, the Yamaha Ray-ZR constitutes a fairly attractive package for college-going boys. It could also make for a safer and much cheaper alternative for young men who opt against buying motorcycles. In truth, the scooter could also attract the fairer sex with convenient handling mannerisms, thus supporting its cry for also being a family scooter.

On the business end, the Ray-ZR has been priced at Rs 52,000 (ex-showroom, Delhi) as the disc brake version would further cost a premium of Rs 2,500. While some might argue that the number’s read fairly steep, the Ray-ZR looks like a decent bet with everything that it has on offer – unique styling, ample features, Yamaha’s reliable handling and great fuel economy returns. What could further work in the scooter’s advantage is that it moves the goalpost forward for direct rivals that are targeted at boys aged between 20 and 25 years.

Talking about downsides, a trade off from the large number of plastics parts in the Ray-ZR is the correspondingly higher cost of repair in case of damages. Due to the same reason, the cost of insurance will also tend to go north. In addition, question marks persist about long-term dependability of Yamaha products and the limited dealership network; but if the Ray-ZR manages to answer them, then it sure will make up for a great option for young men to invest in their first rides.