A four-cylinder petrol engine has dropped the Macan’s starting price considerably and brought it within reach of many more luxury car buyers. Does this two-litre four-cylinder-powered crossover still deliver a proper Porsche experience? 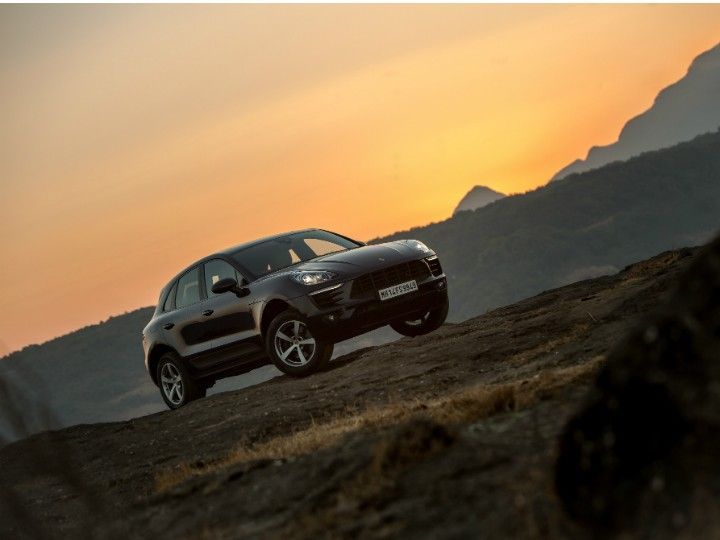 The most affordable vehicle in a luxury car maker’s lineup runs the risk of being looked down upon. In 2013 the Macan became the most affordable family in the Porsche lineup, but it showed everyone that, just like the Caynne, it was a Porsche alright.  Albeit a smaller and tighter one. Now, the Macan has become all the more accessible thanks to a new four-cylinder petrol engine. While this affords it a tantalising Rs 76.84 lakh ex-showroom price tag, we take a closer look to see just how wee it satisfies the itch for a Porsche.

If you are worried about pace, don’t be. The Macan R4 is no slouch. The four-cylinder two-litre engine follows the standard template that lets downsized engines provide punch and drivability, which is turbocharging and direct-injection. The numbers are 247PS and 0-100kph in 6.7 seconds, as claimed by Porsche. In our tests we clocked 7.01s. Fast? Plenty. The Macan diesel is faster, by the slow blink of an eye, but the petrol makes a case for itself in other ways.

Let me draw you back to the numbers. The R4’s 370Nm of torque is nowhere near as hefty as the diesel’s 580Nm. But then, it is dished out flat and clean from 1600 rpm all the way to 4500rpm. The diesel’s peak twisting force is only between 1750 – 2500rpm. The result is ease of use. The Macan R4 feels easygoing and at home in everyday traffic. It is also quiet and smooth, which makes it feel quite calm while commuting.

Of course when you put your foot down, be ready for a surprise, because this small four-cylinder engine can rev! The revs and the speed climb rapidly and steadily, and a mild rasp eggs you to keep your foot down. On the first open stretch of road I put my foot down and I was the one left surprised as the Macan kept on accelerating well after I had expected the limiter to cut in. And then we were doing some properly fast speeds.  There were two things at play: first, the Macan revs steady and strong up to its near 7000rpm; and, secondly, the Macan has tall gearing! As a result, 1st gear is good for around 60kph and in third you are knocking on 150kph!

The trade-off is that at lower speeds, when you press down with a bit more urgency, the responses can feel a bit tame. However, with the super-slick 7-speed dual clutch gearbox at hand, you aren’t left wanting for too long. The test car was equipped with Sport and Sport Plus settings for the drivetrain, and these sharpens responses further. Along with paddle shifters you can hustle the Macan as hard as you want and not come away disappointed. All in all it felt very reassured and absolutely smooth when dealing with an enthusiastic driver, city traffic, or the highway.

This is a bit of a tough one to call. We were looking forward to driving the R4 to see just how well it would ride and drive on regular steel springs. As experienced on the Cayenne, the less expensive setup is very usable without detracting from the driving experience. However, the Macan R4 that was available for test was equipped with the optional air suspension, along with a whole load of extras which we will discuss a little further down. But, as it were, the Macan was impeccable.

The air-suspension has three steps to adjust firmness. What makes it impressive is that even in the sportiest setting the suspension does not feel harsh even though body control is fierce. The grip was astounding, begging you to turn in later and harder. The air-suspension ensured that it remained flat through corners. As a result, my colleagues had a tough time capturing a dramatic cornering shot as the Macan exhibited next to no body roll. Grip, courtesy of the all-wheel drive system, was just as remarkable.

The Macan grips and turns with a fluidity and ease that forces you to recalibrate how late you can turn in. While the steering is light and direct, it lacks a bit of feel that would otherwise have made the Macan plain delicious.

What you can’t make out in pictures is just how small the Macan really is. The Macan, despite being longer than the Audi Q5 with which it shares its platform, sits lower and is a bit narrower too. As a result it looks a bit smaller. On the upside the soft and rounded design is distinctive and head turning. The low stance, the rolling roofline and the raked out rear window make it look sporty and more 911-esque than the Cayenne.

The LED headlights complete the Macan’s signature Porsche look. However, these lamps with cornering functionality are optional extras. The R4 makes do without more of the flash factor. The first thing you notice is that the 18” alloy wheels look particularly bland. Also, there’s no chrome lining for the window opening and there are no roof rails either. And the two exhaust tips poking out of the rear bumper are the single tube variety.

On the inside the Macan feels every bit as special as you expect a Porsche to. It looks well thought out and classy, like a crisp white shirt worn with discrete cufflinks. Fettled with the Sport Chrono pack and Apple CarPlay connectivity module, the Macan felt rich and well equipped. However, with all the extras on the test Macan we expect the price to rise by Rs 18 lakh over the base Macan!

The Macan R4 might be powered by a humble two-litre four cylinder engine, but going by the driving experience it is rich in character with convincing performance. While fine tweaks could have made it more urgent and just a bit more exciting, you can’t fault it for much else. While the extras on-board make it difficult to judge the R4 on other parameters, it is clear that choosing the four-cylinder crossover from Porsche isn’t something you will have any trouble defending. The Macan R4 is quick and smooth, comfortable and composed, versatile and engrossing, that too at a friendlier price tag. And, that is hard to argue with.