Has Mercedes-Benz ventured into uncharted territory with the GLE450 AMG coupe? And does it deserve an AMG sport badge? We find out if the new coupe SUV from the German automaker is worth your money! 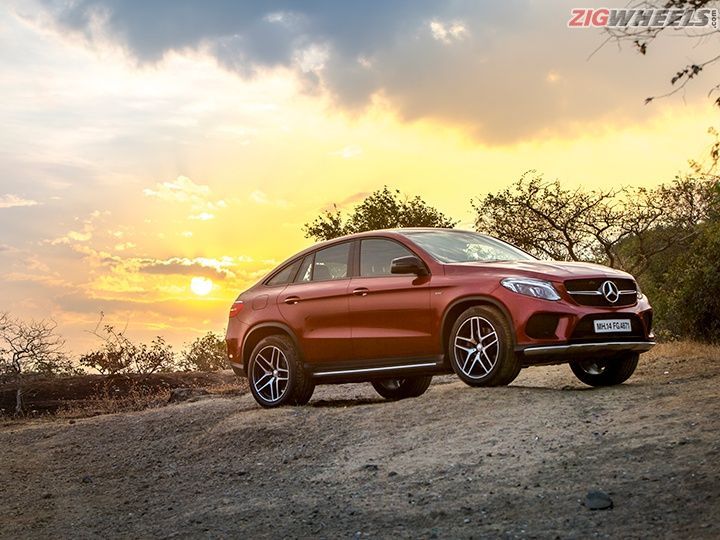 The first thing that comes to mind when someone says the word SUV is a big bulky chunky (and all other ky ending adjectives that one can think of) vehicle which has a high ground clearance, large tyres and usually an aggressive look. But this standardized response to the term SUV has long changed. We now have compact SUVs, crossovers and then something like what we have here today...the SUV coupe. And this, the GLE Coupe, is Mercedes-Benz’s answer to the growing segment.

Well, look at it. I for one have always been a fan of the coupe-esqe SUVs and the GLE Coupe is possibly the prettiest one of the lot. The one we have here is the AMG Sport variant and is the only one available in India and for once we are glad that Mercedes-Benz has only launched a higher spec version in India. As expected, the front fascia is dominated by the large blacked out grille which sports a single split-slat that prominently displays the three pointed star in the centre. Being the AMG sport variant, you also get the AMG sport bumpers with the silver scuff plate which in a sense is similar to what you get on the likes of the GLA45 AMG. And as with everything else these days, you get LED headlamps mated to LED daytime running lights.

Move around the side and the GLE coupe’s looks really start to come into play. The coupe roofline looks smooth and gives the GLE a great and extremely aggressive overall stance, especially in this deep red paintjob. You also get a set of 21-inch wheels that although are huge on paper, look a little smaller than they should on this car. We also like the overall level of smaller details on the GLE coupe. For example, the passenger side steps have a great brushed aluminum look to it that just gives the car a bit more character.

Around the rear, the GLE coupe sticks to the new design language that all Mercedes-Benz coupes now adhere to. You get horizontal tail lamps that are connected with a thin chrome feature and a set of quad tail pipes that are inset into the silver scuff plates on the bumper. We also like the subtle yet effective lip spoiler on the boot although an electronic spoiler like the one on the AMG GT would have really been the icing on the cake!

For a SUV that looks this cool on the exterior, the interior is a tad bit disappointing in terms of sheer design. Sure, the overall look, feel and touch is extremely premium, but there is just that bit of drama missing and that is a real disappointment. You do get just a hint of sportiness with the flat bottom steering wheel, the chequered flag speedometer console and the black leather interiors all around but there is no carbon fiber accents or even simpler contrasting color accents on those either. I for one am sure that most of these options are available in international markets and Mercedes-Benz India should seriously consider incorporating them. And while you are at it, maybe a set of red or yellow seat belts would be great too.

That said, it isn’t all dull and gloomy in here. There are positives. Space for one is not short like you would expect on some of the coupe SUVs. At the rear, there is more than enough headroom for even the taller person to sit comfortably. The seats are wide and offer great under thigh support which would mean enough space and comfort for three passengers. At the front, the GLE coupe’s seats that can be adjusted electronically to get the perfect driving position are comfortable and offer great side support. And side support is definitely something you need in this SUV, as you will find out a little later. Other features of course include the likes of a large sunroof and the excellent large screen that is combined with the easy to use Mercedes-Benz control knob.

If we thought the interior was slightly drab and boring, all was forgiven once we fired up the GLE coupe. Now as we mentioned earlier, the variant we have here is the GLE450 coupe in the AMG Sport guise and that means it gets a 3.0-litre twin-turbocharged engine that makes an impressive 370PS of peak power and an equally impressive 520Nm of peak torque. But it is not what the numbers say, it is what you can actually get out of them that matter and that is where the GLE450 does not disappoint. For starters the sluggish 7-speed gearbox has been shown the door and replaced by a crisp new 9-speed dual clutch unit that shifts much quicker than its predecessor. The engine itself is extremely lively and revs hard while delivering linear power delivery. Of course, the GLE450 is mated to an all-wheel-drive setup which means that there is absolutely no drama whatsoever while accelerating (apart from the fact that you get glued to the back of your seat).

Shift the drive mode to Sport+ and the relatively sedated SUV comes alive almost as if it has received a shot of pure adrenaline. The engine responds much better to throttle movements and of course, the gearbox responds even faster to tugs on the paddle. But someone who buys a car like the GLE450 is not really looking for all out performance to scorch race tracks. And Mercedes-Benz knows this. Which is why we now come to the best part of the GLE450 coupe, the exhaust note. Now we all know how the thoroughbred AMGs snarl and growl. And although this isn’t really a full-fledged AMG, the GLE450 still does most of the same. In fact, the blip and crackle from the exhaust on an upshift is so addictive that it made us feel like little children watching Baywatch for the first time ever.

Being an AMG Sport badged car, let us talk about the handling and braking aspects of the GLE450 AMG sport first. In normal comfort mode, the GLE450 behaves like most normal SUVs would around a bend, but just like with the engine, the Sport and Sport+ modes turn it into a different animal. The GLE450 AMG Sport corners well for something this large and this heavy and is certainly a lot more poised than the likes of the previous generation ML63 AMG. The large tyres and big wheels of course help but on the whole, the GLE450 coupe certainly feels really sorted for an SUV. Of course, the fact that it doesn’t make astronomical amounts of power also makes it a lot more usable around the tight and twisty roads that we tested it on. That said, as a balancer, chucking the GLE450 coupe into a corner, even with the great suspension setup working overtime still cannot mask the fact that this is a heavy SUV an not a nimble sportscar.

If you want to use the likes of the GLE450 AMG on a daily basis, here is a word of caution. It is not comfortable. Not by a long shot. In comfort mode, the firm suspension makes it extremely jittery over undulated roads that we here in India are ‘blessed’ with. Surprisingly, the moment you stiffen the GLE450 up by putting it into Sport, the car becomes a lot more comfortable and usable. We are guessing the ‘Sport’ part on the AMG sport series is a very subtle hint then! The GLE450 also gets a huge set of brakes and although they are pretty much on point, use them hard over extended periods of time and they do start to show signs of fade. Again, this is not because of the way the brakes are constructed, it is just about the fact that the GLE450 weighs as much as a moon and this puts a lot more stress on them.

The Mercedes-Benz GLE450 AMG Sport Coupe is priced at Rs 86.40 lakh (ex-showroom, Delhi) which makes it about Rs 16.50 lakh more expensive than the most expensive GLE in its standard form that is priced at Rs 69.90 lakh. For that you do get a little less practicality but a lot more style. Of course, the GLE coupe is only available with the 3.0-litre petrol engine as compared to the diesel you get on the standard GLE which means that the coupe gives you a lot less in terms of fuel efficiency. So at the end of the day, you could have fuel economy and practicality vs a lot more style.

The GLE450 AMG Sport Coupe is a tough car to critique. On one side, you have that gorgeous body and good handling as positives. And on the other hand you have the well made but slightly boring interiors along with the firm and jittery ride as partial negatives. But being automotive journalists first and petrol heads a close second, we are willing to forgive these small follies in the light of what is possibly one of the better petrol engines we have driven in a while. And come to think of it, the GLE450 is a great value for money product too with its nearest competition, the BMW X6 priced almost Rs 30 lakh more. The final verdict is quite clear. The GLE450 AMG Sport coupe is not for everyone. But for those who want something different that will stand out is a sea of grey, black and white luxury SUVs, it is the perfect alternative!

Recommended Variant : GLE Class 250 d
Was this article helpful Yes No
Sorry about that