With an impressive nine-speed automatic and a new badge at the back, this Mercedes middleweight tries to find its place in the luxury SUV space 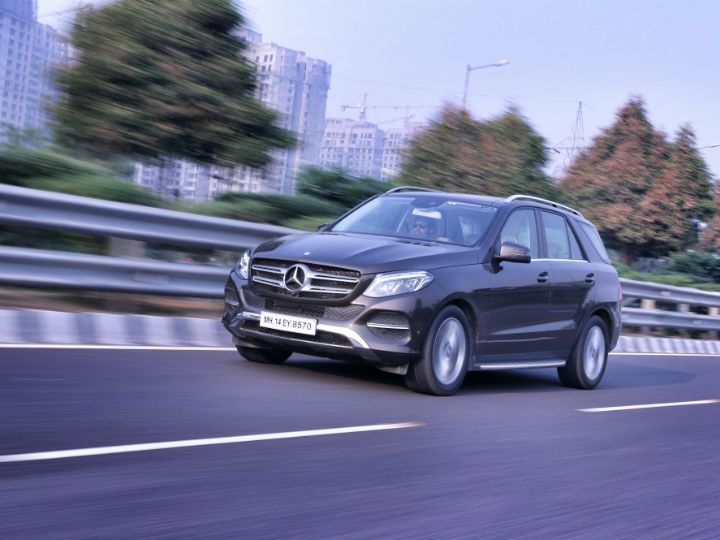 The car in these pictures is the Mercedes-Benz GLE, a new name for the ML-Class but also with a host of cosmetic and mechanical updates that aim to make it more pleasing to the eye and nicer to drive than before. The GLE was launched with two diesel engine options – a 2.1-litre 4-cylinder 204PS unit that aims at the chauffeur driven car buyer and the 3.0-litre 258PS V6 mill for those who also like to drive their big burly SUVs. If you’d rather drive than be driven in, should you buy a GLE 350d then? Read on to find out.

The GLE is a facelift of the ML-Class. The things you need to spot that have changed on the outside are the headlamps, grille and bumper on the front of the car. The headlamps are now all-LED units with LED DRLs integrated in the cluster, the grille is larger and chunkier than before and the bumper gets its share of swoops to bring the SUV in line with the new Mercedes design language seen on the C- and S-Class. The profile stays the same so you get the characteristic sedan-like C-pillar and the blackened D-pillar as before.

At the back, besides the new GLE badge, the taillamp cluster has received a rethink. There are a set of fake exhaust tips surrounded in chrome while the actual pipes are hidden underneath and behind the rear bumper. Overall, the GLE doesn’t have an intimidating character but a pleasing one. It doesn’t have the presence of the BMW X5 or the Land Rover Discovery Sport, but it’s got the Mercedes badge up front and with that comes a luxurious cabin that a lot of buyers will pay top money for.

A new three-spoke steering wheel, rounded air-con vents and a large 8-inch infotainment screen aside, the interior of the GLE largely remains unchanged. Most other updates come on the features front. The un-lacquered wood garnish on the inside adds to the premium air around the cabin, the seats are comfortable and front ones are electrically adjustable too. The rear bench is nicely cushioned, offers good under thigh support and is high set. The GLE doesn’t get a third row of seats like the X5. It would be a compromise for the size of the car anyway, so we don’t mind its absence. What you get instead is a massive 690 litres of boot space, which goes up to 2010 litres with the rear seat folded down.

What’s a modern Mercedes without more features than you would expect? A non-existent one. The GLE 350d for instance is a soft-roader without the off-road engineering package that is on offer in international markets. Yet it’s got the cool gizmo that shows approach and departure angles, the angle of lock in the front wheels, and even which suspension is under load. In sports mode, it shows the direction and extent of gravitational forces at work. It could make for some entertainment for passengers on a winding road. Besides this, you get a large 8-inch infotainment screen, three-zone climate control, sunroof, superb detail in the 360 degree camera as well as a touch panel over the rotary knob to control the infotainment system. The GLE also gets an off-road raised ground clearance feature, that by the tap of a button on the centre console can increase the ride height by 60mm. The vehicle lowers itself at speeds over 80kmph.

The GLE 350d is equipped with the same 3.0-litre V6 as before and develops 258PS and 620Nm of power and torque respectively. It does the 0-100kmph sprint now in a claimed 7.1 seconds, 0.3 of a second faster than the ML, and that is courtesy of the new 9-speed torque converter the new GLE comes equipped with. It replaces the 7-speeder and is one impressive unit. The gearbox always seems to be in the right gear, more so in sports mode, and is willing to drop 3-4 cogs in an instant when the need arises for a quick overtake. You can amble along the motorway at 100kmph in ninth gearbox with the engine showing a lazy 1,200rpm on the dial. That’s fantastic versatility.

There is enough grunt in the V6 to maintain high triple digit speeds for long periods of time, and coupled with the low NVH levels and comfortable ride with the Airmatic suspension set in comfort mode, the GLE makes for one of the best long distance tourers I have encountered in recent times. The 350d has a smooth character to it, not like the uber eager X5. It is a bit slower and lazier around corners however, so if you want a better driver’s SUV, the X5 is more up your alley.

Ride and ease of driving rating_4.0_rating

You get five setup settings in the GLE – Comfort, Sport, Individual, Slippery and off-road. Off-road is obviously when you venture on lose surfaces, not the rock crawling kind, however, but most of the mild stuff the GLE can do with ease. Power goes to all four wheels and the tyres are acceptable 50 profiles. The slippery setting is meant for slush and ice. Put the GLE in comfort and the suspension is supple, the gearbox selects the higher, more efficient gear and throttle inputs have a nonchalance about proceedings. Rotate the drive selector knob into Sport and the suspension thuds through our roads but makes the GLE hustle ready. The gearbox is eager to please and the electric steering weighs up unnaturally. The ideal setting is individual, with the suspension set in soft with the steering and gearbox in sport.

Driving most modern SUVs with their electric steering and pliant ride around town is as easy as it can get, and with the GLE it’s no different. The view from the driver’s seat is excellent and the 360 degree camera and parking sensors make parking easy too. All these features help mask the size of the GLE.

The GLE, despite its big V6 nestled in up front, is a SUV that doesn’t intend to be a fast car. In a straight line, sure, but the weight, size and body roll make it a better highway car than one you would take to the hills. It’s got strong discs all around, and grip levels are impressive so the big GLE does stop well when you jump on the brakes. The all-wheel drive system splits power between the front and rear axles when and where the need arises, and with the help of ESP and traction control, will not let you understeer uncontrollably.

Undoubtedly the prime reason to buy the luxurious GLE is the engine-gearbox combination. Silky smooth, unhurried and hence with excellent cruising ability, the GLE is the one for long haul trips. NVH levels are low and ride quality in comfort mode is supple, the cabin is well appointed, and in-cabin flexibility adds to the versatility of the GLE. It’s not an enthusiast’s SUV due to its off-roading limitations and that lack of finesse around corners, but these are things it was never meant to ace at. The GLE is the SUV for the open road to munch miles tirelessly, and here it is completely in its elements.

Recommended Variant : GLE Class 250 d
Was this article helpful Yes No
Sorry about that