The WR-V is said to be more than just a Jazz with some butch livery. Does it feel like it? 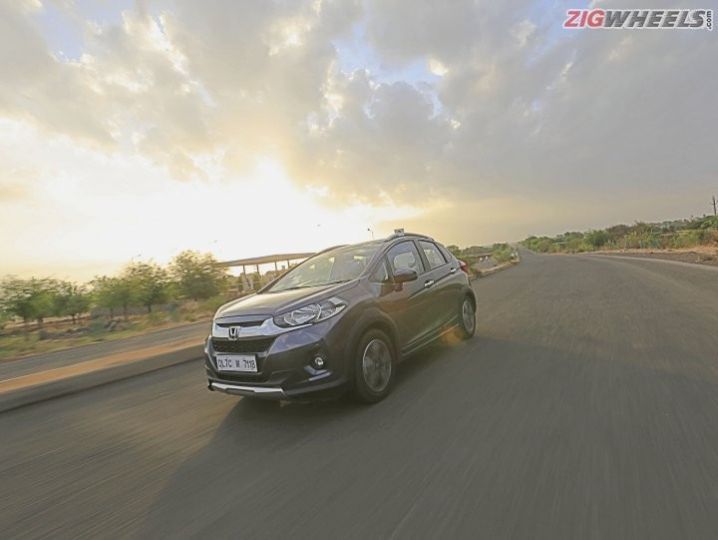 If you’d ask me why Honda developed the WR-V, I’d retort, “Why wouldn’t they?” Crossovers have been steadily gaining popularity with no signs of slowing down. To put things into perspective, the EcoSport is now old enough to go to kindergarten, but still remains Ford India’s primary domestic sales driver by a big margin. Don’t even get me started on the Vitara Brezza! The way they dress influences our decisions more than we would like to admit. The WR-V is looking to dish out a solid combination of butch looks wrapped around a package that is even more practical and usable. But, is it?

A lot of cross-hatches could be called pseudo-crossovers, but the Honda WRV is a very convincing one. Head on, it looks nothing like the Jazz, thanks to the flat face, chunky chrome grille and black cladding. The headlamps not only get boomerang-shaped daytime-running LEDs, but the cluster design is stubby and aggressive.

The side profile is where the Jazz DNA is most evident, but that’s primarily down to the character-line and silhouette. Otherwise, the WR-V looks truly distinctive and it’s not just because of the roof rails and 16-inch alloys. It’s 44mm longer and 57mm taller than the hatch it’s based on. Even the width is greater than the Jazz by 40mm and that’s largely down to the cladding. The wheelbase is also up by 25mm and this required rejigging the front and rear suspension points! At 188mm, the ground clearance is a healthy 23mm more than that of the Jazz, but don’t go snooping through the brochure looking for the water wading capacity. If you’re attending an off-roading class, expect the WR-V to get a doctor’s note so it can be excused.

Soft on the inside?

The WR-V is a bigger machine than the Jazz, but it’s still under 4 metres long. So the space would be just about enough, right? Well, no. The sense of space could obliterate claustrophobia as a concept. While you won’t have that commanding/SUV-esque driving position, you do get the sense you’re sitting in a car that’s longer than 4 metres. That segment-first sunroof just adds to the airy feel.

Seating five-up is easy but the middle occupant will want for more shoulder room. Also, the lack of adjustable headrests is just ridiculous and the integrated ones are too small and soft. The seat cushioning is a tad too soft, especially for long jaunts and considering this car’s positioning as something for explorers. After all, unlike the Jazz, this does get cruise control. Heck, you even get a 363-litre boot that’ll accommodate the average adult comfortably (kidnappers/Omni owners please note).

You also get nice touches like a steering that’s adjustable for rake and reach, and a can-holder in front of the driver’s AC vent. Also, modern cars have A-pillars that’re thicker than the US president, so the WR-V’s little quarter glass comes in handy at intersections. Somehow, the quality benchmark is similar for the tech and trim – just enough. There are hard plastics all-round, but nothing you’d call cheap. There’s no leather this or soft-touch that, but the upholstery is of a decent grade.

The 7-inch infotainment system has a simple UI and a decent list of connectivity options including MirrorLink and WiFi, which is great. However, the system’s inherent lagginess is annoying and ever present. Moreover, the setup looks like an aftermarket add on. Also, the lack of Android Auto or Apple CarPlay can’t be ignored when there’re cheaper cars that get both. Lastly, the air-con may have a cool touch-panel but using it on the move isn’t all that convenient. You do have to take your eyes off the road to operate it and even the cooling was weak in our 40-degrees Celsius test conditions, which also draws your attention to the missing rear AC vents.

With 100PS on tap, the WR-V’s 1.5-litre diesel is among the most powerful in the class. However, the on-paper numbers don’t translate to real world excitement, instead they dish out a lot of practicality for daily use. It’s a very easy and relaxed engine to drive. Turbo-lag is minimal and the turbo-surge is gradual. Factor in the light clutch and you’ve got a great city drive with part throttle inputs enough to hit 40-60kmph quickly. There is a fair amount of diesel clatter, though, and it’s particularly noticeable at city speeds, where you’re in lower gears. Overtakes do need a little planning since you won’t get that vigorous power delivery when you need it. Slam the gas pedal and there’s more noise than progress. Hover around 2000rpm, use the full 200Nm of torque, upshift early and the WR-V will give you little reason to complain.

During the 0-100kmph test, we quickly realised tickling the red-line is moot. Getting the 12.43 second time meant upshifting before 4000rpm was key, post which, the power simply vanishes. There’s no getting around the i-DTEC’s efficiency-focused nature, but that does pay off, especially on the highway. The added 6th gear helps the engine sit calm at just under 2000rpm while cruising at 100kmph and you can hit higher speeds without the engine feeling strained. The sixth-cog also helps get it an impressive open-road fuel economy of 25.88kmpl! That last gear does make a massive difference, which is why the city FE sits at 15.34kmpl – frugal standalone but over 10kmpl less than the highway figure.

So it’s for the family then?

Primarily, yes. Everything about the WR-V is designed for comfort, but it’s not a perfect execution. It shares a few suspension components with the HR-V to improve stability and bad road ability. The latter is true and the WR-V pummels through potholes/rough patches without a hitch, but the suspension does get too bouncy. The ride gets disconcerting even at 80kmph on smooth roads because there’s a noticeable amount of vertical and side-to-side movement – a brickbat for what is otherwise a decent tourer.

The steering is one finger-light for city driving but there’s no feedback through corners and a little more weight at speed would’ve made its highway mannerisms better. It would also benefit from a more progressive set of brakes. The 100-0kmph test was managed in 41.90 metres, which is commendable. But in everyday conditions, most of the pedal play offers very mild retardation with the lion's share of the stopping power kicking in sharply at the end.

The WR-V certainly does feel like more than just a Jazz with some cosmetic decking up. It deals with bad roads better and gets some unique features too. I would have gone out on a limb and called it a better tourer than the Jazz, had it not been for the bouncy ride quality and overtly comfort-set chassis. At Rs 8.79-9.99 lakh (ex-showroom Delhi), it’s priced on par with the competition and credit where it’s due, it’s a more extensive attempt at making a cross-hatch than what we’ve seen from Hyundai, Toyota or VW. But when the competition includes the Vitara Brezza, EcoSport and the i20 Active, the WR-V isn’t going to have an easy fight.

The WR-V comes close to living up to its promise of being THE most usable and practical car in the segment but falls short because of small oversights. A slightly stiffer suspension and simple additions like firmer seats and adjustable or at least large rear headrests would work wonders. While it certainly is a practical/usable package wrapped in butch looks, it doesn’t do that in a way that outclasses its rivals.

Check Out: Hyundai i20 Active vs Honda WRV