Driving one of the most iconic cars in the history of the automobile is a dream come true, no less! 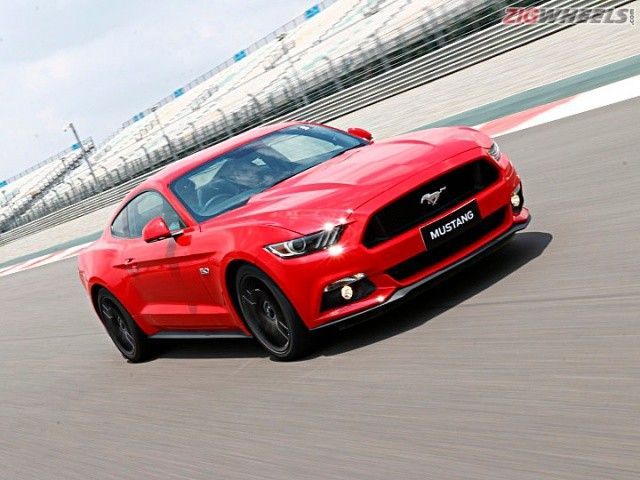 Mention muscle cars and I doubt you’ll find anyone who does not think of the Ford Mustang first. It’s car that enjoys a legacy like few others on the planet do, perhaps even better than exotics like Ferrari and Lamborghini. It is an icon in its own right, and one that needs no introduction. The Mustang has been in production for over 50 years now, and for the first time in its history Ford has introduced a right hand drive version. And thanks to that, this icon has finally descended from the posters in our rooms onto our roads.

Ford certainly deserves a pat on the back for making this possible – I know a significant number of enthusiasts with deep pockets who wanted to have the pony car parked in their garages. It is easily amongst the most popular names in the history of the automobile, and when Ford announced its launch in India, the car maker set tongues wagging across the nation instantly. I’d be lying if I said wasn’t one of them, and it was pretty obvious that I’d pull rank in office to attend the media drive of the car.

The venue for our rendezvous was to be the Buddh International Circuit. I was looking forward to mashing the loud pedal down the 1.2km long back straight at the track, and of course reel in some fast laps. But before that, the visual spectacle that the car is, I couldn’t help but soak in its beauty. The current generation Mustang is the sixth generation of the car, and retains the silhouette of the original with its long, low slung stance. It has the typical, mile long hood the way a muscle car should, with the obligatory bulge in the centre. The roof slopes towards the back before ending in almost a fastback like rear end, completing the GT look.

Try as you may, it’s hard to not appreciate the efforts of Ford’s designers, especially from the front. The classic Mustang grille has been retained with the pony taking its place of pride in the centre, and grille sits flanked between a set of narrow projector beam equipped headlamps that also incorporate vertical slats for the DRLs. The Mustang ups the style quotient with ghost lights under the ORVMs which project a silhouette of the pony on the ground. The rear three quarter is the most arresting angle to look at it though, thanks to the trademark three slat tail lights, dual exhausts and an ornamental diffuser.

Our drive was to be a six lap run, which meant we merely hopped in, held the steering wheel with a vice like grip, the right foot planted firmly as often as possible, without really soaking in the interiors. The limited time though was enough to notice that Ford has maintained a rather retro theme inside, with lots of chromed knobs and classic looking switches. The clocks are in sync with the theme, the tachometer and speedometer sitting inside two large chrome ringed pods. The chrome isn’t overkill though, and is a nice nod to the Mustangs of yore, giving the dash a classic look.

Sitting on top of the centre console are three chrome ringed vents for the air-con, below which is the 8.0-inch touchscreen for the infotainment system that gets Ford’s SYNC 2. I was pleased to note that Ford has retained the traditional handbrake lever, which adds to the feel. The bucket seats offer ample support and cushioning, leaning more towards the latter, also an indication of the comfort they offer. There’s space for two at the back, but neither is it too easy to get in, neither will adults be comfortable in there for long.

“Enough of ogling now, get going!” These words from my instructor and multiple rally champion Sunny Sidhu had me fumble for the starter button instantly. I was expecting the exhausts to emanate a deep rumble but it was a bit muted, courtesy the ever tightening emission norms. But the rumble from the engine at idle was typical of what the Mustang is known for, something I was looking forward to. And thankfully Ford has gone the full hog for India, launching only the GT version powered by the naturally aspirated 5.0-litre V8 motor. With 401PS and 515Nm of torque on offer, this is the one to lust after.

The first two laps were to be sighting laps , but I chose Sport mode right from the word go though, not really wanting to spend time in the other three driving modes, namely Race, Normal and Snow/Wet. The throttle was buried properly into the floor as soon as I exited turn 3 that leads onto the back straight. The thrust was instant, the 401 ponies getting a free rein. 1.2 kilometres were dispatched in a jiffy, the speedometer needle swinging across rapidly to touch the 220kmph mark. The response from the engine in fact was so good, the six-speed dual transmission had trouble offering quick enough shifts! The gearbox could have been quicker to swap ratios, apart from which it felt a bit confused about selecting the best ratio especially when I stepped on the throttle at corner exits.

There was noticeable understeer at exits, a result of the heavy front end. I noticed soon that every time I stepped on the gas a bit early to avoid this, the rear would begin to twitch. I made the most of this trait of the Mustang at turn 11 – I stepped on the gas early, causing the rear to step out instantly. A slight correction and a bit of throttle modulation was enough swing the tail out properly, planting a wide grin on my mug. Sunny being the rally veteran that he is, broke into a chuckle as if trying to tell me how much fun he’s had himself in the very car I was driving! The gratification was instant, but I also needed to assess the car in terms of handling and chose to drive clean rather than revel in the bucket loads of fun the Mustang is capable of.

A couple of laps later the brakes started to heat up thanks to the thrashing the car was being subjected though. I also realised that the car’s suspension – which is an all independent setup for the first time in the car’s history – seemed to cause some bit of body roll and was better suited to cruising fast, rather than put in hot laps. I thoroughly enjoyed the feel and feedback from the steering though as it feels precise, with a nice weighted feel at all times. The suspension and steering system should enable in making the Mustang a great everyday car, aided by the not-so-low 137mm ground clearance.

Six laps in the bag, it was time to return to pit lane. To sum it up, the Mustang is a great way to spend 65 lakh rupees (ex-showroom price in New Delhi). That in fact is quite a deal when you consider the legacy it boasts of, besides the fact that at its price the Mustang is the most affordable naturally aspirated V8 engined car. Then of course, you can’t really put a price to an icon. So if you really don’t fancy the quickest lap times or bother to seat four in your car, the Mustang is here. That’s apart from the fact that it will ensure you ‘arrive’ wherever you go with its iconic design, that legendary V8 rumble and of course entertain you with its tail happy antics.

View All
View All
Trending Ford Cars
All Ford Cars