The Aprilia SR150 now gets a sportier variant in the form of the SR 150 Race. But are the design and performance updates worth the extra money? 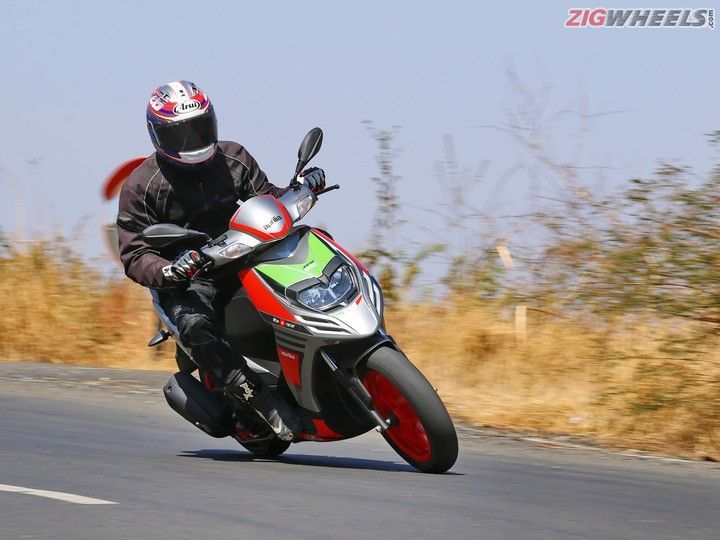 The Aprilia SR 150 Race is a sportier version of the sportiest scooter sold in India. The new edition of the SR 150 scooter sports MotoGP graphics and Aprilia claims that it has tweaked the engine to make it faster off the line. But are the performance gains enough and does it justify the Rs 3,000 premium over the stock Aprilia SR 150? Is the Race edition all about spending extra dough wiith no go? Let’s find out.

So what exactly has changed? Aesthetics, for one. The SR 150 Race gets a new glossy grey shade whereas the stock SR 150 sports a white/black colour scheme. The glossy finish adds a premium feel to the scooter. The new graphics are similar to the one on Aprilia's very own factory racing team's MotoGP bike. This should certainly delight MotoGP enthusiasts after all, it is the only scooter in India to feature a MotoGP-inspired livery.

The wheels and rear shock absorber, painted in a glossy red, look smashing in the flesh. The front brake calliper also gets a gold-coloured finish - the sort you see in premium superbikes. Overall, the Aprilia SR 150's aesthetics have been brilliantly executed and the scooter reminds me of the paddock scooters used in MotoGP races.

The SR150 Race uses the same 154.8cc air-cooled engine in the same state of tune. The carburetted motor makes 10.4PS @ 6750rpm and 11.4Nm of torque @ 5000rpm but the scooter does delivers slightly better performance. This has been made possible by revisions to the CVT gearbox that features quicker ratios. Aprilia claims that the bike is faster in the first 400 metres by a second. While the scooter feels sprightlier than the stock one and it darts forward up to the 20kmph mark, it is hard to quantify the performance gains and, for a clearer picture, calls for a proper performance test. For the record, the stock Aprilia SR 150 had clocked a 0-60kmph time of 7.21 seconds and a 0-100kmph time of 29.55 seconds while registering a top speed of 101.21kmph in our tests.

So is the difference in performance big enough to sway a buyer to consider the Race version over the stock SR150? We think not. Having said that, initial acceleration does count for a lot in city traffic riding conditions and the new scooter won't disappoint on that count.

The cycle parts remain unchanged and that's a good thing as the SR 150 Race was sporty enough to begin with. The SR 150 Race has a sharp turn in and the Thai-make Vee rubber tyres grip well and justify the sporty demeanour of the scooter. The telescopic front and monoshock rear damper are tuned for handling and feel stiffly sprung when compared to other scooters. This is a scooter on which you can be way faster in corners and also exploit better lean angles. The stiffness also translates to a juddering ride, especially the front that feels way firmer for our roads.

Braking, too, remains phenomenal thanks to the 220mm ventilated disc upfront clamped to a Bybre calliper. Under test, the stock SR 150 braked from 60-0 kmph in 2.83 seconds covering a distance of 20.92 metres.

Aprilia’s plans to roll out a race kit for the scooter which will include a tuned muffler that should improve both exhaust note and performance. There will also be carburettor upgrades in the form of bigger jets but that's all that has been disclosed for now. We expect the kit to cost around Rs 3,000-5,000.

The Aprilia SR 150 Race is priced at Rs 70,288 (ex-showroom Mumbai) - that’s Rs 3,000 more than the stock SR 150. The difference isn’t much and those who have already bought the Aprilia SR150 may feel disheartened but they needn’t as the SR150 Race is more of an aesthetic upgrade than a performance one. Yes, the SR 150 Race is faster but only marginally so. How much of an improvement the race kit adds to the performance is something that remains to be seen. We wish Aprilia could have used the opportunity to add a rear brake lock to the scooter and maybe a tachometer. But then it seems like there were price constraints at play.

So should you shell the extra dough and buy the SR 150 Race instead of the stock one? If you are a MotoGP buff, it’s a no-brainer - this is the only scooter in India to sport a MotoGP livery and that’s reason enough for you to have one in your garage right now! As for others, the new premium looking paint job and sporty graphics will definitely make you stand out. Forget getting it done from the aftermarket; that would cost way more!

The stock SR 150 remains the best bet for a proper sporty, fun-to-ride scooter with excellent dynamics and a powerful motor as far as scooters go. With the new SR 150 Race joining the party, it is the one to go for as the asking price hasn't risen by that much and what you get is an even sportier scooter. We can safely say that the SR 150 Race has now claimed the throne of the sportiest scooter in India.