We drive Volvo’s brand new luxury SUV, the all-new XC90. So does the new Volvo have what it takes to go up against the mighty German trio? Well, we find out... 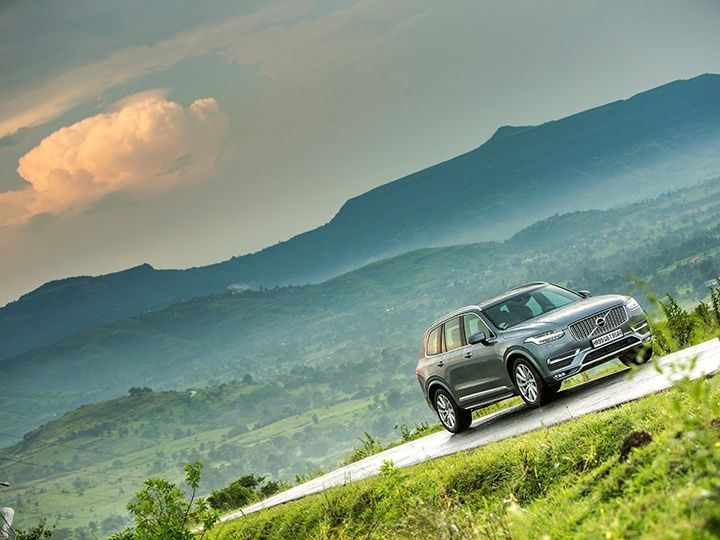 Every brand needs a product that takes its image and appeal and turns it upside down. Re-invent. That is exactly what the iPhone did for Apple, and we all know where that story goes. The same principle applies for automobiles too. Every few decades or so, every brand needs a major shake up to make it appealing once again. Volvo, a brand known for its impeccable reputation when it comes to making safe cars, but has never been on the forefront of the luxury car market in India or across the world for that matter. Now though, with the new XC90, we think all that is about to change.

So lets start with styling. The new XC90 looks like nothing Volvo has ever made and that is a great thing. Just like everything Scandinavian, the Volvo XC90 doesn’t find the need to scream out when it comes to design elements but employs a rather subtle way of showcasing itself. From the large headlamps that come with a ‘Thor’ inspired daytime running light to the huge gaping grille that comes in two distinct finishes depending on the variant you choose, nothing on the XC90 seems to be in excess.

We drove the top of the line version i.e. Inscription, which incidentally is also the most popular variant of the car globally. The Inscription also gets a set of 20-inch multispoke wheels, a subtle chrome garnish on the side and of course, the satin silver grille with a chrome surround. If you are familiar with the way the older car looked however, you cant mistake the XC90 for anything else when viewed from the rear. With the tail lamps paying homage to the first generation model with a modern twist of course, the new XC90 seems to seamlessly blend design elements.

The new Volvo XC90 is also much larger than what it used to be. Of course, this is mainly because Volvo have now positioned it to go up against cars like the Audi Q7 and the upcoming Mercedes GLS and move up in terms of positioning compared to what the older XC90 was. But that’s not all. The XC90 doesn’t seem to be bulky and cumbersome when seen in person while still managing to have the road presence you might expect from a luxury SUV.

The Volvo XC90 has been globally acclaimed to have one of the finest interior in its segment and now having driven it for a whole day, we know why it has received so much acclaim. Contrary to what people expect from a luxury car, Volvo has taken the bold step to eliminate almost every single button on the centre console and replace it with one large and almost tablet like screen. In fact, if we remember correctly, we counted only 8 buttons on the XC90’s centre console and if you compare that to the likes of say an XC60 which has a button for almost everything, you would know what we are talking about.

But its not just the screen (more on that later) that deserves a mention. It is the overall thought that has gone into a car like the XC90 that really deserves a large pat on the back. Simple things like the rear view mirror which are usually exempt from any sort of styling impetus has been made I genuinely want to take it off and take it home with me. And then there is the light wood finish on the XC90, the design and grain of which is set in a way that it meets in the centre at a perfect angle making every Ikea enthusiast extremely proud indeed.

There is even a though that goes into designing the seats. Every contour is there for a reason and they are there to ensure that you stay comfortable even after being in the car for a good eight to ten hours of driving. And thankfully, the front seats go get both a heating and ventilated cooling option, a feature that should be a must for every car sold in India! The rear seats too are really comfortable and offer great support. Not only do they recline but also move slightly forward just like the seats in a movie theatre for example. The middle seat on the second row also doubles up as a child seat and although we do not see many Indian customers actually utilizing this feature to the max, it is a good addition to the car.

The last row of seats are usually useless for most adults, but in the case of the Volvo XC90 are surprisingly spacious and can easily fit adults who are about five and a half feet tall with no real hassles. Both the rear rows to fold flat of course and result in over a 1000 litres of storage space.

Being a luxury SUV, you would expect the equipment list on the new XC90 to be long and it is. So lets list out a few things you get. For starters, you get a phenomenal Bowers and Wilkins entertainment setup with more speakers than Kanye West would have in his recording studio. And you get a sound experience that ranges from a studio setup to that emulating an opera house. And if you, like me, are an audiophile, this would be a huge reason to consider the XC90. You also get a handy heads up display that showcases relevant speed information and navigation aids and the new CleanZone climate control techonology that ionizes the air and keeps of most particulate matter and dust. Of course, being a Volvo, you get a whole host of active aids (like seven airbags as standard on all variants) and passive safety aids like a boron steel structure that officially make this the safest car in the world today.

And then we come to the reason why most auto journalists have been raving about the new XC90, the large infotainment screen. The large centrally mounted 9-inch screen, as we mentioned earlier, is as good as an iPad and is extremely easy and intuitive to operate and read. You do get to scroll and flip through pages just like we are so used to doing on a tablet and even use a pinch function when it comes to maps. What we love most about the screen is how everything looks absolutely minimalistic with no unnecessary graphics taking centre stage. The font and color choices used too are clear and make operating it extremely easy.

The Volvo XC90 comes with a 2.0-litre turbocharged diesel engine. The mill makes 225PS of peak power and 450Nm of torque. Now these figures might not seem to be very impressive when compared to some of its competition, but then Volvo has never really been about performance anyways. The engine is mated to an eight speed automatic gearbox and an all wheel drive system. Now although the XC90 is not really brisk and will not make you sink into the seat every time you thump the throttle, it isn’t exactly a slow mover either. In fact, we were pleasantly surprised by how linear the power delivery is and how smooth this large SUV feels in general. That said, as we mentioned earlier, do not expect the XC90 to come out on top in a game of trumps vs its German rivals. And in any case, considering the fact that most XC90 customers are chauffeured around, power doesn’t really matter. What does matter though is ride quality.....

Ride and ease of driving:  rating_4.0_rating

The Volvo XC90 in India will get the air ride suspension as a standard fitment across all the variants. The air ride suspension offers four modes, eco, comfort, off-road and performance. The difference in ride quality when you cycle though the modes of course is very noticeable. Where the XC90 feels really wafty and comfortable in comfort mode you can immediately feel everything stiffen up when you switch to the more performance-oriented setting. There is though a noticeable thump that the XC90 lets through when you go over a sharp pot hole but strangely the thumping seems to be much less when take the same rough section at higher speeds. However, as mentioned, the car does feel a little uncomfortable traversing rough road sections especially when paired with the huge 20-inch wheels. All said and done though, the ride quality on any normal road is pretty impressive both in the front and in the middle row, which for a car like the XC90 is of utmost importance.

The Volvo XC90 gets an electric power steering setup and although it is extremely light and easy to use, it does take a little away from steering feel. But again, as we have mentioned earlier, Volvo’s have never been about performance and we prefer the direction they have taken for the XC90 too. The steering does feel really light and despite its size, the XC90 is very easy to turn around or maneuver in tight spaces. Although we haven’t really had the chance to test its high speed handling characteristics, at lower speeds and through the twisty mountain roads that we drove the car on, it did feel really sorted. Braking too seems adequate enough but the pedal does lack feel and tends to get spongy when the car is pushed to its limits.

Priced at Rs 64.90 lakhs for the Momentum variant and Rs 77.90 lakh (ex-showroom, Delhi) for the Inscription model that we drove, the Volvo seems like phenomenal value for money when compared to its German rivals. In fact, with cars like the Land Rover Discovery Sport priced at about the same price as the entry level XC90 the Volvo does seem like a steal as compared to its more established competition. Coincidentally when we enquired on what percentage of buyers in India have opted for the top of the line variant vs the entry level, the result was a staggering 100% who had opted for the Inscription variant.

The Volvo XC90 is a very interesting proposition not just for the individual who wants something slightly different and unique from his luxury car but for every luxury car buyer who doesn’t really care about 0-100kmph figures and cares more about interiors comfort and of course ride quality. And considering the fact that Indian luxury car buyers are generally chauffer driven, the XC90 fits the bill perfectly. Yes, it might not be as good to drive than most of its German rivals, but as a complete luxury package, it truly outshines everything. Would we choose it over all its rivals then? Well for that, stay tuned to ZigWheels.com