We find out how special the two newly introduced Renegade models are. 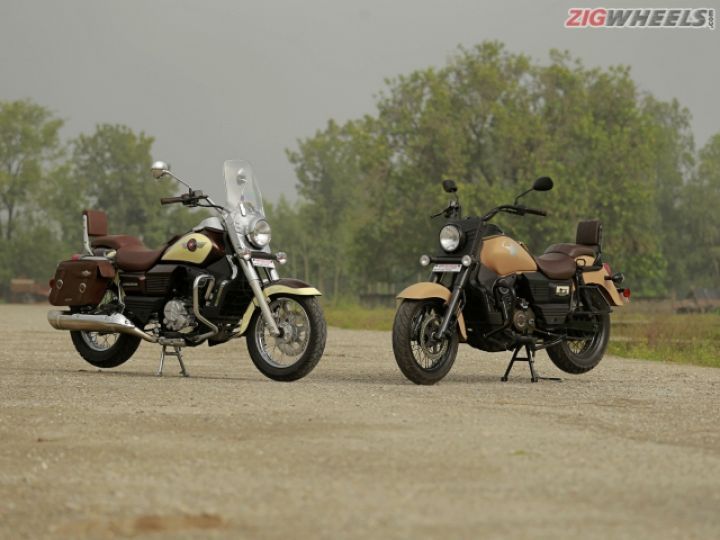 When one says that he is looking for a bike with classic styling in the 300cc to 500cc segment, the only thing that currently comes to mind is Royal Enfield. Royal Enfield. But that scenario is now changing and changing fast, as more and more manufacturers aim at entering the entry-level cruiser segment. And among the first to enter this segment is the American manufacturer, UM Motorcycles. The company initially unveiled its lineup at the 2014 Auto Expo, and entered the Indian market by launching the Renegade series at the 2016 Auto Expo. The pricing of the bikes initially spiked a lot of interest in many as this was a segment with not much to choose from when it came to displacement, styling and pricing. With the aim of broadening its footprint in the fast growing entry level cruiser segment, UM Motorcycles has now introduced two new variants to the Renegade series, the Renegade Classic and the Renegade Commando Mojave. So do the two models offer the personality and experience to make UM showrooms the place to head to for cruiser aficionados?

Although the two motorcycles share most of their design elements with the currently available Renegade range, there are some noticeable additions in terms of design and accessories.

Let's have a look at the Commando Mojave first. It is an exact replica of the Commando, but what is different is the new sand-coloured matte finish paint job, the fabric tank cover and saddlebag offered as standard.

The Renegade Classic, on the other hand, is clearly inspired by bigger American cruisers, specially the outgoing Harley-Davidson Heritage Softail. There is a large windshield visor, a tank cover and saddle bag with artificial leather available as standard. Paint quality is also good, and the same could be made out from the consistent tone of paintwork on the Mojave and the Classic. The bikes also get chunky front and rear fenders, which enhance their cruiser centric styling.

There is no instrument cluster on the handlebar; instead, the cluster finds its way bang in the centre of the fuel tank, putting it completely out of sight of the rider. The instrument cluster features a USB charging point, a large blue-lit analogue speedometer along with a small LCD unit for the gear indicator, odo, trip and fuel meter that is hard to read in one look.

Speaking of the 18-litre fuel tank, there is no change to its shape. Visibility from the rear view mirrors on the Mojave, despite the short stalks, is brilliant . On the Classic though, the round, chrome-finished mirrors fail to offer enough visibility. The cruiser appeal on both the bikes is further strengthened by the wire spoke 16-inch front and 15-inch rear wheels. Components like the front suspension casing, the rear spring coils, side panels and the grab rails, which all come in black on the Commando Mojave, are replaced with chrome-finished components on the Classic.

Overall, both bikes look attractive in their respective skins. And the same was confirmed by the number of eyeballs that the bikes managed to attract as we rode them around.

However, when looked at closely, both the bikes seem to carry their fair share of quality issues. The fit-finish wasn’t up to the mark, and the same could be seen from the plastic side panels and the plastic fitting around the radiator. The lacklustre quality could even be seen on the switchgear, as it seemed to be built with a compromise on pricing, with somewhat sticky working switches.

There’s no overflow gutter around the fuel filling port, which could lead to an invariable flow of fuel over the tank, causing leftover stains, especially on the matte paint job of the Commando Mojave.

Both are powered by the same motor that’s seen on the Sport S and the standard Commando, a 279.5cc, single-cylinder, liquid-cooled engine that is now fuel-injected to comply with BS4 norms. However, both the bikes we received had fueling issues. They switched off completely while riding, and had an otherwise constant judder at low speeds.

On the whole, though, the short-stroke motor is quite peppy. There is a sense of urgency when you rev, with a strong midrange and an acceptable 25.15PS on tap. It certainly isn't the most refined motor to ride, and while there aren't too many vibes when you cruise around at low speeds, they do tend to build up as you start revving the motor hard, especially after 50kmph, wherein vibes are felt on the handgrips, clutch and the brake levers.

Peak torque produced is 23Nm, which although pretty good on paper, doesn’t really do justice in offering the required surge from an engine showcasing such a displacement. This could also be due to the fact that UM has chosen to go ahead with tall gear ratios for the six-speed gearbox. As a result of this, you often need to shift down to get a move on. Gears shift in a slick manner, finding neutral though thus take some time. Also, the gear down shift lever is a bit short, due to this the rider has to take added effort to slot in the required gear.

The Renegade’s chassis is a simple but effective dual-cradle frame. Ergonomics are typical of what you would find on cruiser motorcycles. They are designed to comfortably cover long distances. I am 6 feet tall and the raised handlebar, with the front-set footrests and the low seating, didn’t seem to tire me at all. The seats are also well cushioned and offer just the right amount of padding for long stints.

The suspension up front consists of conventional telescopic forks, with twin hydraulic shocks at the rear. In the standard setup that I received the bikes in, they seemed to be set up a bit on the stiffer side. At around 30kmph, the bike was able to soak up bumps much more efficiently. In terms of handling, the Renegade’s pretty easy to manoeuvre, despite the 179kg kerb weight.

Mounting the bike on its main stand, though, requires a lot of effort. We didn’t get a lot of time with the bikes, due to which we weren’t able to get hold of some decent corners to test these machines on.

When it comes to braking, the Renegades come equipped with a 280mm front disc and a 130mm drum at the rear, which shed speed rather well. But there’s absolutely no feedback from them and they feel very wooden on application.

UM Motorcycles has priced the Renegade Commando Mojave at Rs 1.80 lakh and the Renegade Commando Classic at Rs 1.89 lakh (ex-showroom, Delhi). The pricing is competitive indeed and puts the two in Royal Enfield territory. But whether it justifies the kind of build quality and fit-finish that is on offer, is still arguable. The bikes definitely do feel refined when compared to the Royal Enfields but the inconsistency in fueling is rather worrying for us at this point. As far as the competition goes, the bikes are here to rival the Royal Enfield Classic 350 and the Thunderbird 350. Stay tuned for further insights on the real-world performance of these motorcycles, as a comprehensive road test will follow soon.

There’s no denying that these motorcycles have got the appeal that riders are looking for from a cruiser. The UM Renegade Commando Mojave and Classic pack appeal, comfortable ergonomics and ride quality, however, the package needs to up its reliability and overall finish before you see UMs flooding Ladakh.