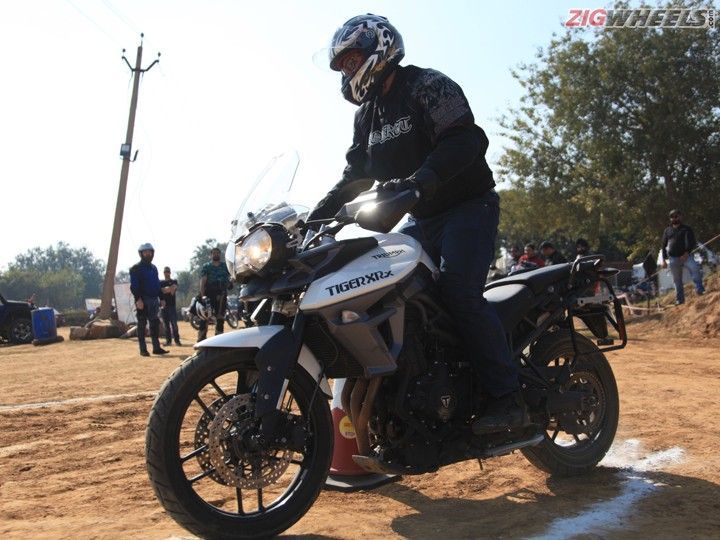 “Don’t worry if you fall, falling is a part of off-roading and the more you fall, the more you will learn” said Vijay Parmar, our instructor for the day at the Triumph Tiger Training Academy. He needs no introduction, as he is the man behind the Raid de Himalaya, one of the toughest rally-raids in the world, and a hardcore biker himself. His hair might have greyed over the years, but even now Parmar competes in the Desert Storm, the annual rally-raid held in the desert of Rajasthan, as he loves riding off-road more than probably anything else. And that was visible almost as soon as he straddled the Tiger.

He had made the statement in response to a query in the classroom session at the start of the school, held at the Off-Road Adventure Zone in Gurgaon. Triumph is the first manufacturer to organise a riding school for its customers, and considering that full-sized adventure tourers can be quite a handful given their size, it only makes sense to learn a thing or two about riding them off tarmac. Ours was the basic course, to help riders ‘acclimatise’ themselves to the concept of riding off-road, though there are two more advanced levels of the Tiger Training Academy.

Triumph also organises off-road rides for customers to help them experience what their own motorcycles are capable of. First things first, I’m not an off-roading enthusiast, be it on four wheels or two. I love asphalt and stability, and almost all of the riding that I have done in my life has been on paved roads, broken yes, but paved nonetheless. After familiarising us with the Tiger XRx, Parmar proceeded to throw everything I knew about riding right out the window. Off tarmac you aren’t supposed to lean into corners. You can’t move with the bike, yes you work together as a unit but the rider does the opposite of what the motorcycle is doing.

First up, we were instructed to stand on the pegs and grip the tank tightly with the insides of our knees. Next, unlike the technique of keeping your arms parallel to the ground on tarmac, off it you need to lean forward and grip the handlebars with your arms at right angles with your elbows and you essentially act as a pivot to the bike. Your legs and arms move with the suspension, with the arms providing that little extra damping so your torso and head stay stable and you don’t bob up and down. It’s all to manage your body weight well. When you dip the bike into a bend, you let it go away from you but keep your legs firm on the pegs so in case the motorcycle dips more than you want it to you can put pressure on the outside peg to straighten the bike.

And that’s just the theory of it. Our first course was a slalom through some closely placed cones. Next up was the figure of eight, again through cones. Everything had to be negotiated at 5-7kmph, standing up. Any faster and you’d overshoot the turning points. I got on the bike (hoping to not fall off or look like an idiot) and lined up at the start. Go! Came the instruction and I rolled off the line gingerly. Standing up and trying to maneuver a 250kg motorcycle wasn’t going to be easy, especially with 95PS of power and 79Nm of torque at the disposal of your right wrist. But if you get your balance right, the Tiger complies happily. Its only limitation was me. It’s instinctive to go for the brake if you feel the bike is getting away from you. You do that here, you tumble to the ground as was demonstrated by a few participants.

The trick was to forget the bike has a front brake. You shed speed and play with the clutch, and given the Tiger’s inherent weight balance and the strong low to mid-range torque that was enough. I was quite happy I was getting the hang of it, but my satisfaction was premature as I soon found out. The next course was about getting used to bike’s power and response and was set over two consecutive and quite steep camel back humps. Instructions – the clutch is your enemy, the moment you set off, forget that you have one. Gather momentum, reach the top, brake a little, go down, immediately climb again and down again followed by a left turn. It went perfectly, until the final hump.

One little twist of the wrist and the linear yet immediate torque delivery sent me hurtling towards the top, I cut the throttle, went down, a little twist and up the second one, feeling really good now. I cut the throttle again, but I was carrying too much momentum. It took me three seconds to realize I had broken through the bunting tape and went halfway to the third hump, panic braked, stalled and depressed the clutch. But by the time I could gather what was happening, my instincts had ensured my fall and now dust was filling my helmet. I dusted myself off and lined up again. It turned out I was in the road mode. The Tiger I was riding, the XRx, comes with three riding modes. Road, Off-Road and rider.

We were to be in Off-Road mode, where traction control is turned off but ABS stays on so you can slither down steep descents, as ABS cuts in on the front wheel only. TC needs to be off as the bike tends to slip on loose surfaces and the last thing you want is TC to cut power while when you’re climbing up or slithering down. This time I got it right. The next course took us into a ditch with a steep gradient in and out, while the insides were made of loose mud. We were to go almost to the other side, stop and roll back down and then finally climb out. The point? How to come back down safely in case you stall on an incline, one of the most common problems faced off-road.

I rolled up and the Tiger went effortlessly through it all, just wiggling its tail a little before it darted for the top. Near the top, I engaged the kill switch. “LET GO OF THE CLUTCH” roared the marshal. I let it go of fear, more than anything else, and the bike stopped dead. As instructed, I nursed it back to the base by tapping the clutch as it slid steadily down the slope to roar back up again. Past the slope, the other two humps were tackled with grace this time. And I emerged rather smug on the other side. The next two were a combination of a previous stage but past the hump the route led us into a deep ditch, post a steep gradient decline before getting out on the other side. This time it was the loose mud that caught me out.

It wasn’t just me though. Almost everyone who rode fell at some point, even Parmar himself. But when you got it right, it always brought a smile to your face. When the day got over, I headed back with a smile, content with the day’s experience and learnings, and credit goes to Parmar’s teachings, but more importantly, the Tiger 800 XRx I was riding. We take these big bikes to be fragile machinery but the Tiger proves that to be a myth. The bikes fell, slid, one even plummeted, suffered broken flyscreens, broken levers and mangled hand guards but they simply dusted themselves off and were ready to carry on even if their rider had second thoughts.

It was easy to how see how tough the bike is, and that’s what truly gives an adventure tourer like the Tiger its go-anywhere credentials. More importantly, the bike also gave us a lot of confidence to ride it the way we were asked to, even though the techniques and tasks were completely new to us. The bike’s well-balanced handling and strong bottom-end grunt helped as well. Of course, this was my first taste of off-roading on a motorcycle, and I felt the bike has a lot more potential to be tapped that I had that day.

It isn’t without reason that the Tiger 800 is doing excellently for Triumph in India. That said, I do have a long way to go to be able to use the bike to its full potential!