Top Bike News Of The Week 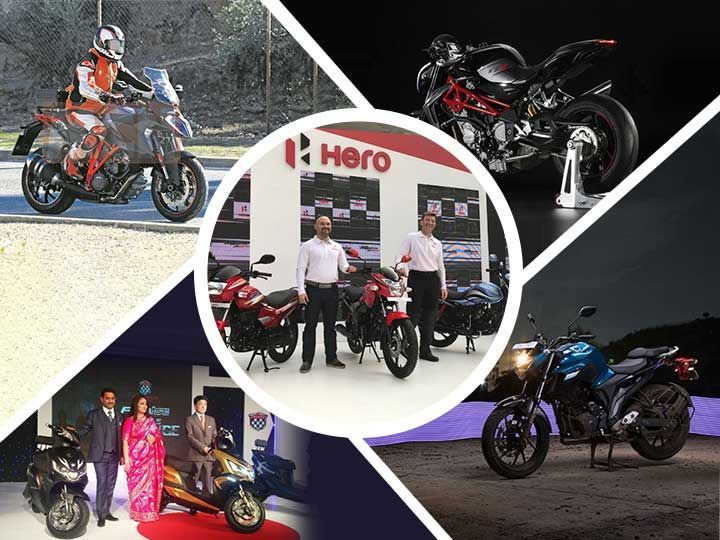 This week, we witnessed a couple of major launches and heard some interesting news as well. In case you didn't get a chance to catch up, here are some of the highlights to get you up to speed.

After launching the Ridge e-scooter earlier this year, Rajasthan-based company Okinawa launched its second offering, the Praise. The specs of the e-scooter make you sit up and take notice. Some of the standout features include the sporty moto-scooter design which lends a breath of fresh air when compared to other conventionally-styled electric offerings. The Praise’s motor produces 2.5kW of power and 18-40Nm of torque, which is the best in its class.

It offers a range of 170-200 kilometres on a single charge too! When it comes to features, the Praise is no chump. It is equipped with an anti-theft sensor, keyless entry and a front double disc brake. The Praise will start arriving at dealerships starting early next year with a price tag of Rs 59,899 (ex-showroom Delhi). Bookings are set to commence soon. Considering the Praise’s price point and list of features, we believe it offers great value for money. The Praise competes against the Hero Photon and the Hero Nyx e-scooters.

Hero MotoCorp unveiled three ‘new’ commuter bikes for 2018 - the  Hero Passion Pro, Hero Passion XPro and the Hero Super Splendor. The Passion Pro and the Passion XPro now get the same engine as the Hero Splendor iSmart 110. The 109.15cc, air-cooled, single-cylinder motor produces 9.4PS of power and 9Nm of torque, which the company claims is a 12 per cent increase over the older motor.

The Passion Pro has also received some cosmetic changes in the form of an updated tail light, automatic headlamp on (AHO), a side stand indicator, new graphics, new turn indicators and a new rear mudguard. The Passion XPro now features a sharp and edgy design with body graphics, LED tail lights, AHO, a new exhaust and turn indicators along with a new semi-digital instrument cluster. Also new is the introduction of Hero’s i3S technology and an under seat USB charging port.

The Hero Super Splendor remains more or less the same. It continues to be powered by the same 124.7cc, single-cylinder engine capable of producing 11.4PS of power and 11Nm of torque. According to the company, that’s 27 per cent more power and 6 per cent more torque than its previous iteration. The changes come in the form of a three-pod instrument cluster, new indicators, a side stand indicator, AHO and a redesigned centre cowl.

So far, Hero has not disclosed the prices of the new bikes. However, it has assured us that deliveries will begin from next month. It took a surprisingly long time for the company to finally update their current motorcycles with new engines. Of course, we would like to see this progress continue.

If reports of MV Agusta buying back its shares from Mercedes-AMG for complete ownership of the MV Agusta Holding Company wasn't surprising enough, the iconic Italian marque has also announced that it has started working on a new four-cylinder motor. This makes perfect sense when you consider the fact that the current inline-four engine made its debut way back in 2005 with the MV Agusta F4. Since then, the motor has certainly shown signs of ageing, especially when compared to modern four-cylinder powertrains from rivals.

The company has confirmed that it will launch the new four-cylinder motor sometime next year. If we were to take a guess, we’d say it will most likely happen at the 2018 EICMA in Milan, Italy. Rumour has it that the new engine could be a 1200cc unit. The current engine has a displacement of 1090cc. However, what could be the first bike to get the new motor. While we certainly hope it would be the new F4, the chances of MV Agusta plonking the motor in the Brutale, the bike makers most popular offering, seems more plausible. We hope this new engine makes its way to the Turismo Veloce as well to make it a worthy competitor to the Ducati Multistrada 1260S and the Triumph Tiger 1200.

With ever-increasing emission norms, it's no secret that many automobile giants across the world are moving towards electric power. If reports are to be believed, the latest auto major to join the bandwagon is Yamaha. In a recent interview, a top company executive was quoted saying that the company is evaluating the possibility of launching electric two-wheelers in India. Yasuo Ishihara, managing director of R&D, Yamaha Motors, said "We are at present conducting a feasibility study in this area (electric two-wheelers). Yamaha has an edge in this segment as we already have electric mobility products in other countries. Transferring such products to India will not be so difficult."

The Japanese giant is also conducting studies to see if EVs can be a complete replacement for internal combustion engines. Along with it, the company also plans on investing heavily in power units, batteries and infrastructure development. Yamaha is certainly late to the electric mobility party, but considering their history in churning out top-class motorcycle engines, this might just be our best bet for the future.

It's no secret that the KTM 1290 Super Duke GT is a fine sports-tourer. However, spy shots of a test mule suggest that the Austrian bike manufacturer is working on an all-new version of the motorcycle. From the pictures, it’s quite clear that the new bike will have a different headlamp unit. The new headlamp looks quite like the one seen on the Super Duke R. The new fairing sits a bit lower and stretches out further than the older model. The windscreen has also been made larger to reduce windblast.

Other changes include an all-new TFT instrument cluster borrowed from the 1290 Super Adventure range. Apart from navigation, this display also lets the rider toggle through different settings and riding modes. Small changes to the engine casing indicate that the engine has been reworked too.

What's not changed, however, is the frame, suspension, wheels and brake setup. Will the newer model make its way to India? We believe KTM could seriously consider launching it here as both Triumph and Ducati now offer the Tiger 1200 and the Multistrada 1260, respectively.