From Kawasaki to Royal Enfield, here are some of the quickest bikes you can buy right now under Rs 5 lakh 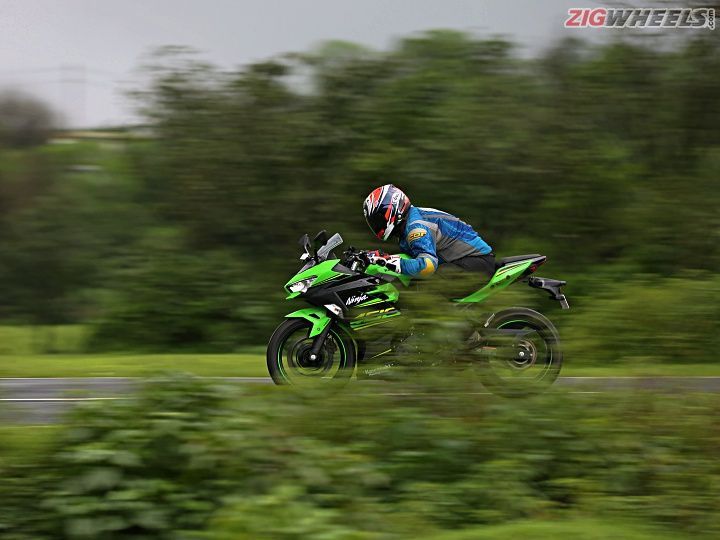 Since the past few years, motorcycles are no longer viewed as mere tools for commuting. With each day, more and more enthusiasts are leaning towards performance-oriented machines, designed to tame the track or the highway. If you happen to be one of them, here are some of the quickest motorcycles under Rs 5 lakh that we’ve tested in 2018.

Adventure-tourers and quick aren’t two words you’d often associate. Sure, there are many ADVs out there which are very quick, but we often see them as all-terrain conquering machines. At least that's what we thought with Kawasaki's Versys-X 300.

To our surprise, the bulky looking adventure-tourer is as capable on the road, as it is off it. Packing the same 296cc parallel-twin engine as the Ninja 300 which churns out 40PS of power and 25.7Nm of torque, the baby Versys sprinted from 0-60kmph in 3.41 seconds, while the 0-100kmph was achieved in 8.3 seconds in our tests!

Considering the Versys-X 300 made the list, it was only obvious that we were going to include its faired cousin in the list. While it has the same engine as the Versys, the Ninja 300 trades in off-roader traits for a more aggressive design with sharp aerodynamics. The inspiration from Ninja ZX-10R is quite evident here. It is no surprise then, the Ninja 300 feels more suited for spirited riding. Not to mention, at 179kg (kerb), it is also 5kg lighter than the Versys X 300 which weighs 184kg (kerb).

While TVS’ flagship, the Apache RR 310 hasn’t been the sales success that the company expected it to be, it did manage to leave an impression on us. And for a good reason - thanks to the collaboration with BMW Motorrad, the RR 310 uses the same 312.2cc single-cylinder liquid-cooled motor derived from the BMW G 310 R and the GS. Power figures remain identical at 34PS, however, it’s generated 200rpm higher, at 9,700rpm. Torque figure remains similar at 27.3Nm at 7,700rpm. As a result, the bike can manage the 0-60kmph sprint in 2.86 seconds, while 0-100kmph is achieved in 7 seconds.

Ever imagined a Royal Enfield bike competing with the likes of Kawasakis and even beating them to the punch? Yes, that’s how much of a jump the RE Interceptor 650 and the Continental GT 650 have been in terms of quality and refinement. Packing an all-new 648cc parallel-twin engine, which makes 47.6PS of power and 52Nm of torque. The motor is mated to a 6-speed gearbox and it’s the first production Royal Enfield bike to feature a slipper clutch. While on paper, those number may not look that impressive, but it did help the bike to go from standstill to 60kmph in 2.87 seconds, while 0-100kmph was done in 6.54 seconds.

Taking the top spot on our list is the newest member of the Ninja family, the Ninja 400. It is the "perfect 400cc bike for India". In short, it is the bike the Ninja 300 should've been. A perfect pocket-rocket, true to its family name. Powering the bike is a 399cc liquid-cooled, parallel-twin motor based on that of the Ninja 300. However, the larger displacement and improved internals help it generate 49PS of power (10PS more than Ninja 300) and 38Nm of torque (11Nm over the Ninja 300).

Not surprising then, it is by far the quickest bike we've tested in this category. 0-60kmph takes 2.44 seconds, while 0-100kmph is achieved in 5.40 seconds. Numbers aside, the bike just feels faster, with enough pull to put a grin on your face. That said, its ridiculous pricing is just hard to overlook.